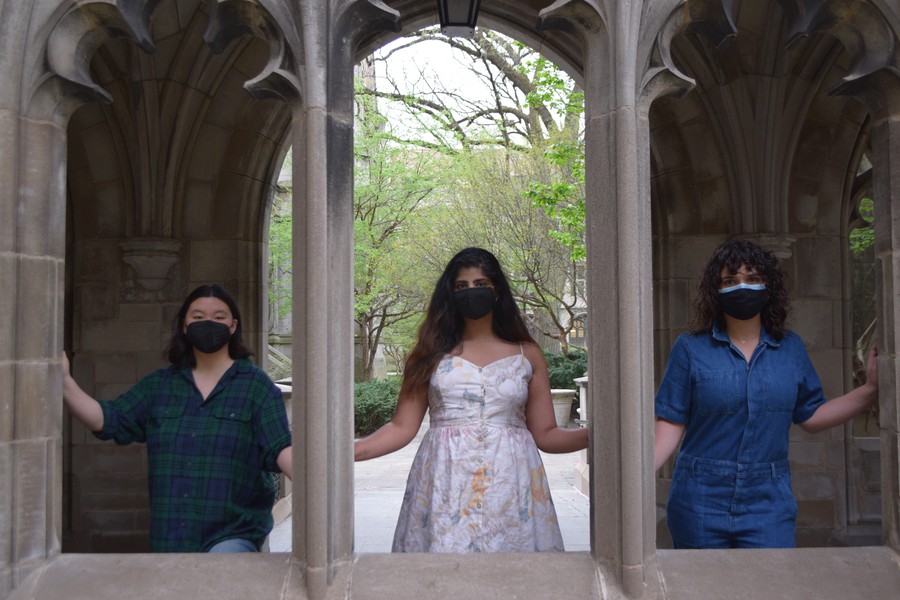 Thrive described its platform as centered around “transparency, advocating for marginalized groups, and reconnection.”

While Kumar and Wang have been involved with SG since their second year, DePompei only got involved this year, contributing to SG’s COVID-19 Committee, which was established “to create additional channels of communication between students and administrators in regards to the pandemic.”

“I never felt like any of the policies touched me,” DePompei said of her previous impression of SG. “All that pretty much changed this year with the work of College Council (CC) in particular. Suddenly, Student Government seemed way more accessible…with the advocacy around pass/fail policy and around the academic calendar. I was super impressed.”

Both the pass/fail and academic calendar policies pursued by CC were propelled by vocal student demands. Thrive consistently emphasized its commitment to listening and responding to students.

“What's unique about us is that, you know, we're not just standing here and being like, ‘Here's the platform that we wrote’ without talking to anyone about it or [only] talking to a few groups,” Wang said. “It's really important to us to uplift other people on SG and acknowledge that they have really brilliant ideas.”

The slate has met with almost two dozen groups, such as UChicago Quest+, #CareNotCops (CNC), performance RSOs, and Students for Disability Justice, over the past few weeks. The slate has also committed to maintaining quarterly meetings with them after taking office.

Many of the ideas from those meetings have already been incorporated into Thrive’s platform on its website. These include many of its policies to advocate for first-generation, low-income (FGLI) students and students on leaves of absence.

“We want to make sure that not only are we crediting them for these ideas but [that] these are ideas carried out [according to] the visions that they had,” Kumar said.

Thrive has committed to a set of policy goals to accomplish within the first hundred days of taking office on June 13, such as reinstating the 10-week academic calendar, increasing accessibility accommodations, and establishing a student advocacy office (SAO).

“A lot of our platform is small, measured steps that will have a tangible impact on every student's life,” DePompei said. “I want to see people be impacted positively now. And I think we know that and we're going to do that.”

On the Academic Calendar

In February of last year, it was announced that the University would switch to a nine-week quarter system, effective autumn 2021. Undergraduate students have expressed dissatisfaction with this switch and Thrive hopes to work with University administrators to return to a 10-week quarter.

“Admin is oftentimes very responsive to conversations driven by data,” Kumar said. “Luckily for us, CC has actually put out a survey regarding student attitudes towards the academic calendar. I think I've received about 800 student responses…and the average rating was like a 1.5 out of five for how students felt about that calendar.”

Thrive also wants to address the shortcomings that led to the creation of the new nine-week schedule. “A lot of that was driven by career prospects, like students not being able to have their summer plans…. We really want to find ways to work around that… [such as whether] standardizing petitions for early finals would be possible,” Kumar said.

Emphasizing the need for communication with admin, Wang said, “I think that this just really demonstrates [that] admin needs to be talking to students because we heard from other Student Government members that when admin heard about the pushback from undergraduates, they were surprised that we had all these objections.”

Wang continued, “One of the things on our platform was having an academic affairs committee who would be on the front line of talking to admin about these issues and making sure that students are getting their input.” Such a committee would be structured similarly to other SG committees, consisting of individuals involved in SG and other undergraduates.

The Thrive slate is also concerned with making campus more accessible for students in a variety of ways. For instance, it will seek to collaborate with Student Disability Services (SDS) to continue the use of Zoom even after in-person classes resume, similar to the existing notetaker accommodation.

“Being able to participate and not having to worry about [missing class due to doctor’s appointments] and just focusing on your own well-being—I think that's just so critical,” Wang said.

Wang also spoke of how existing resources for students with disabilities are difficult to access, such as those to receive accommodations for ADHD. “The website is just very hard to navigate [and] the process is very complicated…. That immediately is not accessible.”

Thrive is also hoping to expand the hours of Student Counseling Services (SCS). “Right now, I'm looking into whether it's possible to expand SCS’s hours so that people can make appointments for the evening or weekend,” Wang said. She noted that it was important to keep in mind SCS and admin’s “concerns about cost and [make] sure that clinicians aren't burning out.”

Uplifting marginalized students is central to Thrive’s platform, according to its three members. They hope to establish an SAO that can address some of those goals.

“[The Student Advocacy Office] is a group made by students, for students, consisting of students from all over the University who identify as survivors, FGLI students, students who have taken leaves of absences, to help other students navigate Title IX, navigate leave of absence policy, [and] navigate advising when you're an FGLI student so that students will feel heard and represented by people who have similar experiences to them,” DePompei said.

Both DePompei and Kumar emphasized that the positions in SAO would be paid.

“Wanting this position to be paid is very much influenced by our conversation with the Odyssey Scholars fellows board [Odyssey Scholars Community Fellows], where they talked about how difficult it was to find on-campus jobs,” Kumar said. “And I think if this is one thing that we can help with, we’d love to do that, especially for marginalized groups on campus, to make sure that they have support and [that they] are compensated for that support.”

“We can’t possibly represent every single student’s individual identities, but we can listen, we can learn. And we have learned so much from the conversations that we've had this week and that we hope to continue to have…to better advocate for these students,” Kumar said.

As a whole, DePompei said that “we as a slate [were] pretty satisfied up until a couple of weeks ago with how COVID measures have taken place on campus purely in terms of limiting spread, which is the most important thing [for] student health.”

“But, with the recent outbreak that was largely driven by off-campus fraternity parties and traveling after [during] spring break, we think our platform for our idea for Greek life recognition is probably the most salient issue in terms of the COVID outbreak,” DePompei continued.

The initial outbreak resulted in over 60 cases of COVID-19, though that number has risen. To limit the spread, the University instituted an extended stay-at-home order for students in on-campus housing that began on April 7 and was lifted on April 20.

“Greek life recognition is something that has been a conversation for years, prompted by survivors in groups like PSA [Phoenix Survivors Alliance],” Kumar said. “I think that this year, we very much see the other harm that a lack of recognition can bring to campus, especially as they impact everyone with COVID violations and things like that.”

“The most important element of recognition is that with University oversight and communication with national chapters, there is greater oversight over the resources that frats are oftentimes able to use as a means to host parties, meaning their houses,” Kumar continued.

Kumar outlined how national chapters own the houses that frats are housed in, which means that “the University doesn't have oversight over [the houses] right now in terms of leasing.”

“Right now, a lot of the accountability measures are figured out by men in fraternities, and when you’re punishing your brother that you have pledged with, that you’ve rushed with, it doesn’t necessarily mean the safest space for accountability,” Kumar said.

“In the past, SGA [Student Government Assembly] has not really taken a stance toward GSU recognition as a body, I think because Graduate Council prefers to remain more neutral,” Wang said.

But if the recently proposed referendum to split Graduate Council from Undergraduate SG (USG) passes, that may no longer be the case for USG, which would then be operating separately from Graduate Council. “While we want to remain on good terms and have good communication with Grad Council, we also want to make sure that we take this opportunity to talk to GSU and really uplift the work that they're doing,” Wang said.

That uplifting would take on a few forms, according to Wang. “We want to bring up GSU recognition in meetings with admin,” Wang said. “Undergraduates benefit from grad labor. We all have grad students as TAs, [and] they can also be mentors. We owe it to them to advocate for them.”

On the University of Chicago Police Department (UCPD)

“We as a slate want to lift the curtain on what operations UCPD has and has not done,” Kumar said.

UCPD’s current jurisdiction stretches beyond campus limits, from East 37th Street to East 64th Street and from South Cottage Grove Avenue to South Lake Shore Drive. Kumar noted that the size of the patrol area means that community members unaffiliated with UChicago are also policed by UCPD. “Why does the University have such a large private police force when it clearly isn’t only students who are being policed, right?” Kumar asked.

Thrive hopes to redistribute some of the funding for UCPD towards students. “The work that [UCPD does] is oftentimes reactive as opposed to preventative. When harm occurs on campus in the form of a mugging or something like that, UCPD takes note of this, but students are oftentimes left on their own to pay for things like hospital bills…. We really want to push for transparency in the budget to be able to make the argument that these funds should then be distributed to support the student,” Kumar said.