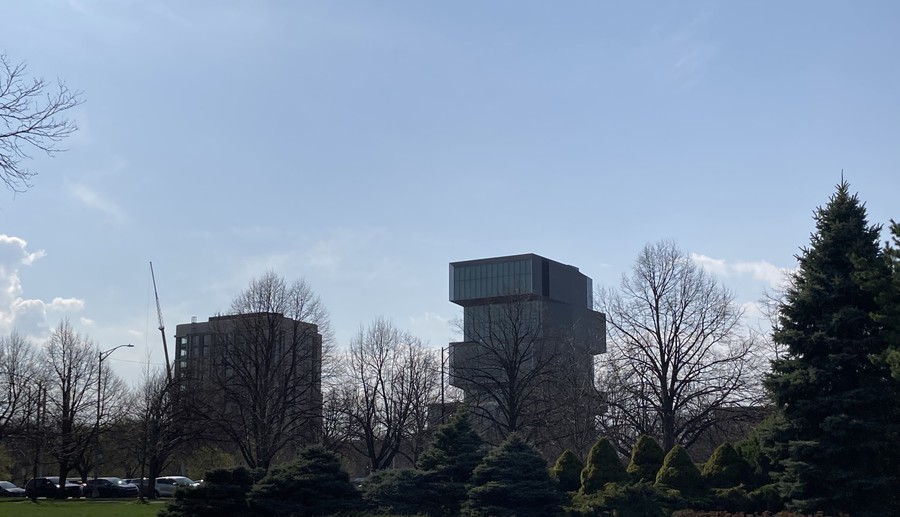 Looking across the Midway towards Woodlawn Residential Commons and the Rubenstein Forum.

On Thursday evening, College Council (CC) drafted a resolution that called on the University to bar students from reserving seats in courses via pre-registration if they are found to have seriously violated the University of Chicago Health Pact, such as by attending recent parties or other unmasked gatherings.

The resolution follows the University’s decision to pause in-person instruction and institute a stay-at-home order among students in on-campus housing after a large spike in cases of COVID-19 that administrators believe may be linked to fraternity parties. It also comes after an announcement CC made Thursday morning which argued that students who “egregiously violated the Health Pact,” such as by attending a party, should be sanctioned, possibly by imposing a pre-registration hold and halting housing lottery placement priority.

CC sought input from students on the resolution and provided a forum for students to comment on the role fraternities played in the recent uptick in COVID-19 cases at a Thursday night event titled “Greek Life & the Campus Closure.” There, students discussed the propriety of punitive measures against COVID restriction violators and Greek life recognition.

First year Evan Cholerton said that taking disciplinary action against individuals would not reduce partying among students. “It’s our instinct to punish,” he said. “But I worry that if we do that and focus all our energy on punishing, they’re still going to have those parties and they’re still going to be as dangerous.”

CC Representative Summer Long wrote in a comment to The Maroon that any punitive measures should also further efforts to address longer-standing problems surrounding fraternities. "I am 100% in favor of punitive measures, as long as they are also used in tandem with looking to recognize Greek Life," she wrote.

CC members met with Dean of Students Michelle Rasmussen and Assistant Vice President for Student Life Mike Hayes in February to discuss the possibility of a “soft recognition” of Greek life that could be used to justify University interventions. According to Alex Levi, Vice President for Administration of the SG Executive Slate, they were informed that the Board of Trustees would vote on the decision of whether to regulate UChicago’s fraternities.

“What we heard at the meeting confirmed our beliefs regarding actions that we can take: we need to advocate to the administration an urgent need to respond immediately to the present crisis, while also pushing forward on the more systemic issues pertaining to Greek Life,” CC Representative Allen Abbott said.

In addition to its punitive measures, CC’s resolution would commit CC to working with the RSO Students for Disability Justice in order to establish a Vaccination Accessibility Fund that could reimburse University community members for “any expenses incurred from traveling to and from a vaccination site that is within 500 miles of one’s current address.”

According to CC Representative Allen Abbott, CC will communicate with the University administration on the issue about Greek life on Friday. CC members also plan to discuss the resolution among themselves today.

College Council’s actions on Thursday followed the Wednesday night release of a rebuke of students who violated COVID protocol by attending parties. “We condemn the students who attended these parties, knowing full well the risks and dangers of doing so,” SG wrote in a statement issued on Wednesday, citing “multiple fraternity and other student parties that have occurred this year, particularly those hosted just this past weekend.”

Per University administrators, the recent uptick, which may be tied to gatherings at off-campus fraternities, is the largest cluster of cases on campus this academic year.