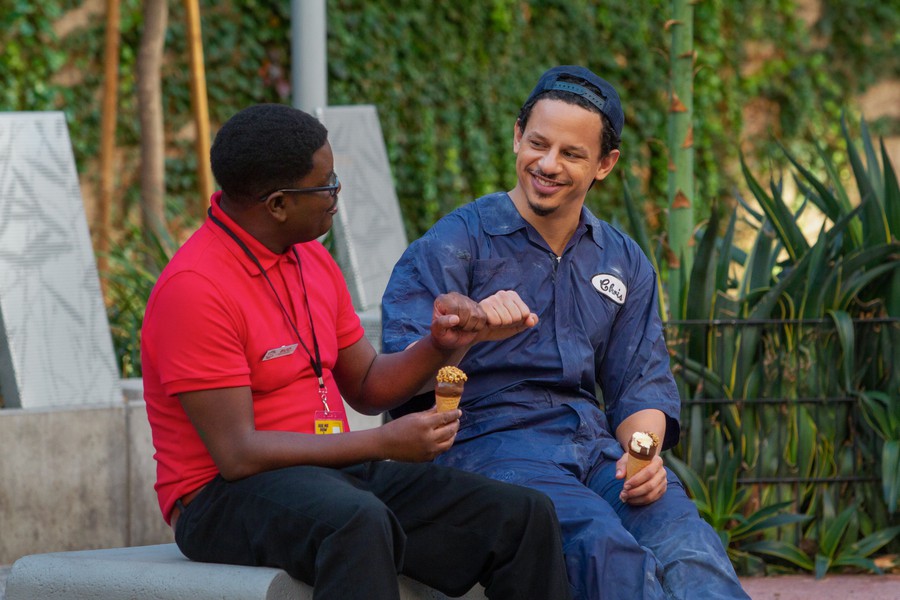 The Maroon sat down with Eric André, Lil Rel Howery, and Michaela Conlin to discuss their Netflix original movie Bad Trip. Also at the roundtable discussion were reporters from North Texas Daily, SMU Daily Campus, The Michigan Daily, The Eagle, The Hoya, and The Dartmouth.

This interview has been edited lightly for clarity.

North Texas Daily: Pulling off hidden camera pranks requires a lot of confidence and comfort. Was that something you had to practice or something that always came easy to you?

Eric André: It took a lot of practice. I’ve been doing these hidden camera pranks since I was like 20, so it took me a long time to feel comfortable doing them. I mean my organs used to sweat from nerves. [Lil Rel Howery as Bud Malone] and [Michaela Conlin as Maria Li] had to be thrown in the fire pit––like they went from zero to 100. The first day Rel filmed with us was the first hidden camera prank he ever did. It was the Chinese finger trap scene at the barber shop and the guy pulled out a knife on us, and he almost got murdered his first day. For Michaela’s audition, we literally dragged her to a mall and we were like, “Alright, this hidden camera prank stuff is way harder than just doing scripted stuff.” It’s really stressful and its got its own feel to it. So, we dragged poor Michaela to a mall for her final audition, and we had her yell and scream and slap around my director in a clothing store in front of a bunch of clerks just so she could feel what it felt like.

SMU Daily Campus: How did you guys balance the shock and the humor of all your performances with the consciousness that these are real people?

EA: I think there’s good bad taste and bad bad taste when you’re doing shock art. You want to be provocative, but morals are always changing, exponentially now in this digital age, and so you’ve always got to figure out what feels like you’re dancing on the edge in a good way and what feels unethical. Comedy’s a game of millimeters, so you’re always checking in with your barometer. But you know, there’s never malicious intent. We don’t go into any pranks looking to hurt somebody or emotionally scar anybody. At the end of the day, we’re trying to make everybody, not just the audience at home [but also] the people we’re pranking, laugh, and there’s no malicious intent. I think intent and context are the DNA of what makes a comedic event feel good.

Michaela Conlin: People were so nice, too. They were so kind.

EA: Yeah, people were genuinely trying to help us out. There’s this great scene where we go to apologize to Michaela for destroying her art gallery and she snaps on us. She breaks a broom over her knee and she’s like, “Get the fuck outta here!” And then all these cleaning women that we hired that didn’t know they were being filmed all came around.

MC: They smelled so good. They gave me such good hugs. They were so soft. This woman whispered in my ear, “It will be okay.” They were so sweet and lovely––complete strangers.

EA: That was the other thing too. Anytime it was [Tiffany Haddish as Trina Malone] yelling at me or Michaela yelling at me and Rel, the marks would always take the ladies’ side. Like Tiffany’s hanging me off a roof and the first thing out of one of the women’s mouths was, “What the hell did you do to her?” I was already guilty.

Unknown: How much of an issue was getting publicly recognized while you were doing all these, like, crazy stunts?

Lil Rel Howery: It wasn’t an issue at all. A couple of times, but I think Eric and everybody did a great job as far as picking the right marks. Eric says it all the time––you find 40-and-up moms who just had a long day, who ain’t got time to recognize nobody. Also, the pacing of everything, you know, us owning it and changing our looks. I mean, I literally wore stuff I would never wear. I had a moustache and this damn civil rights–attorney hair.

LRH: Because it was only a couple of times. And if they did recognize us, we had these code words and somebody would come in and escort that person out. I think Eric tells the story all the time [of] when we were doing the zoo prank. One of the ladies was like, “Hey, you know you look like Lil Rel Howery.” I’m like, “Hey I hear it all the time.” And we just kept it going.

EA: It threw her off the scent. She was like, “Hey, what’s going on with this gorilla?” Yeah, we just avoid the demographic. The majority of my demographic are like college students and skateboarders. We weren’t pranking them. We were pranking tired moms.

The Michigan Daily: So, I know one of the big things it took for this movie to get made was you had to spend a lot of time studying storytelling. I read you attended some Robert McKee seminars, so could you talk about that experience and what kind of story you wanted to tell with this?

EA: Yeah, I did. I never had to deal with narrative writing before for the Eric André show. It's just jokes. It’s prank-based. You just write the funniest joke and you don’t have to worry about any storytelling principles or rules. And it’s its own art form, storytelling. It’s very, very hard. I didn’t know what I was doing, and you need a story to get an audience across 90 minutes of footage or it just won’t work. The movie will stall out. So yeah, I just had to go back to school. I took Robert McKee classes and I had to read Save the Cat! and Syd Field’s book on story writing along with my writing partners, because we were just coming from a joke-writing place. We weren’t coming from a narrative story writing place. So yeah, we just had to educate ourselves.

The Eagle: How does the script change according to the type of content you get from people’s raw reactions? And was there anything that you were trying to get out of people and weren’t able to?

EA: Especially in the beginning, we had to constantly write and rewrite and rewrite. Then you go out, you film, some stuff works, some stuff fails, you watch it in the editing bay, then you gotta rewrite. We did it in waves. We did it in three or four different shooting blocks, where we’re editing in between and picking up what we needed. So you’re really in all four phases of production throughout. You’re in writing, preproduction, production and editing all throughout the movie, so it was constantly evolving and getting better and better.

The Hoya: What is the brainstorming process behind coming up with all these pranks?

EA: Me and my team, which is my director Kitao Sakurai and my writing partner Dan Curry, met up with Jeff Tremaine, who cocreated Jackass with Johnny Knoxville and Spike Jonze, and his producers. So, he had 20 years plus experience over us. We would all get our favorite comedians together in a room and start brainstorming ideas all day based on the story we came up with as a family. We brought in Nathan Fielder and some of his writers, we brought in Sacha Baron Cohen and a couple of his writers, we brought in some people from Punk’d. We brought in the greatest prank minds who know the game to come up with the scene ideas and the pranks and story ideas. And it was a long and winding road. It didn’t happen overnight.

Unknown: I want to know what each of your favorite pranks was, whether it was the prank that was the most fun or the most interesting to you?

LRH: Mine didn’t make it to the movie. I think we’re gonna release it. But it was the exorcism. Eric’s character Chris was possessed by the devil and we had this hotel room with blood leaking and him rising up, and we had this priest come in to help me get the demon out of him. And this priest is really serious. So it got really crazy. I kept cursing every time he’s giving me the Bible scriptures to say. He’s like, “No, you can’t say it with the curse words.” I’m like, “Get the fuck out [of] my friend.” It was insane. But the crazy thing is the guy really thought he was doing it. I think they had to track him down cause he just left and was cocky about it. Like, “I just saved a life.” That one, which I think we’re gonna release at some point, is insane.

MC: Wow, can my story have a priest in it too? I feel like making out with a priest, even though he wasn’t a priest, was sort of cool. I mean when do you ever get to do that? He fully looked like a priest and was a really good actor, so the whole thing was kinda cool but also really wrong.

The Maroon: So how did you decide which pranks stayed in the final cut and which ones are going to be released later?

EA: That goes back to story. Whatever fit into the most state-of-the-art, efficient version of the story is what stayed, so even really funny pranks that were great on their own [were cut] if they didn’t really mesh with the story, like the exorcism prank Rel was talking about. It was just too surreal and made the movie like a horror movie. It didn’t play with the rest of the rules for the other scenes. So that one scene, even though it’s super funny, kind of jeopardizes the stakes and the reality and the story between these two friends, and you want the story to have heart and feel real and be real and you want to actually connect with these characters and not have it feel too goofy. Because you have to be emotionally invested with these characters to get to the end of their journey and see where it goes. But the good thing about YouTube and letting a lot of these other pranks that didn’t make it in the movie live online is that we can share all this stuff. We can share the exorcism prank, we [can share] a prank with Chris Rock that kind of failed because the prank just didn’t work. We have a bunch of stuff. We have a prank where Rel’s driving around in a golf cart in the mall and he’s bashing into mannequins and garbage cans and these women on the back are like, “Aaaaaaah.” That’s kind of the beauty of this movie versus [a traditional scripted comedy] where the outtakes just never see the light of day. This is a little bit different where the pranks are funny on their own so they can also just exist online.