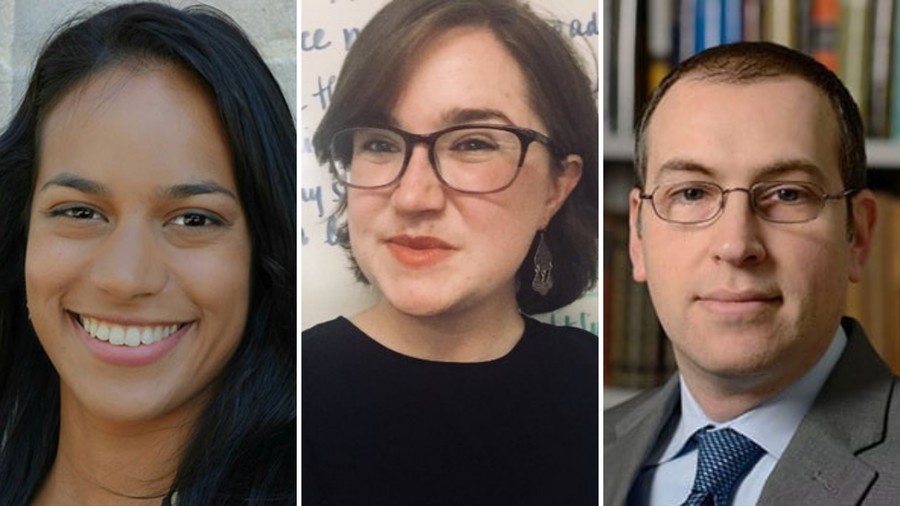 This fall, the University’s Department of History will be adding three new faculty members, all tenured or tenure-track, to their ranks: Mary Hicks, Kenneth Moss, and Emily Kern. Each new professor spoke with The Maroon their current work, their visions for their respective concentrations, and what they will bring to the University.

Hicks is currently an assistant professor of Black studies and history at Amherst College, specializing in the history of the South Atlantic slave trade. As an undergraduate at the University of Iowa, Hicks realized she preferred engaging in historical research to legal work and decided to pursue a career as an academic.

As a graduate student at the University of Virginia, Hicks traveled to Latin America several times to study enslaved mariners and African women in colonial Brazil during the early modern and modern eras. While she had to abandon her initial plan to write a dissertation about Black women in the South Atlantic, she has recently returned to the topic in a forthcoming manuscript entitled Ritual Bodies: Gender, Race and Power in the Early Modern South Atlantic.

“I am really interested in how capitalism changes societies, changes cultures,” Hicks said. “The next step is going back to that original project about Black women in the South Atlantic world between Brazil and West Africa and looking at […] ‘How did they experience capitalism?’”

At the moment, Hicks is finishing up her latest book manuscript, entitled Captive Cosmopolitans: Black Mariners and the World of South Atlantic Slavery 1721–1835. It concerns the maritime labor of African-born enslaved seamen during the transition from the early modern world to the modern world.

“I myself like to jump around intellectually, to think trans-regionally. I like to think across time periods that people might think of as distinct, like across medieval and early modern and modern,” Hicks said.

Moss is currently the Felix Posen Professor of Modern Jewish History at Johns Hopkins University, specializing in modern Jewish history, specifically in Israel and Eastern Europe. He recently finished a book on Jewish political thought in Poland during the tumult of the 1920s and 1930s and has begun to shift his focus to the post–World War II Jewish world. He will be teaching a course in the Jewish Civilization sequence next winter quarter.

Moss has never felt pigeonholed by his job as an academic historian, drawing on a wide variety of texts. “With my own work, sometimes I turn to literary theory, and sometimes to classics of social thought, and sometimes […] to contemporary sociology,” he said. “Those things to me have all been essential for what I want to do, and only incidentally, at some points, have I felt myself being a historian. I’ve never found my best work to be driven by some notion of what it is [that] a historian is supposed to do as distinct from [what] other sorts of folks [do].”

Moss was interested in pursuing an academic career as early as high school, an aspiration he confirmed upon graduating from Rutgers University in 1996 with a B.A. in history. He went on to earn his Ph.D. in Jewish history at Stanford University in 2003 and then left for Johns Hopkins, where he served as the director of the Leonard and Helen R. Stulman Jewish Studies Program and as a professor of Jewish history. He has studied and written about many subjects related to Jewish history, including Zionism, Yiddish and Hebrew literary culture, and Eastern European Jewish thought and society.

When asked what she wanted people to know about her field and what misconceptions were common about it, Kern had much to say about the nature of scientific progress itself.

“Science is about making sense of the physical and natural universe, but it’s also a social activity, performed by people, freighted with different kinds of cultural meanings, funded and supported by universities, charities, and governments, and used to make policy, shape national narratives, build international or global communities or personal identities, and create literature and art.”

Kern continued to talk about her field, “[The] history of science lets us ask questions about how scientific knowledge has come to have the status and authority it has in the world today, but also about how to make sense of these frictions and tensions between power, culture, and observed reality.”

At UChicago, she is excited to design her own courses about various topics related to the history of earth sciences. One course she wants to teach would be about the history of nuclear physics and research—a history, she noted, in which UChicago has played a key role. Starting in fall quarter, Kern will be teaching graduate and undergraduate classes in the history of science as well as the Self, Culture, and Society sequence in the social sciences Core.

These three incoming faculty members will be teaching in the coming fall quarter, which the University currently plans to conduct in person.