"Jupiter’s Legacy" Raises a Million Questions, but It Doesn’t Seem To Have the Answers 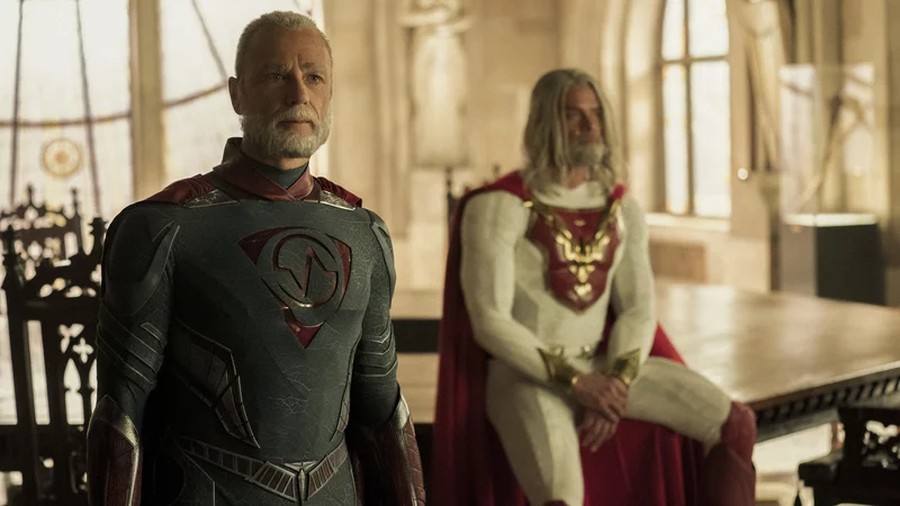 Based on the eponymous comic books by Mark Millar, Frank Quitely, and Peter Doherty, Jupiter’s Legacy is a gritty superhero drama that cast members are quick to describe as “human.” The show, directed by Steven S. DeKnight, jumps between the lives of a number of superheroes (and other individuals with superpowers, whether or not they use them for good). It focuses largely on the Superman-like character of The Utopian, and his family, serving as an MCU (Marvel Cinematic Universe) of sorts for mature audiences.

This aged-up superhero story is something we’ve seen before. Both the Watchmen movie and television series, alongside The Boys, fill similar spaces, and I’d be lying if I said that Jupiter’s Legacy was more attention-grabbing than other similar shows. In the five episodes I was able to preview, the show felt like it was grappling with too much: it’s family drama, but it’s the ethics of policing, but it’s superheroes, but it’s a half-hearted critique of capitalism. At the same time, it jumps between the late 1920s and the modern day while simultaneously hopping across the country from one episode to the next. The show has so many interesting plots and characters, but it’s difficult to feel strongly connected to any of them because at any given time, it feels like six different storylines are occurring simultaneously. This is even more overwhelming because viewers are being introduced to an entirely new universe. While shows like WandaVision can get away with assuming that audiences already know a good bit about the Marvel universe, Jupiter’s Legacy is stuck with the arduous, though exciting, task of creating something from scratch.

Perhaps the most important thing about the world of Jupiter’s Legacy—more important than knowing how powers came to be or remembering the names and roles of the laundry list of characters that appear in any given episode—is that The Utopian leads a collective of heroes called The Union, who operate strictly under The Code. Created by The Utopian, The Code requires that all members of The Union follow certain rules, including not becoming involved in politics (as it would be “the end of free will”) and, most importantly, never killing anyone. This rule is broken expeditiously by Brandon, son of The Utopian, in an out-of-nowhere full-scale fight scene featuring a slew of heroes, some of which are introduced only to be immediately killed. Presumably, if Brandon hadn’t killed Blackstar, the attacking creature, then Blackstar would have killed The Utopian, along with other heroes. This naturally leads to debate about The Code, with the public largely agreeing that Brandon’s actions were correct, despite his father’s unambiguous condemnation.

If you’ve ever seen the beginning of Sky High, then you already understand the relationship between Brandon (also known as Paragon) and his father Sheldon (The Utopian). Sheldon sees Brandon as a hero more than as a person and expects him to carry on the family legacy, eventually leading The Union himself. However, he doesn’t feel that Brandon is at all capable of handling this responsibility, and much of the actual parenting is left to his mother, Grace (Lady Liberty). Chloe, Brandon’s sister, rejects her father and The Union, as she thinks he is so caught up in being a symbol that he doesn’t know how to be a person. She’s right, of course, but she also serves as a symbol by way of a successful modeling career. Chloe’s storyline is one of the more interesting ones. She clearly cares about her family, but her struggle with addiction and the feeling that she’ll never be accepted by her father, along with her direct opposition to The Union, prevent any kind of resolution. She’s also involved with Hutch, the dashing bad-boy son of a supervillain who used to be The Utopian’s best friend. While some of this seems a little overdone (daughter of celebrity rebels and dates an edgy older man), it’s still entertaining and exciting, perhaps because Chloe and Hutch’s characters seem far more human than the other characters.

The combination of Chloe and Hutch is clearly anti-establishment, but again, it’s difficult to read the show’s social commentary. The opening sequence features men shadowed by American flags, and the heroes are distinctly American (Lady Liberty, for example), but there is so much explicit commentary on the crises in America at the same time. It does feel sometimes like the show is trying too hard to make a point without doing anything new—ultimately, we are watching a wealthy White nuclear family (descended from a steel baron, in fact) serve as the face of America. The second episode takes place prior to the existence of superheroes and at the beginning of the Great Depression. We’re shown a newspaper headline proclaiming the “Death of Capitalism” that informs Sheldon that his father, who died by suicide after the stock market crashed, wasn’t actually a magnanimous, kind-hearted steel baron and instead had lost the pensions of all his employees. Sheldon assumes the article is false and declares journalists “rotten little Marxists” before delivering a monologue about the importance of capitalism. Of course, later he learns that it was all true, and although it’s unclear if his political opinions have changed, he decides that superheroes ought not involve themselves in political domains. It almost seems like the show is trying to divorce the paragon (ha ha) of American values from any tangible reality, beyond some vague support for benevolence and goodwill.

Yet, The Utopian’s character is intentionally flawed. He’s not a great parent, but he also can’t seem to remember the non-superhero names of his teammates, whom he considers family. Chloe is quick to point out that this is unacceptable, but The Utopian takes all of her opinions with a grain of salt. (This is understandable, as she’s been known to throw men through walls or cars at people she doesn’t like). Still, I have trouble understanding what the show is trying to say. It explicitly (and not particularly tactfully) speaks about police brutality, showing a moment where an officer commiserates with Paragon about the loss of life before claiming that they “oughta shoot all the bad guys.” Paragon is paralleled with police, specifically murderous police, but at the same time is painted as someone we ought to sympathize with, at least in the beginning of the series. I understand that the show is attempting to offer a nuanced perspective on the gamut of “American” issues, talking about sexism and racism in the 1920s, class distinctions, police brutality, the death penalty, and a number of other issues. But it seems like it’s biting off way more than it can chew, leaving us to try to figure out a moral that they obviously want us to grasp but that feels just out of reach.

So there’s a lot going on. On top of that, the show is interspersed with Sheldon’s 1920s hallucinations, which will eventually lead him to somehow acquire powers. This bit of mystery is interesting, but it’s yet another element to juggle. Still, Sheldon’s ’20s mania is useful as a tool for introducing George, later known as Skyfox, the ex-best-friend-turned-bad-guy and Hutch’s father. I was particularly invested in this storyline; George is fun to watch and at the same time, it’s hinted at throughout the show that the acquisition of powers was a painful experience and possibly an accident. I imagine that near the final episode, the “how” will be revealed, and I expect it will be exciting and likely politically charged.

Ultimately, Jupiter’s Legacy is doing the most. It scratches the superhero itch and I have no doubt that it’ll do well, because everyone loves watching people in capes try to save the world while barely getting by in their own home lives. But Jupiter’s Legacy occasionally feels preachy or propaganda-esque, as if the writers knew they needed to say something, but they weren’t sure what it was. Some of its tropes are cliched, and I often felt like my hands were full trying to manage the names of the characters, let alone the plots. With that said, I do believe the show has potential. The world the creators have built is interesting, and Hutch and his band of misfit, anti-establishment people with powers (who don’t receive much screen time at all) felt ambiguous and interesting and fresh. I do want to finish the series, and I’m curious to see if the final few episodes clear up my questions about what I’m supposed to be focusing on, if anything, and exactly what the creators are trying to say. The show does a great job steering clear of painting morality in a black and white fashion, though it sometimes does so in a stagey manner. Still, what superhero world isn’t a little bit morally charged? Jupiter’s Legacy has spent the first half of their first season raising question after question and I’m excited to see which ones, if any, they begin to answer. I have a feeling that the quality of the last few episodes will make or break the show.