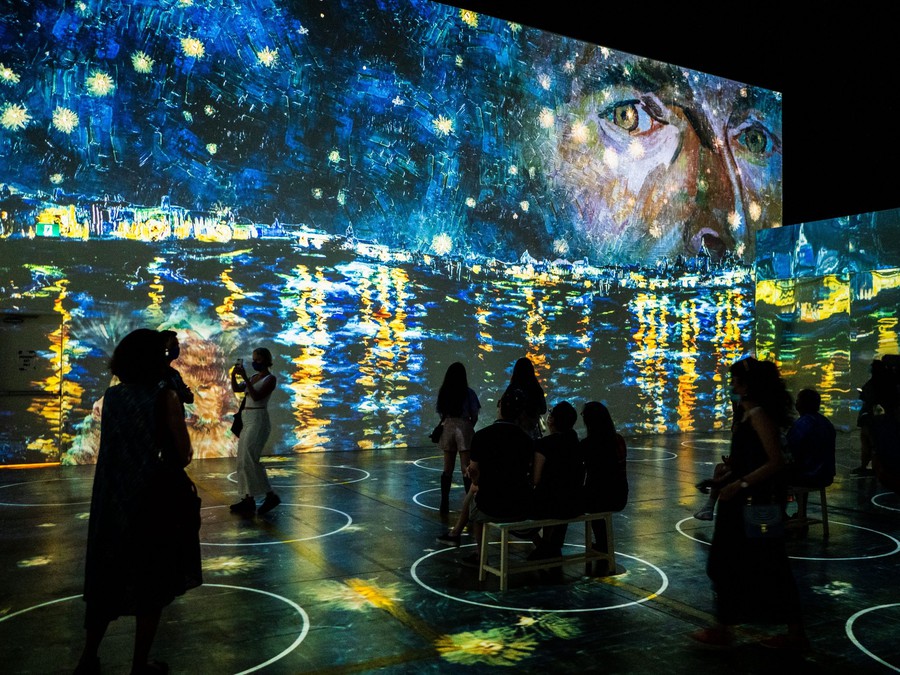 Audiences experience Vincent van Gogh's work from within the art in the Immersive van Gogh Exhibit.

Imagine stepping into a painting. The barrier of the textured canvas falls away and individual brushstrokes yield to your presence before reforming into the painting that now surrounds you. You’re suddenly met with not only colors and shapes, but also sounds and light that transform the space around you. No longer is this experience a simple dialogue between your eyes and the painting in front of you; instead, you are having a sensory conversation with the art. Such is the feeling of entering and experiencing Chicago’s new Immersive van Gogh Exhibit.

Created primarily by Italian artist Massimiliano Siccardi with an accompanying soundtrack by Italian composer and pianist Luca Longobardi, this exhibit is located in Old Town inside the Germania Club Building, a space specifically designed to fit this piece. The setup of the space itself is quite simple—within each of the three conjoined rooms, illuminated circles identify spots where viewers can sit, alongside triangular mirrors that reflect both the exhibit’s animations and the viewers themselves.

This minimalist arrangement, of course, comes to life with the art. In an animation lasting around thirty minutes long, viewers are exposed to the variety and depth of Vincent van Gogh’s extensive artistic repertoire. From The Potato Eaters (1885) to Almond Blossoms (1890), van Gogh’s works are not presented as one would expect—neither one by one nor even chronologically—but instead transition from one to the other accompanied by a myriad of songs and sounds specifically chosen to enhance each work.

The paintings not only surround viewers but also fill them with the spirit of van Gogh’s work. In one moment, giant, golden sunflowers splay across the Germania Club’s high walls to a sound that reminds one of buzzing bees, evoking the feeling of a hot summer’s day and the honeyed sweetness of the flowers themselves. The objects within each painting are animated as well. At one point, the sun pictured in The Sower cascades across the wall to the voice of Edith Piaf boldly singing, “Non, je ne regrette rien” (“No, I regret nothing”).  In another instance, a chilling, slowed techno piece presents Café Terrace at Night, which slowly rises from the ground.

The exhibit is more than a typical means of displaying van Gogh’s work—it showcases how technology and sound can influence the ways that audiences perceive art. The variety of music and quick transitions between animated pieces is a departure from how audiences would traditionally view van Gogh’s paintings in a museum, for example. This new style mirrors the fast-paced stimulation produced by technology in a way that perhaps is more appealing to modern audiences. In addition, visitors are allowed to photograph and record the exhibit during the viewing. Even so, because it is such a fast-paced, awe-inspiring piece, this exhibit is best viewed multiple times and initially without the use of phones to fully appreciate the artwork in its full glory as it is being displayed.

This Immersive van Gogh Exhibit is not one to be missed. For those who know his work well, as well as those who have never seen it before, this exhibit reframes van Gogh’s work in a way that takes one out of reality and into the art itself. As van Gogh himself said, “I dream my painting, and I paint my dream.”

The Immersive Van Gogh Exhibit will be in Chicago until the end of November, and tickets can be purchased at https://www.vangoghchicago.com/buy-tickets/#/.