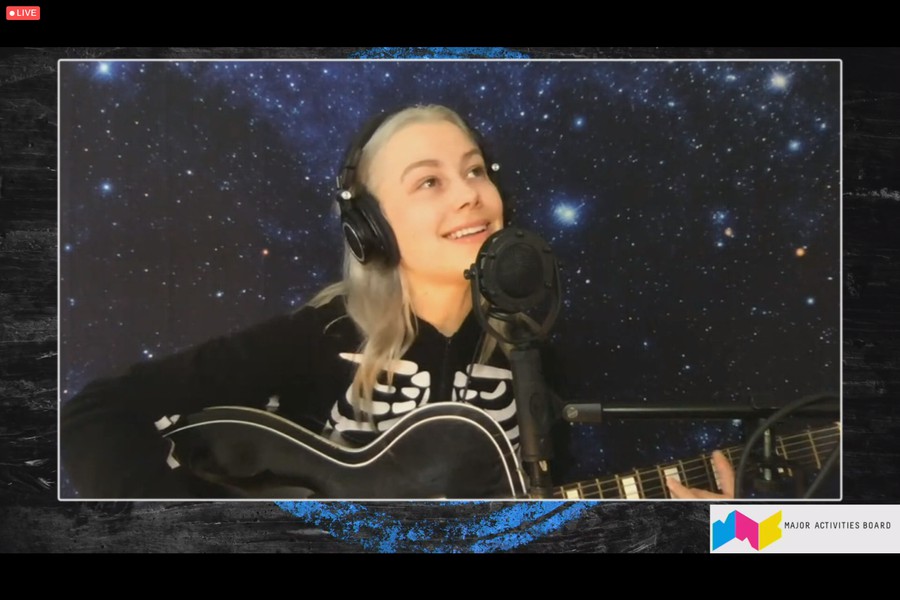 It’s been quite the year for virtual spaces. Once the purview of staid work meetings, video has now become a space that can encompass everything from meetings to movie viewing to even concerts. These virtual concerts can be at once disconnected and intimate. You lose the key intimacy of an in-person concert—of being in the same space as the artist—but you gain a certain focus; you can pretend that they’re singing just for you. After a one-year absence due to COVID-19, UChicago’s Summer Breeze Festival returns in this strange virtual space, with newly christened indie superstar Phoebe Bridgers headlining the first of three concerts.

2020 was a breakout year for Bridgers. Her most recent album Punisher, released in June, received widespread critical acclaim, landing highly on numerous critics’ year-end lists. With the success of Punisher, Bridgers became a “lockdown rockstar,” gaining mainstream success mostly from the confines of her home. Bridgers has since delivered a variety of unique virtual performances, including a concert from a green-screened oval office in her home to a rendition of “Kyoto” from her bed.

Bridgers brought this kind of close intimacy to her performance at Summer Breeze. There was no accompanying band, only Bridgers singing and playing guitar through a set of eight songs. In the first half of her set, she played four songs from Punisher, “Garden Song,” “Kyoto,” “Moon Song,” and “Chinese Satellite,” while offering brief—and cheeky—introductions to each song. She described “Chinese Satellite” as a song about both jogging and not believing in God, “Moon Song” as a cautionary tale with a warning not to date “indie boys,” and “Kyoto” as a song about her dad, who was not distant as many listeners think, but was instead “super clingy.” Bridgers’s sparse performance only accentuated the emotional nature of these songs. For example, the album version of “Kyoto” features dense instrumentation, drums, and multi-tracked vocals. In Bridgers’s performance, however, the joy and upbeat nature of that version was gone, leaving in its place the lyrics’ rather dark tale of a troubled familial relationship.

Between performances, Bridgers interacted with enthusiastic viewers in virtual chat which was filled with people describing themselves as “Pharbz” (a name for Bridgers’s fans), complimenting Bridgers’s chair, typing out all-caps lyrics to “sing along,” and offering numerous performance requests. Bridgers encouraged viewers to interact—stating that the chat made her feel less like she was singing into the void—and talked with viewers about her dog and her music. The chat highlighted the paradoxically intimate nature of a virtual performance: even though Bridgers and the viewers weren’t in the same room, by posting in the chat one could feel like they were interacting with her—that she was seeing their personal reactions in a way that an in-person concert might not allow. Instead of indistinct audience cheers in response to every song, the concert featured an interplay between Bridgers and the chat, making it feel more like a conversation than the purely spectator nature of a traditional concert.

Bridgers continued the concert with two songs, “Funeral” and “Motion Sickness” from Stranger in the Alps, and “Me & My Dog,” a song from her EP with fellow artists Lucy Dacus and Julien Baker. She ended with the final song from Punisher, “I Know the End.” On the album, the song builds from a quiet, moody rumination on a breakup to an explosion of sound that documents a real-life apocalypse as Bridgers screams over the end. In her performance at Summer Breeze, the song did not build and explode like the album version. Instead, the apocalypse section was not triumphant and frenzied, but rather quiet and subdued. Perhaps it resembled our past year in a way, a disaster that has been defined not by frenzied panic, but by slow, languid days that bleed into each other, with no outlet but the hope for an end.

Bridgers’s performance at Summer Breeze highlights why 2020 was such a good year for the artist. Her detailed, often claustrophobic, and depressing songs gel well with the similarly cramped and stressed existence of the past year. Her music can work both as a salve, in its calmness, as well as a voice that brings your pain to the surface. Despite its remoteness, Bridgers’s performance managed to highlight the intimacy that virtual concerts can bring, providing a unique experience to her fans at UChicago, even if we might still yearn for the return of the real thing.