In Season 4 of "The Handmaid’s Tale", Resistance Needs to Be More than One Person 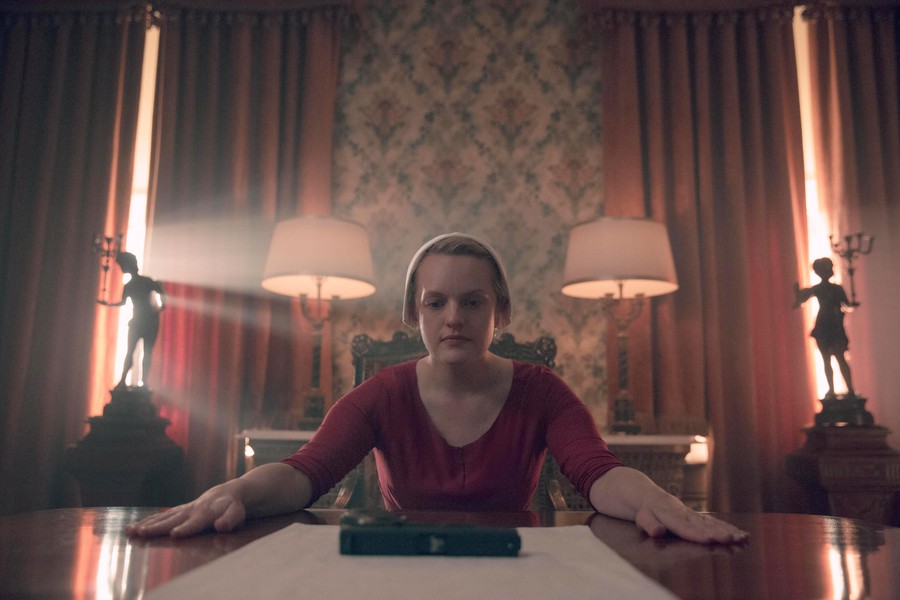 This article contains spoilers for up to season four of The Handmaid’s Tale.

The third episode of The Handmaid’s Tale’s fourth season, “The Crossing,” depicts the main character June being repeatedly and graphically tortured. She is waterboarded, almost has her fingernails ripped out, watches her friends die in front of her, and has her daughter’s life threatened. This might sound like a particularly graphic episode of TV, which it definitely is, but to a regular viewer of Handmaid’s, it’s almost banal.

“The Crossing” is the third of five episodes of Handmaid’s fourth season that have been released so far. It is also entirely irrelevant to the actual plot of the season, which focuses on June’s attempts to escape Gilead, a progression that many viewers, including myself, have been desperately awaiting. In a show that is so relentlessly bleak, the possibility of real escape is a hopeful direction. But the needless insertion of “The Crossing” recalls one of the most common criticisms directed towards The Handmaid’s Tale: that it is torture porn, even as the show might finally be heading towards escape.

Of course, the counterargument to this criticism is that Handmaid’s is depicting “real” suffering to make viewers “confront” the terrible oppression that is visited upon women in its world. That is all well and good, but nobody is claiming that Handmaid’s should become all sunshine and rainbows. Rather, the issue lies in how the show handles the violence of its world. More often than not, as in “The Crossing,” the show only turns a camera onto suffering without saying anything about it, as if suffering is inherently meaningful. And, just like “The Crossing,” much of the show’s violence is completely unnecessary in moving the story forward. Sometimes it feels like Handmaid’s thinks we’ll forget how terrible Gilead is if they don’t constantly remind us of it. June’s escape at the beginning of Season 4 is her fourth escape attempt. What is the point of having her fail so many times just to go back and be tortured again? It doesn’t teach us anything about these characters or the world, that we don’t already know, and feels superfluous to the point of becoming set dressing, normalized in a way that makes one desensitized to violence that should be shocking and horrifying.

This tendency of Handmaid’s to focus on suffering is made all the more frustrating by the interesting stories it could be telling instead. In the season’s second episode, “Nightshade,” Gilead escapee Rita, who was originally a Martha (or domestic servant), struggles with her new life in Canada against the ramifications of the trauma she suffered in Gilead. Even though it's only a side story, it’s one of the best, most memorable parts of the fourth season so far because of its hopefulness and focus on a singular experience. It’s about a character we know, who has suffered, and asks how one can create a life for themselves after having been through so much. This story, though less graphic and dramatic, is just as valid as the slow-motion grimaces of June because it deals with the long-term effects of suffering both on oneself and others. Rita isn’t the only character in Canada whose recovery could be explored. There are Moira and Emily, who were handmaids in Gilead, as well as Luke, June’s husband, who is dealing with her absence. The little we do see of their life in Canada is tantalizing, but many of these characters are lucky to even get a few lines an episode in Season 4, if at all. Handmaid’s is always at its best in these small character moments; they’re more grounded than the dramatics of resistance and suffering in Gilead. But Season 4 isn’t as invested in these narratives as it should be.

Instead, the show remains mired in the endless drama, slow-motion close-ups, red capes, and suffering of Gilead. From the show’s perspective, Gilead is where the #resistance is. We know this because June chooses to stay in Gilead to “fight,” as if it is impossible to resist somewhere else. June’s choice could be a metaphor for the show: when offered the chance to move to greener and more interesting pastures, it instead chooses to continue a fruitless struggle that leads nowhere. Handmaid’s wants to be a show about resistance. It wants to explore questions around how one might resist a state like Gilead, and what the best ways to do so might be. However, it consistently fails at answering any of these questions because it is so hyper-fixated on June, that instead of asking interesting questions on the mechanics of resistance, it perpetually asks you to consider if you still like June.

The show is deeply invested, perhaps too invested, in the mythology of June as the messiah/leader/iconic figure of Gilead’s resistance movement. For example, at the end of Season 3, June successfully smuggled over 80 kids from Gilead onto a plane to Canada. It wasn’t just June though, it was actually the entire “Mayday” resistance movement, including many other Handmaids and Marthas—but watching Season 4, it doesn’t seem like it. This is only one of several examples that illustrate how the show boils an entire organization of people across Gilead down to “June,” who oscillates between being more effective than the Mayday resistance and being far too reckless to be a “good” rebel. The never-ending moral dilemma around June’s effectiveness as a rebel leader got exhausting back in Season 3, but Season 4 continues to hash it out by having the same conversation every episode. My take: June is unintentionally a terrible leader, and given how little we see of other rebels, it's hard to know how she stacks up.

And therein lies the problem: Handmaid’s refuses to show the other people that compromise the resistance movement in Gilead, instead acting like June is the resistance. But resistance is so much more than one person. It’s an organization of many people across a society linking up, haphazardly or not, to fight back and attempt to gain power. Maybe there are leaders or symbolic figures, but focusing on them misses the point: that resistances fail without the broader structure and group of people that animate them. If Handmaid’s really wants to talk about resistance, it also needs to tell those stories. The stories of the Marthas who pass notes at the butcher’s, of the regular people in Gilead who help smuggle Handmaid’s out, of the militias in Chicago, of the diplomats in Canada working to rescue people, maybe even the story of an uninvolved Gilead citizen, who doesn’t want to put themselves at more risk than they already are. Right now, these people only exist in the periphery of Handmaid’s, appearing here or there to help June on her way. But these people aren’t really the periphery—they’re the heart that powers the resistance, and without them, Handmaid’s will never be able to say anything about it. Handmaid’s thinks it's a very big story, but it's still very small and focused on an incredibly limited group of people. It just doesn’t know this anymore.

Season 1 of the show, which is mostly based on its source material, Margaret Atwood’s novel of the same name, finds power in the singular perspective of its titular handmaid, portraying her individual view of the combined horror and banality of living in Gilead. It’s not trying to be a story about #resistance, it's a story of one woman’s experience living in a terrible world. Although it also contained many of the things Handmaid’s is now criticized for—graphic violence, hokey music cuts, #girlboss moments—Season 1 maintained the quality of its source material and even expanded upon it. In one particularly memorable and original scene, Janine, one of June’s fellow Handmaids, stands on the side of a bridge, holding her baby, threatening to jump and kill both of them. June is tasked with talking her down, which she does by talking about how they can, one day, return to a normal life. Janine hands the baby back but jumps off the bridge anyway. It’s one of the defining moments of the first season, and it contains everything the show currently lacks. Here, the stakes are real, and the focus is incredibly personal. It’s about these characters in this situation and what they will do at this moment. Do we want Janine to jump? What about her baby? Is the life she would have in Gilead worth living? What should June do? The show’s ability to focus on the particular situation of these characters stands in contrast to recent seasons’ attempts to make every character’s experience universal. Here, there is no grand narrative of resistance or visible physical torture, only the impossible situation of these characters and their struggle to resist a situation they can’t escape.

The ending of episode five of Season 4 suggests that finally, after five failed attempts at escape, June might be getting out of Gilead. But the future of the show itself is harder to determine. Given Handmaid’s reliance on Gilead and narratives of suffering, it’s difficult to imagine a version of the show which focuses on Canada or characters other than June. However, this is a version of the show that I yearn for, a version of the show that is more hopeful and could really say something about this world and the people that inhabit it. To ask the big questions that Handmaid’s wants to ask, the show needs to think smaller, on the level of the individuals who comprise its world, instead of acting like one character can be the whole world.