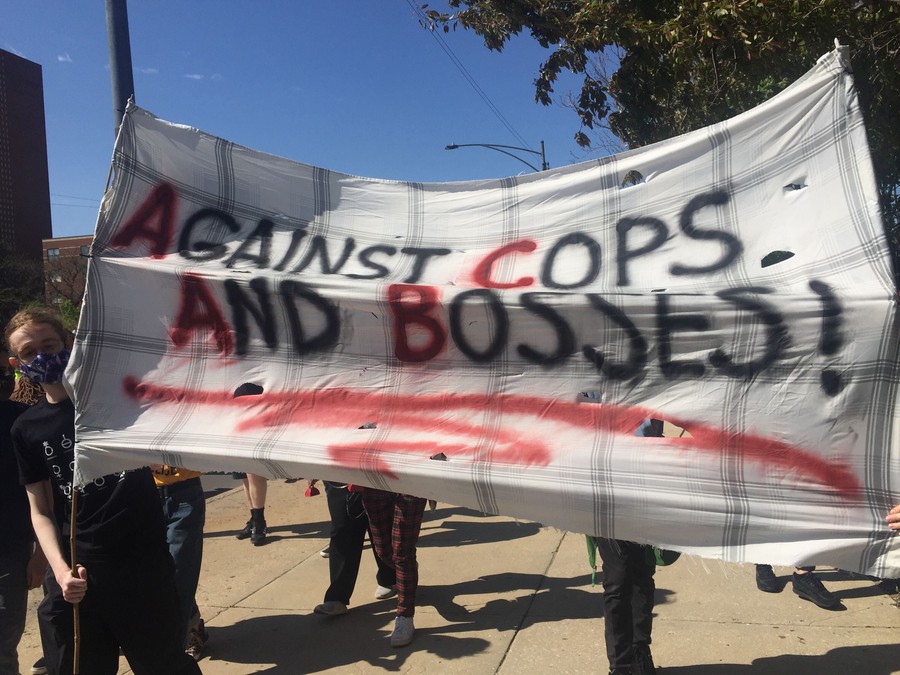 Activists held picket signs at the May Day march.

Organizers from a broad coalition of campus and community activist groups marched through campus on May 1, calling for the abolition of UCPD and recognition of the Graduate Student Union (GSU), among other demands. GSU, National Nurses United, Tenants United Hyde Park/Woodlawn, the UChicago Labor Council, and UChicago United were all represented at the march and in the accompanying car caravan.

The date of the march both commemorates the labor movement holiday May Day and kicks off a month of action by UChicago United, which is participating in a nationwide push by the campus activist organization Cops off Campus Coalition, demanding the abolition of campus police. UChicago United is a student organization that advocates for racial justice on campus and in the surrounding neighborhoods through direct action.

Speakers, such as Ph.D. student and UCLC organizer Esther Isaac, started off the event by outlining the connections between the police abolitionist movement and labor organizing. Participants marched from the Jewel-Osco parking lot to UCPD headquarters and Levi Hall, ending at the Experimental Station on 61st and Blackstone. Marchers held signs, including one that said, “Against Cops and Bosses,” and led chants such as, “We don’t want your wine and cheese, recognize your employees.”

At the site of last June’s occupation of UCPD headquarters on 61st Street, UChicago United organizer and second-year Warren Wagner spoke about the organization’s #CareNotCops campaign, underlining the campaign’s focus on the connection between University administration and its police force.

“At UChicago, we know there’s no separation between bosses and cops. We have the administration, the bosses, and they not only fund the cops, but they behave like cops,” Wagner said. “Second, we’ve got the cops, who we know are servants of the administration and the bosses. They exist to protect private property.” 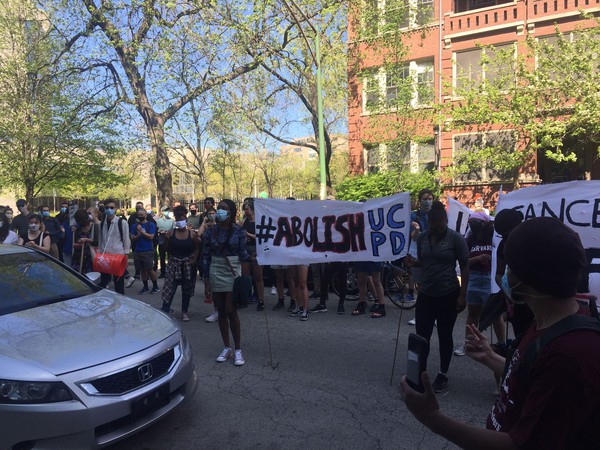 UChicago United’s #EthnicStudiesNow and #CommunityCentersNow (formerly #CulturalCentersNow) campaign organizers spoke in front of Levi Hall, advocating for the foundation of a fully funded Department of Ethnic Studies and community centers where students and local residents can build relationships with each other.

GSU organizer Stephen Cunniff also spoke at Levi Hall, discussing the union’s ongoing efforts to get a union contract, and their current demand that the University reduce the $1,200 Student Services Fee in order to alleviate financial stress on graduate students for the duration of the pandemic.

Branching out from the boundaries of campus, representatives of allied groups told the crowd about their own organizations’ work. A spokesperson for the nurses of UChicago’s Medical Center described their efforts to secure full sick pay for nurses infected with COVID-19, and to restore the University’s contributions to retirement benefits. Faye Porter, the president of the Mac Tenants United, condemned the local landlord giant’s rising rents as evidence of gentrification, and exhorted the crowd to act in “financial protest.”

“UCPD helps Mac Properties protect their investments,” Porter said. “I know because I live in a Mac property, that Mac Properties’ business model depends on creating the illusion of safety for richer whiter tenants to pay the crazy rents.”