UChicago Takes Reality TV? How Our Very Own Frat Bro Found His Fame 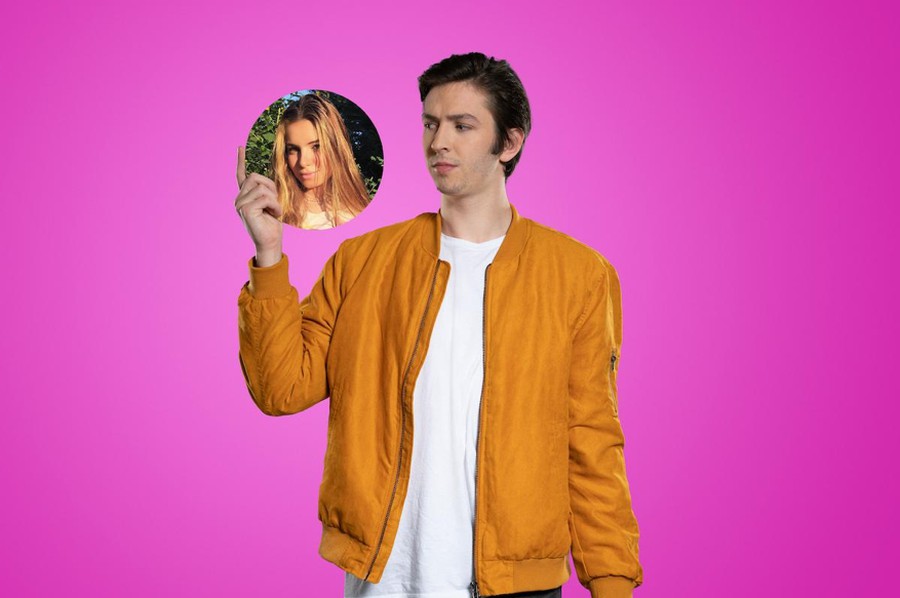 The producers decided that tall, fratty, ruthless Atkins would be funniest if catfishing as a five-foot-tall sorority girl.

Jack Atkins is a self-proclaimed die-hard Survivor fan. The cutthroat island-based competition show, now on its 41st season, paved the way for a whole host of competitive reality shows that Atkins has indulged in ever since becoming enamored with the genre at the beginning of high school. He’s applied to compete on Survivor more than once, to no avail.

And then, on the first day of 2020, a new reality series entered the game, one tragically well-suited to the socially distant year it rang in, though nobody—not even the all-knowing Netflix producers behind the project—could have known that at the time.

The Circle, a British import that first aired on the U.K.’s Channel 4 in 2018, made its American debut in 2020. Each Circle player gets an outrageously decorated apartment all to themselves and ostensibly doesn’t leave that building or interact face-to-face with anybody else for the entire two weeks of filming—unless, that is, they’re “blocked” before the final round. Billed as a social media competition with “real” and catfishing players alike vying for peak popularity and influence, The Circle is more strategy than sincerity. But then again, isn’t that just social media?

Atkins is a third-year in the College. When the first season of The Circle dropped, he liked it but didn’t love it. But, like most of the social media–addicted who have seen the show, Atkins thought he might be good at it, or at the very least, he’d have fun. “So I was like, Screw it,” Atkins told The Maroon. “I’ll go ahead and send in an application. What’s the worst that can happen? You just don’t get called back? And the best that can happen is that you win $100,000.”

A few months later, Atkins was called back. He had no strong preference for playing either as himself or a catfish, so he and the casting directors worked together to come up with a character that would give him the best shot at getting on the show for season two. “They wanted strategists this season,” Atkins explained. “I emphasized that I was going to be strategic; I would be cutthroat; I would do whatever it took to win.” This antagonistic angle is on full display in Atkins’s introductory montage at the start of season two. “I’m honestly down to go down as the biggest villain in Circle history. I don’t really care,” Jack tells the camera with a smile.

The producers decided that tall, fratty, ruthless Atkins would be funniest if catfishing as a five-foot-tall sorority girl—a “girl next door” type they decided to call Emily, though “Emily’s” photos actually depict real-life UChicago third-year Mariel Glass. Glass was paid for the rights to her photos, Atkins says, and has taken the whole thing in stride. She tells him that he played a girl better than she could have done.

To other players, Emily quickly came across as spineless, always playing it safe and trying to endear herself to others while shying away from making real enemies—or risky alliances. It was a strategy Atkins developed from all his years studying Survivor, and though he knows it got mixed reviews, he stands by his choice. But Emily’s ingratiating manner wasn’t what felled Atkins in the end. Rather, it was a makeup challenge led by celebrity guest Jonathan Van Ness that did him in. When fellow players saw Atkins’s poor attempt at giving a mannequin a makeover in half an hour, it was determined that he simply couldn’t be a sorority girl, and he was blocked from the game.

But unlike most other blocked players, Atkins, along with fellow player Lisa Delcampo, whose “Lance Bass” catfish character was blocked at the same time as Atkins-as-Emily, was given a second chance. Together, they were offered a premade catfishing profile (“John”) and lived out the rest of their time in the Circle in a shared apartment, planning to split their $100,000 check down the middle if they managed to win by some fluke of other finalists’ ranking strategies. (They did not.)

“I’ve seen a lot of discussion like, ‘Oh, Jack and Lisa are so different! [Their living together] doesn’t make any sense!’” Atkins said of the online reaction to their pairing. “And honestly, yeah, we are pretty different. But I feel like we’re both very down to earth. And so especially coming off like eight or nine days in the game when we were alone, and then the two-week quarantine before the game, seeing another person…we were just like, ‘Alright, let’s do this thing. We’re a team now. Let’s go.’”

Atkins, for better or worse, has mostly kept up with public conversation about him. “Even before the show, I would use Reddit to follow other shows that I liked. So it was kind of natural for me to go on there and see what fans were thinking,” he told The Maroon. Atkins got access to the edited episodes at the same time as the general Netflix-subscribed public, waiting until 2 a.m. in Chicago to watch them as they dropped in three-episode batches each week, at least before he moved to Los Angeles, where they’d drop at midnight Pacific Time. Every day since the episodes have finished airing, though, his care about public opinion has waned that much more. 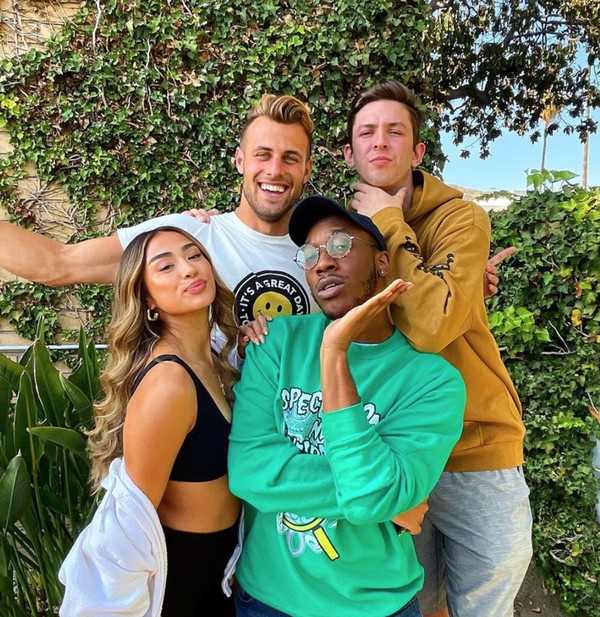 Still, public opinion has, in some sense, become Atkins’s job since leaving The Circle. “A year ago, I was like, ‘F— TikTok,’” Atkins laughs, careful to bleep out the operative word in real time. “I was like, ‘This shit’s so stupid!’” he added of the app, apparently no longer self-censoring. Now he’s got more than 175,000 followers on the platform and churns out regular content, often referencing his time on The Circle or featuring fellow alumni of both seasons of the show. He makes Cameo videos for paying fans and has brand deals requiring him to post. On Instagram, where Atkins boasts a coveted blue check and just over 125,000 followers, he’s recently promoted a relatively unknown social media app called “ibble.”

He may not have made $100,000 in two weeks, but Atkins is confident about the value of the industry connections he’s building in L.A. for the time being. The autumn quarter he took off from school to film The Circle (to his mother’s initial chagrin) and the summer he’s about to spend influencing out west are, in Atkins’s book, solid investments in his future.

A business economics major with a minor in astrophysics, Atkins laughs, “I really don’t know much about astrophysics. That’s my minor. [But] they were like, ‘We love that.’ So I was like, ‘Okay, I guess if you want me to sound smarter, I’ll just say that.’” Ultimately, Atkins hopes to go into talent management or to work at an agency.

There are pros and cons of Atkins’s heightened (virtual) campus profile in the wake of The Circle, but he reveals that not all of UChicago’s newfound attention on him has seemed particularly positive. I haven’t taken anybody’s temperature on campus, but if I had to make a wild guess, I’d say that much of the UChicago community likely sees Atkins as the stereotypical biz-econ-frat-bro persona that he radiates throughout much of the show.

In the eighth episode, though—the one in which he fails Van Ness’s makeup challenge and is subsequently ousted—this veneer momentarily gives way to vulnerability. Atkins seems determined to hide from the omnipresent tracking cameras as he chokes back tears over the knowledge that he’s done for, and as an audience member, the producers’ delight is almost palpable. “When I saw myself crying I was like, ‘Oh my God, people are gonna think I’m so lame,’” Atkins recounts. “And then a bunch of the feedback online was like, ‘Oh my God, when Jack cried like I really felt for him.’”

DeLeesa St. Agathe, who ultimately won the $100,000, was catfishing as well. An eminently likeable fan favorite, St. Agathe played the game as her real-life husband, Trevor, posing as a single father to the couple’s actual one-year-old baby. I asked Atkins how he felt upon seeing St. Agathe win.

“Obviously, I wish I had won, because I was still in it [as John] at that point. But you know, I thought DeLeesa played a great game, and I was obviously fine with a catfish winning,” Atkins said. “I also just think [that] of those finalists, DeLeesa was one of the most deserving from, like, a moral standpoint—which, I don’t care that much about the moral standpoint—but look, a mom who was pregnant at the time of winning the game, and who already has a child, who wants to better her family’s life…you can’t really complain about that story right there.”

And besides, Atkins points out, it’s just $100,000. Survivor winners make a million.