"That Was Just What You Did To Be a Cowboy": An Interview With Professional Bull Rider Eli Vastbinder

Vastbinder rode in Chicago this weekend in an event hosted by Professional Bull Riders, a prominent rodeo organization. 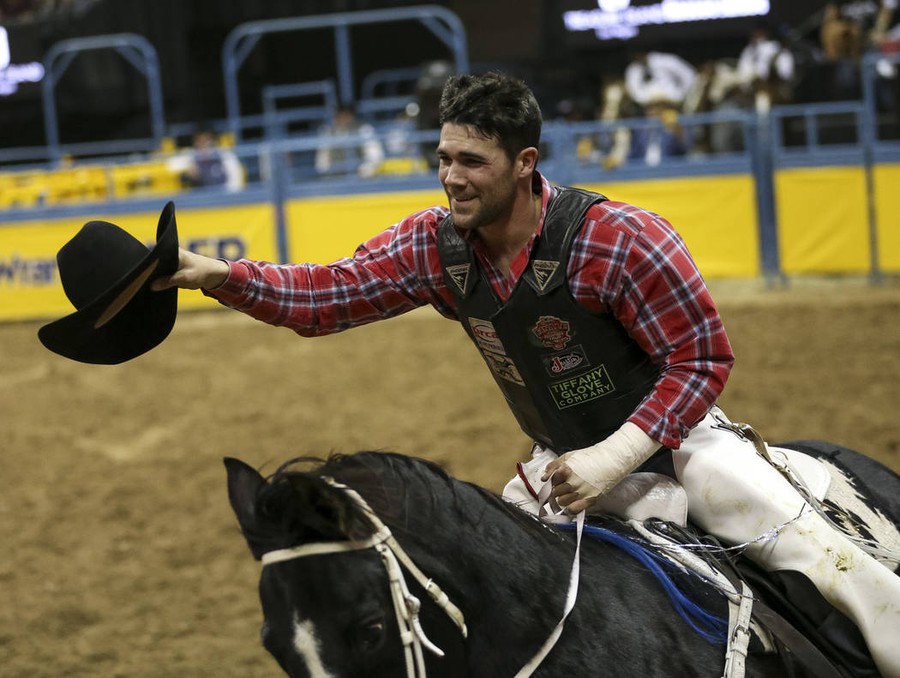 Vastbinder taking a victory lap (on a horse, not a bull) after winning a rodeo event in Las Vegas, 2018.

If one were to ask a Chicago sports fan if they knew anything about bulls, the answer would probably be “of course!” The fan might tell you that the Chicago Bulls are a team that won a plethora of basketball championships in the 1990s; they might add that the team is currently having another exciting season and are ranked first in their conference.

No, no, you would respond. Not the Bulls. Bulls.

The Chicago sports fan might then start looking at you funny.

This weekend, cowboys from all over the country flocked to Chicago for a bull-riding competition called Unleash the Beast. Unleash the Beast is hosted by Professional Bull Riders (PBR), an organization that has been putting on similar events since 1994. Official PBR competitions involve cowboys trying to ride their bull for eight frenetic seconds as it attempts to buck them off. Each round, the riders are allocated points by a team of four judges according to how well they ride. The bull is also given points based on how aggressive its effort is to throw the rider off. Both bull and man can earn up to 50 points, and the combined points make up the rider’s total score. Per the 2018 PBR Media Guide, pros are usually able to earn scores of 75 or more. Scores higher than 80 are a great result; anything above 90 is fantastic.

More than 600 cowboys are licensed to compete for PBR, including riders from Canada, Mexico, Brazil, Australia, and, the United States. The Maroon had a chance to speak to one such rider on Saturday, following the first round of Unleash the Beast. Eli Vastbinder has been steeped in rodeo culture since he was a child growing up in North Carolina. Speaking to him was the perfect way to learn more about the sport—the rules, the locker room culture, and the labor disputes that determine the future of the sport are all discussed. The following is a transcript from the interview. Some of the questions have been edited for conciseness and clarity.

Finn Hartnett: Where are you from exactly?

FH: Is that a small town?

FH: And how did you get into rodeo?

EV: Just grew up in a rodeo family…whether it was team roper, or bull rider, or rodeo producer, or something, everyone played a part in the rodeo at some point in time. So I just kind of grew up around it. I started out really young and have been in it ever since.

FH: How young would you say you were when you started out?

EV: Ah, shoot, I started out, y’know…I was probably still in diapers when I started out riding sheep. Then I went to calves, and steers, and junior bulls, and big bulls, and then on to a professional level.

FH: What was your first time being thrown off a bull like?

EV: Ah, shoot, I’ve been thrown off so many, they all just blend together at this point in time. Y’know, it was definitely one that…I remember the first big bull that I got on, and he did throw me off, but I was so hooked at that point in time, that, y’know, it didn’t matter.

FH: Why do you think you got so hooked on the sport? Do you think it was your family’s doing?

EV: Well, yeah, it was definitely something to do with the family, and just growing up and that. Y’know, my heroes have always kinda been cowboys, and that was just what you did to be a cowboy. And the money’s good, so that attracts me. And the winning and, y’know, the man against beast, and conquering it. There’s a lot of variables.

FH: I saw, while doing some research, that one of your rodeo heroes was [former World Champion Bull Rider] Gary Leffew—

EV: He kinda taught me how to ride when I was young, so I kinda looked up to him and his style of riding for a long time.

FH: And what would you say your style of riding is? Anything in particular?

EV: Not necessarily, it’s just little things…nothing that a normal person would ever really know about.

FH: Yeah, fair enough. But are there riders who kind of approach riding a bull differently than others?

EV: Yeah, everybody’s got their own thing that works for them, and that’s what it's all about, just finding the things that work for you, and sticking to them…I’m kind of a laid-back guy, I don’t really try to get too roused up, or over-analyze things very much, and then there are guys over here studying the rule books before [the event] starts. Y’know, studying film, and stuff. That’s not necessarily me.

FH: That’s interesting, that studying film has gotten into rodeo.

FH: It seems strange, though, because it’s such, like, a natural sport. It’s all dependent on how this animal moves.

FH: Is that very young for a bull-rider?

FH: Are you providing, like, knowledge to the younger riders?

EV: Eh…at this point in time, at this level, you know what you’re doing. We all kind of help each other, give each other pointers. There’s times when you’re down and you need someone to give you a little bit of advice, or just say something nice. You’re here for that. I’ll take advice from these 18-year-old kids, and they help me, just like I may help them. The rodeo’s not like any other sport. We’re not competing against each other, we’re competing against the bulls. Everybody’s pulling for each other, and everybody’s willing to help each other.

FH: I imagine it’s quite different in a rodeo locker room to a baseball or a football locker room…

FH: In what ways?

EV: It’s a lot different. Most of this stuff, I can’t even discuss on here. *laughs.* These guys are wild and crazy. If you’re here, you don’t really give a shit about a whole lot. That’s just kind of the mentality. I got to watch a hockey game for the first time the other day, a [Chicago] Blackhawks game. That’s probably the closest thing I can find to another sport that’s like bull-riding. Just, their don’t-give-a-shit attitude type deal, their killer instincts…we’re both underpaid compared to other sports. That’s maybe the closest big sport I can think of that’s like bull-riding.

FH: Yeah, I’ve had some experience with hockey players, they’re crazy people. They drink a ton, they really do not care—

FH: How are you paid when it comes to these events? Is it dependent on what place you finish in?

EV: Yeah, there’s no set pay. They don’t pay you to come and just show up.

FH: Yeah, that’s strange. I didn’t know that. Is there a push from rodeo riders to get more security, like to get the event to pay for transport—

EV: Yeah, y’know, things are getting better for us. We’re about to start a team deal. Where now we’ll be in teams, like any other sport. And they’re talking like they’re going to pay us a salary.

FH: And you’re in favor of that, I imagine?

EV: Yeah, any way we can get any bigger, and y’know, for the danger and everything, we don’t get paid near enough. So if there’s any way we can bring in some more money, and I can get these guys and myself paid what we feel like we deserve—

FH: How would teams work for rodeo?

EV: Y’know, I’ll let you know next year. *laughs.* I don’t know. I’m not a guy that’s over there, analyzing it, keeping up with everything…y’know, just tell me where I need to be, and what time.

FH: I see you won the PBR Rookie of the Year [award]. I don’t really know what that means, uh, you told me you weren’t a rookie—

EV: I’m an older guy, but last year was my first year coming over to the PBR, so therefore, in the PBR, I was a rookie. Whether you’re 40 or y’know, 19 or 18, when you come in, everybody’s eligible for Rookie of the Year. There were, I think, 15 other guys who were also rookies—really good guys—so it was definitely an accomplishment.

FH: Finally, I’d like to ask if you’ve ridden in Chicago before, and how it’s different from other cities.

EV: I don’t know if I’ve ever ridden in Chicago before. I don’t think I have. I go to a different town about every weekend, so it’s hard to keep up…But no, I don’t think I’ve ever rode here. And it’s cool. It’s definitely colder than where I’m from. But yeah, it's been a good time. The people here have been great, and the rodeo last night was great. It ranks up there, for sure.

FH: Thanks a lot for your time, Eli.

Eli Vastbinder finished eleventh at the Chicago Unleash the Beast event, with a score of 85.5. After a good first round, he was bucked from his bull in the second, and received no points. He finished the round just outside the top 10 riders, which meant he was not able to ride in the third round and accumulate more points. The event's winner, North Dakotan rider Stetson Lawrence, finished with an aggregate score of 266.75 over three rounds. Lawrence received $46,125 for winning the event; Vastbinder was paid $1000.