What Does Entertainment Mean in Apocalyptic Times? 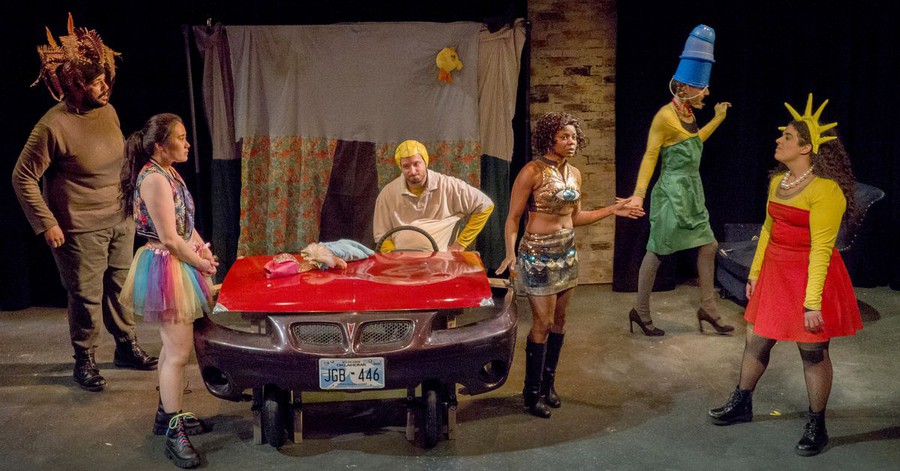 These relevant questions lie at the heart of Anne Washburn’s Mr. Burns: A Post-Electric Play, a production most recently headed by director Jeremy Wechsler at Chicago’s Theater Wit. The play tackles questions of societal meaning, nostalgia, and art through the postmodern lens of the popular television show The Simpsons.

Act 1 takes place around a small campfire, in a world rife with fear and misinformation after an unspecified calamity has eliminated electrical power from the world. A small group of survivors crowds in as one attempts to recall an episode of The Simpsons, “Cape Feare,” from memory. Wechsler’s production capitalizes on the strengths of the scene, such as the physicality of actors drawing near as the narration escalates. While the original text is written in a compellingly natural style that mimics contemporary speech patterns, it is the realization of these lines by actors that makes the scene feel so real.

The decisions made in delivery—from realistic portrayals of forgetting what one was about to say next, rambling, interrupting, and talking over one another—make this strange, alien world feel like reality. Two particularly memorable moments from the character Matt recalling the episode included the voices he employed for particular characters and an instance when he was laughing too hard to continue his next sentence. These choices lend the first act an uncomfortable voyeuristic quality, as though the audience is overhearing a conversation at the dining hall rather than attending a play.

The second act transitions to a more developed version of the same post-apocalyptic world, where the characters have formed an acting troupe that relays The Simpsons episodes. It is in this act that the commentary becomes most textual, as characters discuss the nature of storytelling, entertainment, and even the purpose of commercials. Even The Simpsons episode they perform ties back to this theme, as the plot centers around Homer taking on a new identity in the witness protection program—much like acting. One of the standout moments of this act is a long show tune medley of popular 2000s songs, featuring the eerie acting style of this new world: large, uncanny smiles and overacted movements, as well as unblinking eyes set right at the audience.

The third act is perhaps the standout moment of the play, transitioning from a portrayal of realistic characters to an in-depth look at the same story adapted 75 years in the future. The episode of The Simpsons has transitioned into an epic, almost operatic work, full of references to the calamity and an increasingly violent tone. Wechsler’s production capitalizes on the drama with ominous Greek theater masks and an intense moment of audience participation, where the villain Mr. Burns urges the audience to clap (which our audience gladly engaged in).

Ultimately, this production is a rousing success due to creative staging, costume design, and enthusiastic acting—Leslie Ann Sheppard’s Quincy/Bart and Andrew Jessop’s Sam/Burns are two standout performances. The only things that hold the play back are flaws of the original text, such as the overly long and repetitive nature of the script—the book tends to belabor the point, making scenes drag.

It is not an exaggeration to claim that the Western entertainment landscape is shrinking. As cable TV declines in the wake of titans like Netflix and Disney+, as Disney+ acquires competitors such as Lucasfilm and 20th Century Fox, and as the box office is dominated by a singular cinematic universe, remakes, or adaptations of popular book series, it feels now more than ever that Hollywood is running out of stories to tell. The Simpsons is itself indicative of this shift, running for 32 years and over 700 episodes despite declining viewership. The tendency of the characters within the play to cling to old media is more reflective than ever of both our culture at large and the rising capitalist tendency to repackage nostalgia itself as an object of consumption. The Simpsons episode referenced within the play, “Cape Feare,” is a reflection of this pattern: it is a parody of a 1991 film, which is itself a remake of a 1962 film, which is based on a novel from 1957. Even before the show has begun, the ouroboros is eating its own tail.

The production at Theater Wit takes pains to embody this commentary on pop culture by enhancing the show through relevant references. While The Simpsons is less current than when the play was penned (many of my peers had not seen any episodes, and I am no different), the production intentionally referenced cultural titans such as Star Wars in musical cues, added the eye of Sauron from Lord of the Rings to the background of one of the sets, and even included a nod to Billie Eilish’s “Bad Guy.” This thematic echo can be easily seen in the costuming of the third act—The Simpsons characters’ costumes are composed primarily of repurposed trash, tying into the idea of recycling (whether ideas or physical objects). More than that, however, it echoes the idea of cultural artifacts. The trash itself displays long-forgotten logos, such as Ikea bags for Bart’s shorts, and other outfits made from Amazon packaging and chip bags like Doritos.

Perhaps the most unique aspect of Theater Wit’s Mr. Burns is the emphasis on the audience’s immersion and implication in the narrative itself. From the first act, when the actors shine a flashlight on the audience while searching for an intruder, the audience becomes a part of the show. Ultimately, in the capitalistic consumption of art, the audience itself becomes a character, motivating creators to cater to and consider it in every creative decision. Wechsler’s production capitalizes on this yet again in Act 3 when Mr. Burns calls on the audience to clap and shout during one of his villainous monologues. The theater itself is used as a venue of storytelling. Specific musical choices during the intermissions set the tone for the next act (such as 2000s pop songs by Britney Spears and Lady Gaga before Act 2 or ominous, atonal xylophone and harmonica music that introduces Act 3). Similarly, environmental details were revealed between acts, such as through a line of murals of The Simpsons in various pop culture appearances (including Lisa as Dorothy from The Wizard of Oz or Bart wielding a lightsaber). Perhaps the most effective aspect of the set design was the various chandeliers and lamps hung from the ceiling, which were completely dark until the quite literally electrifying ending of the third act.

Despite the play’s dismal setting and grim reflection of artistic realities, Washburn’s vision of humanity is not so pessimistic. Perhaps Act 3 can be viewed as a redemption for art and theater in its stark differences from the source material–turning The Simpsons, a bright, parodic sitcom, into a dark opera. Mr. Burns ultimately suggests that art reflects the circumstances under which it is produced, and so long as those continue to change, so will art itself.