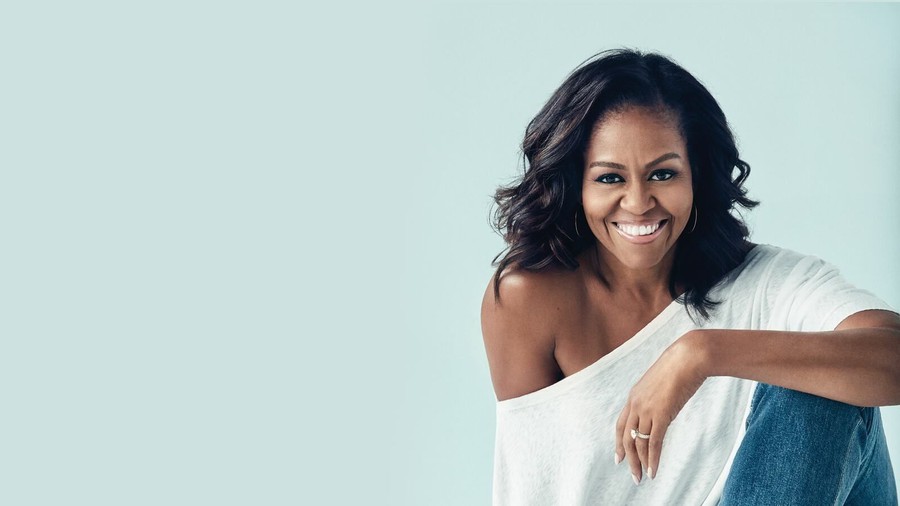 Courtesy of Center for Identity + Inclusion

Michelle Obama spoke to a group of college students from 22 schools around the country about her book Becoming for a virtual livestream event that was broadcast nationwide on November 9. The "Michelle Obama in Conversation with Students" Livestream Event and Viewing Party was sponsored by Penguin Random House. Actress Yara Shahidi moderated. Fourth-year Dinah Clottey attended as one of the student speakers.

Shahidi brought up the experience of first-generation college students, noting how many experience imposter syndrome. Obama offered her point of view, saying that students can change their self-perspective by carefully choosing which voices to listen to and paying attention to their achievements. She advised the students to “live through the imposter syndrome.”

Clottey, a first-generation student herself, related to Obama’s experience. “I'm a low-income first-generation student. And being a Black woman on top of that, I've come to terms with the fact that certain spaces are not being designed for me,” Clottey told The Maroon in an interview. “But just like Obama, I attempt to push through.… And that's what Mrs. Obama has taught me. Whether I'm fed grains or whether I'm fed a feast, I'm still in control of my own destiny.”

Obama noted how women often suffer from self-doubt. “We as women talk ourselves out of something before we even try it because of those imposter voices,” she said. “Make sure you practice making your voice heard. Don’t be quiet at the table, ask a question, ask a dumb question,” Obama continued. “Do it just for the practice of it.”

Obama talked about fear, saying, “If you practice letting fear stop you, that’s what you’ll be: you will be stuck.” Dayo Adeoye, a fourth-year in the college who attended the Livestream in Mandel Hall, resonated with Obama’s perspective on fear. “In this day and age the weight of her words felt even more pertinent. The same day that we watched the live stream was the day of the multiple homicides and bomb threats which… reasonably pushed people into fear. The fear was palatable on campus,” Adeoye said. “I resonate with us practicing confronting that voice like she mentioned and making a practice of that type of confrontation in order to make it to the other side of fear.”

Obama touched on her experiences dealing with people who doubted her, saying, “My mindset was: pshh, I’ll show you.” She talked about how her self-proclaimed “feisty temperament” allowed her to “work [her] way out of doubt.” She also spoke about the importance of “letting [her] work speak for itself,” saying that in order to demand what she deserved she had to “come to the table with proof of [her] excellence.”

She also touched on the pace of social progress, saying “big change takes a lot of time.” She encouraged the younger generation to avoid getting complacent when it feels like change is taking too long. “Put a marker in the sand to leave for the next generation,” she said. Obama emphasized that while she might not see the finish line, she takes pride in knowing that a future generation will benefit from her work.

When one of the students in attendance asked if minority students have a responsibility to enter into underrepresented industries, Obama encouraged the students to follow their passions. “Life is long,” she said “If you pick one of those sacrificial jobs to help the people, you might drown in it.”

She also remarked that “diversity is missing everywhere,” and so the most important thing for students to do is to “bring excellence to whatever [they] do,” and to “think about bringing people along.” She told the students: “make room at the table for people like you… in any space that you find yourself in.”

When asked how minority students can take pride in their experiences, histories, and identities in spaces where they’ve never existed before, Obama recognized that the responsibility of being the first can be draining. She encouraged the students to first “acknowledge that [they] will be carrying [a weight], and then build more muscle.” She told them to bring their full selves to whatever space they may find themselves in. “Don’t hide [your identity], don’t explain it, don’t excuse it,” she said.

Obama ended the event by talking about the power of small actions. “You have more of a chance of changing the mind of your grandfather than you do knocking on a stranger’s door,” she said, encouraging the students to engage with their communities. “All of my advice starts here, with you first. That’s really all you can control.”