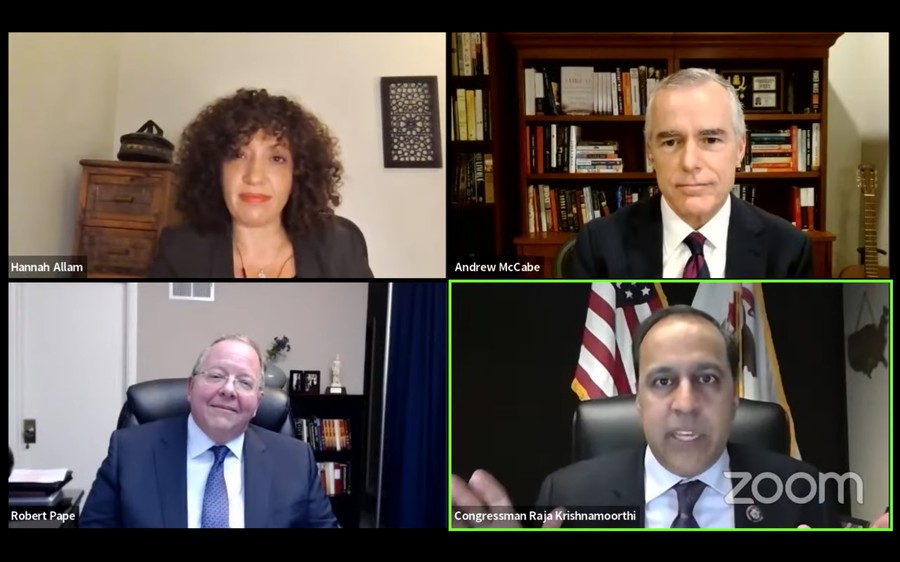 Former deputy director of the Federal Bureau of Investigation (FBI) Andrew McCabe, UChicago political science professor Robert Pape, and representative Raja Krishnamoorthi (D-IL) reflected on the January 6, 2021 attack on the U.S. Capitol Building during the Institute of Politics’s (IOP) first speaker event of winter quarter. The conversation, which was held over Zoom, was moderated by *The Washington Post* national security reporter Hannah Allam.

Krishnamoorthi recalled being inside the Capitol when around 2,000 supporters of former president Donald Trump stormed the building. Capitol police evacuated him from his office after a pipe bomb was discovered about 200 feet from his office window. The suspect, whom the FBI has still been unable to identify, placed pipe bombs outside the headquarters of both the Democratic National Committee (DNC) and the Republican National Committee (RNC).

“We’re still dealing with the scars of that day, and there are a lot of unanswered questions including why it took hours upon hours for the DC National Guard to arrive to put down the insurrection,” Krishnamoorthi said. “We are also wondering why so many of those 2,000 people have not been charged and arrested and are sort of roaming free at this point.”

McCabe, who worked on the FBI’s response to domestic terrorist attacks, including the Boston Marathon bombing in 2013 and the Fort Hood Shooting in 2009, expressed concern that the FBI wasn’t able to anticipate the January 6 attack.

“Watching these events take place, you can’t help but have that sickening feeling in your stomach knowing that this one got by the men and women of the FBI whose job is to prevent exactly these sorts of attacks from happening,” McCabe said. “An essential piece of maintaining your ability to protect this country is to go back and uncover what you might have missed and figure out how you change your work going forward.”

Pape shared predictions that future domestic terrorism threats may become increasingly difficult to anticipate, based on his research on the demographics of January 6 insurrectionists. In a January 5, 2022 report conducted through the Chicago Project on Research on Security and Threats (CPOST), Pape found that insurrectionists more closely resemble the American electorate than right-wing extremist groups when considering socioeconomic variables such as age, education, and employment. He concludes in the report that far-right support for political violence could be moving into the mainstream.

“When you have collective political violence and sentiments for that violence as it is now continuing in the body politic, that really is quite concerning,” Pape said. “We are used to dealing with this problem on the fringe. This is now front and center in mainstream America and is a major test of our democracy.”

McCabe agreed with the findings in Pape’s report and urged the FBI to extend its focus from the fringes of right-wing extremism.

“There’s been a lack of transparency on the part of the leadership across the federal law enforcement spectrum regarding their performance and how they think about changing going forward,” McCabe said. “Are you going to catch this threat if you’re focusing only on traditional right-wing extremists? I think the answer to that is no.”

“The Department of Justice has failed at properly and expeditiously prosecuting these 2,000 people,” Krishnamoorthi said. “2,000 people breached the capitol and committed crimes, 700 have been arrested, and 30 have been jailed. That is not a fast enough prosecution.”