Commuters are turning to bikes and skateboards to address the high environmental costs of car travel. 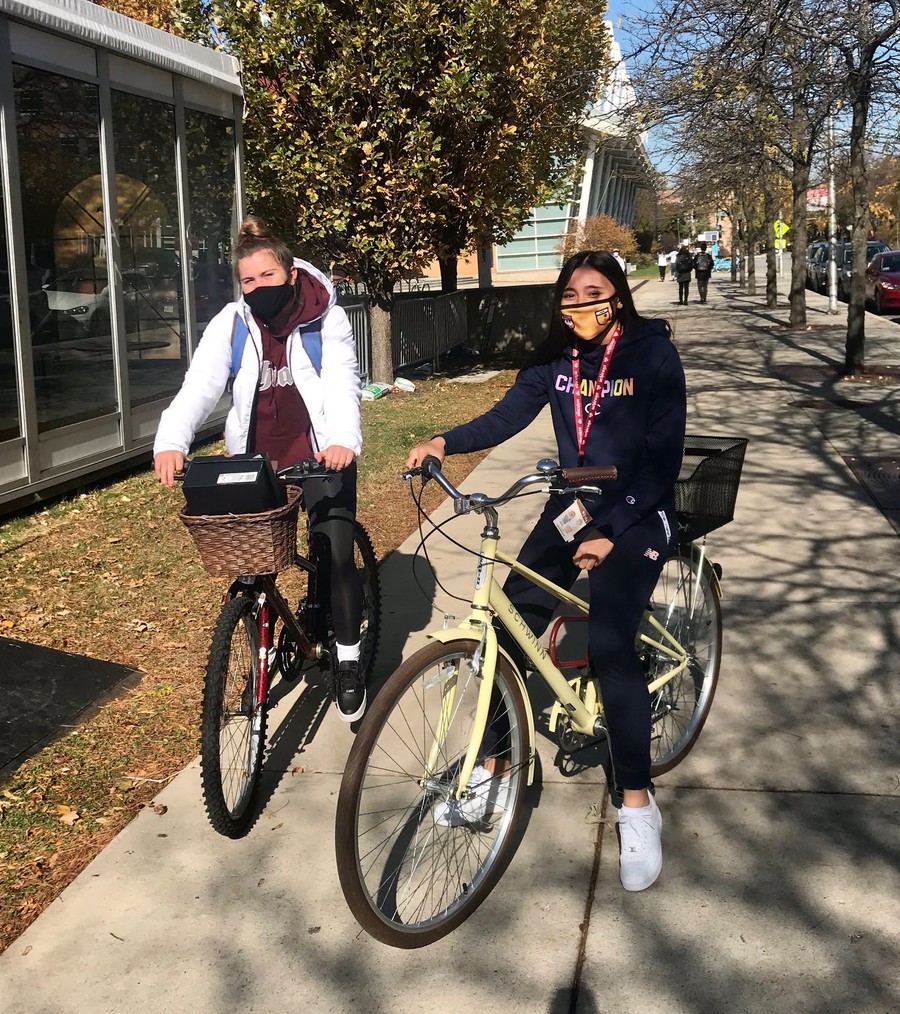 Second-years Ellie Vermillion (left) and Sophia North (right) regularly ride their bikes around campus, including outside of Ratner.

The combination of the growing problems of climate change and the societal effects of the COVID-19 pandemic have shifted the future of transportation away from cars and toward biking and skating.

Accredited sources such as World Economic Forum and the BBC are reporting that soon, cars will no longer be the most popular form of urban transportation. According to findings from a survey of more than 200,000 residents around the world conducted in 2020 by Mobility Futures, private car journeys will make up only 46 percent of trips in major cities by 2030, representing a 10 percent drop from current levels. It is estimated that, along with the drop in private car travel, there will be an increase in the number of people biking and using public transportation. Specialized programs like Citi Bikes are helping to accelerate these trends.

The researchers predict that biking will keep increasing in popularity, which will help relieve transportation problems in cities. Based on reports from the United Nations, more than half of the world’s population lives in cities, and that number is expected to increase to 68 percent by 2050, accentuating the pressure for more space. Many current college students embrace new ways to get around. More than 50 percent of college students surveyed by the American College Health Association in 2015 said they had ridden a bike in the prior year. That number is only increasing.

Sophia North, a second-year at UChicago, decided to bring a bike last year when she was assigned to live at Renee Granville-Grossman Residential Commons. North is also a member of the women’s basketball team and said the bike turned her 20-minute daily commute to Ratner Athletics Center into a five-minute trip. She soon started biking to class, stores, and parks. “[I] found that I was more motivated to go outside and do more things if it didn’t take me so long to get there.”

North has her driver’s license but still bikes in her hometown of Pittsburgh when traveling short distances, such as to the gym. She says it’s less practical to bike in Pittsburgh because she lives in a hilly area and things are not as close as they would be on campus. During summers, North visits Japan, where she “mostly bikes everywhere.” She said that in Japan, “biking is a much more widely used mode of transportation [because] many of the cities are very old, so the roads can be quite narrow for cars.” When she is there, she will bike “for recreation because it feels safer and is more enjoyable.”

The recent surge in cycling is also the result of a shift in people’s habits prompted by the COVID-19 pandemic. At the beginning of the pandemic, many people were anxious about using public transportation and were also seeking new ways to exercise. This created the perfect storm for people to go back to one of the most basic forms of activity: biking.

Cycling advocacy organization People For Bikes reported that beginning when stay-at-home orders came into effect in March 2020, one in 10 Americans rode a bike for the first time in a year or more, for the first time ever, or for a different purpose than before. The bike boom is driven primarily by recreational biking.

UChicago second-year Ellie Vermillion also loves biking recreationally. She said biking, which benefits her both physically and mentally, “allows [her] to be at peace and just take [her] mind off things.... Overall, biking is definitely a stress reliever.” North agreed with Vermillion that biking had positive physical and mental effects: physically because “it is a great form of exercise and cardio” and mentally “because getting from point A to point B won’t take as long as if I had to walk.” North also added that when she is in Japan, she “will often ride along the countryside just listening to music as a form of mental relaxation while still keeping me active.”

According to research done by People for Bikes, in March 2020, ridership on bike trails in the U.S. increased by nearly 300 percent year-over-year. Also, fitness tracking apps like Strava reported huge surges in usage even in sprawling cities like Los Angeles that have reputations for being biker-unfriendly. Bikes proved an effective way during a pandemic to maintain social distancing, get outdoors, and exercise. Major cities even made bike retailers “essential services” during lockdown, putting them on par with grocery stores. This kept bike shops open even as many other stores were closed.

The biking lifestyle may not be everyone’s preferred choice; many younger people prefer to wheel around via skateboard instead. Skateboarding has seen a recent spike in popularity coinciding with the lockdowns in March 2020, which is no surprise given the fun it provides to users, the easiness of social distancing while skateboarding, and skateboards’ suitability to outdoor spaces. Historically, skateboarding was often identified as something rebellious, and skaters were often stereotyped as misfits or punks who like to destroy public property for fun. SkateboardersHQ, a blog dedicated to the sport, reports the general population is more accepting of skateboarders than ever and that there are now many publicly funded skate parks to facilitate the activity. A study from the University of Southern California is investigating how skateboarding teaches tenacity, creativity, and focus and how these skills can influence success in school and the workplace. Skateboarding even made its debut as an Olympic sport during the summer Olympic Games in Tokyo 2021. Another impetus for the rise of skateboarding is the traction it has gained on social media. Skaters can now be seen by the world and can even make a living out of honing their craft and accumulating followers. In addition, it has become easier to learn skateboarding because of the increase in online platforms and resources available to teach this esoteric sport.

Skateboarding is not just a means of transportation; it is a culture with its own world of fashion and media. Companies like Thrasher, Vans, and Supreme started out as niche brands for your typical “punk” skater, but with the huge surge in popularity of skateboarding, these brands have gone mainstream. Thrasher magazine, the most prominent media outlet about skateboarding, saw its popularity rise and reach new people when non-skaters started wearing their merchandise. Now it is common to see non-skaters wearing Vans, Element sweaters, or even DC hats. Even Supreme, now a billion-dollar company, started out as an underground skate shop but took off in popularity when non-skaters discovered it.

Overall, the trends toward these alternative means of transportation can be seen as an unexpected upside to the habits induced by the pandemic. As more and more people adopt these active forms of transportation, cities will be able to continue building infrastructure for more sustainable modes of transportation and cope with climate change.