The Greening of Professional Sports 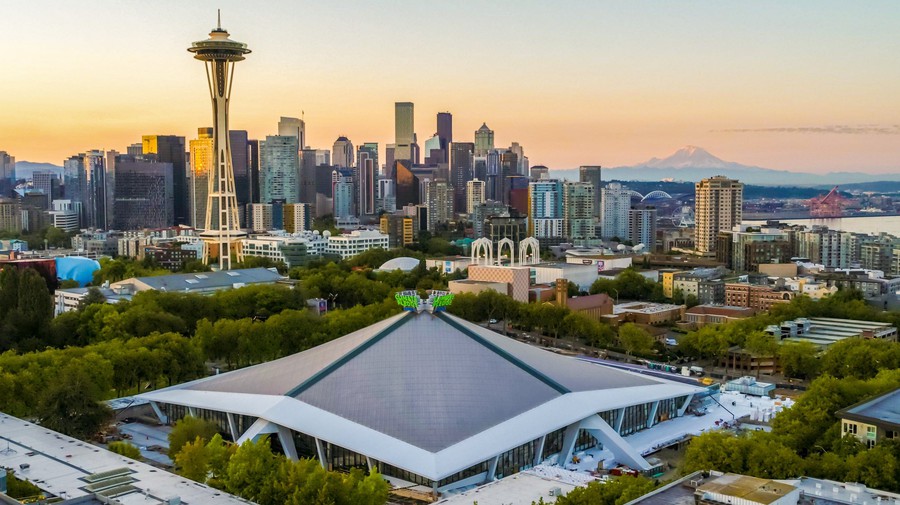 The Climate Pledge Arena in Seattle's sits at the site of the 1962 World's Fair. Courtesy of CLIMATE PLEDGE ARENA

Between extensive travel demands, heavy resource use for stadium upkeep, and significant waste generation, professional sports can strike an observer as a black hole of environmental consumption. The four major North A merican sports leagues—the NFL, the NBA, the NHL, and MLB—generate 35,000 metric tons of carbon dioxide from fans’ activities alone each year, and their attendant stadiums produce monthly utility bills that reach as high as $200,000, according to the environmental ser vice company Waste Management. Adding in team activities results in another 122,000 metric tons of emissions, as teams fly a total of 7.5 million kilometers in pre-pandemic seasons, based on a study from Concordia University in Montréal, Canada. The combined carbon footprint of the 2010 FIFA World Cup in South A frica; 2014 FIFA World Cup in Brazil; and 2016 Summer Olympics in Rio de Janeiro, Brazil, was equivalent to that produced from burning 11 billion pounds of coal. Even UChicago sports teams have a noticeable climate impact; in conference season alone, the men’s and women’s basketball teams travel more than 5,000 miles via plane and bus.

As efforts to increase sustainability have gained momentum across industry sectors, professional sports have demonstrated renewed and creative dedication to green solutions. In the outline of its proposal, the Paris 2024 Olympics bid committee promised to present the “Greenest Games Ever,” a pledge that proved persuasive to the International Olympic Committee’s selecting the city as the host site of the Games. The upcoming Games expects to reduce emissions by up to 55 percent of what prior Games in Rio and London produced by focusing on repurposing existing venues. The only new structures will be an aquatics center and temporary buildings, constructed with low-carbon materials. All spectators will be able to take public or shared transit to the events, relying on metro, commuter rails, buses, and bicycles. 85 percent of athletes will be housed within 30 minutes of their competition site, similarly reducing their associated travel.

Germany, arguably one of the most climate-forward nations in the world, took the emphasis on sustainability a step further in its successful bid to host the 2024 UEFA European Football Championship. The governing body has outlined 14 initiatives that the tournament will promote, including the introduction of sustainable long-distance travel for fans, the creation of the German Sports Climate Fund “to make the funding available and promote ecological behavior” by local clubs, and the uptake of renewable energy.

While these green solutions have often originated across the Atlantic, more and more North A merican teams are beginning to prioritize environmentally friendly models. The four major sports leagues have each adopted some sort of green initiative and partnered with the Green Sports Alliance, a group that focuses on advancing “social and environmental responsibility using the influence of sports.” But the greatest strides are coming from individual teams. The Philadelphia Eagles offset their carbon emissions from air travel by planting trees in Pennsylvania and for a wildlife refuge in Louisiana. The Cleveland Guardians not only have a recycling program that diverts 25 percent of waste from the landfill, but they became the first team to have a wind turbine power part of their facility. The Red Sox have outfitted Fenway with a solar array that produces nearly 40 percent of the needed electrical energy.

The City of Seattle has supported its sports teams in driving eco-conscious competition. Seattle Sounders FC became the first professional soccer team in North America to go entirely carbon-neutral, driven by “the immense responsibility we have as environmental stewards,” according to owner Adrian Hanauer. For more than a decade, the Seattle Mariners have led MLB in sustainability efforts through hosting the first carbon-neutral game in 2008, installing the first LED stadium lights in 2014, and generating almost entirely recyclable products. Most recently, the construction of Climate Pledge A rena, which houses the WNBA’s Seattle Storm and the NHL’s newly formed Seattle Kraken, has provided a template to revolutionize the design of sports venues. The 740,000-square-foot space was designed with three goals, according to its architecture firm Populous: “to create the most sustainable arena in the world, to responsibly revitalize a historic landmark and to cultivate the ultimate fan experience.” Powered entirely by electric and solar energy, the arena will be the first to earn a net-zero carbon certification, meaning all energy use and emissions will be offset. To create an innovative “rain-to-rink” system for the Kraken, rainwater is captured, filtered, and used to resurface the ice for the hockey rink. Other initiatives underway at the Climate Pledge Arena include its integration into existing public transport networks, the preservation of green space for community members, and a focus on creating zero waste consumption by 2024.

Of course, the climate crisis is only going to worsen, and professional sports must continue to advance their initiatives. So what other sustainability initiatives are on the horizon? Some teams
are opting for entirely vegan menus and locally sourced food; others are creating ‘climate’ tickets that grant access to public transport and contribute to sustainability programs for a small premium. The sports world will continue to look towards creating solutions. As Scott Jenkins, a cofounder of Green Sports Alliance, told The New York Times: “We have an urgent need to act and business as usual is not going to cut it. The challenge is, how do we get others to follow?