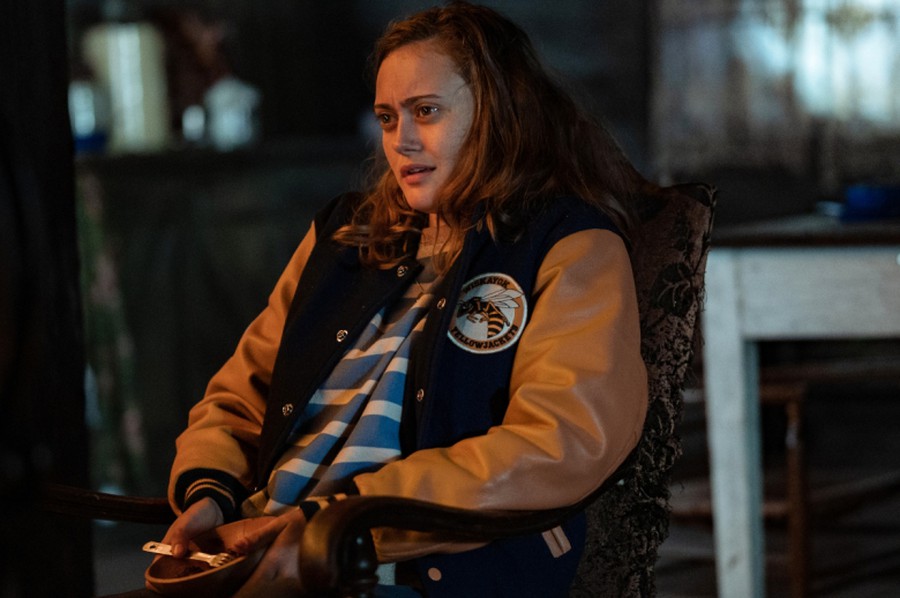 Yellowjackets wastes no time in thrusting its audience into the thrilling, grisly, traumatic, and compulsively watchable world in which its characters reside. The drama from Showtime, which concluded its 10-episode first season in mid-January, opens with an unidentified girl running away from a pack of hunters, her teammates clad in ceremonial beast-hides. Who are these girls? How long have they been in the woods? What–or who–has led them to this frenzied state? And why can’t I stop watching?

Created by Ashley Lyle and Bart Nickerson, the series is bifurcated into two primary timelines. One timeline, set in 1996, tracks a desperate attempt for survival when a plane carrying the Yellowjackets High School girls’ soccer team crashes in the Canadian wilderness. The other, set in 2021, follows four of the middle-aged survivors, navigating the reverberating trauma that their teenage selves both witnessed and partook in as they attempt to hide the truth of what really happened. In less able hands, the separate timelines could be dismissed as a gimmick, but here, they are necessary and complementary, allowing for a deeper dissection of its subjects.

Ritualistic cannibalism is certainly a hell of a hook, but the true feat of the series is the depth of its character development and exploration, supported by an outstanding ensemble cast. The four protagonists—Shauna, Taissa, Natalie, and Misty—are portrayed by eight actors, with one adult and one adolescent actor for each character. This set-up allows for the characters to both mirror each other and themselves, an ingenious framework for examining the effects of trauma.

In the past and present, Shauna and Taissa find themselves as confidantes and kindred souls. In 1996, Shauna is the wallflower to her best friend Jackie, unassuming but masking deeper ambitions and betrayals, while teenaged Taissa is a driven problem-solver, versed in secrecy. In 2021, Shauna (Melanie Lynskey) is a stay-at-home mother, stuck in the monotony of New Jersey suburbia, and Taissa is a state senate candidate, considered to be “the queer Kamala.” Yet these public personas do little to persuade the audience of their supposed normalcy. The disquieting ease with which Shauna captures, skins, and butchers a garden rabbit dispenses of any pretense that the demure image she projects is authentic. In a similar vein, Taissa is haunted on the campaign trail and in her home life by hallucinations and possibly supernatural beings, including the recurring appearance of a man with no eyes. Yet despite—or perhaps, because of—their divergent paths, they continue to confide in and protect the other woman.

Natalie and Misty reside on the other end of the spectrum, serving as foils. Their younger selves are both outcasts: Natalie, the defiant rebel with a violent home life and a burgeoning alcohol dependence, and Misty, the dorky team equipment manager striving to fit in. In the wilderness, though, both girls discover purpose and earn the admiration of their teammates due to their evident wilderness aptitudes. The effect of their newly-asserted social worth throws the girls into sharp relief. A practiced hunter, young Natalie provides wild game for the group and forms a romance with the head coach’s eldest son, Travis, sharpening her natural protective instincts and stripping away the vulnerabilities she previously hid behind juvenile rebellion. Misty quickly acclimates to the wilderness, exhibiting triage skills and an unwavering, frightening comfort with the grisly that makes her invaluable to the rest of her team—a feeling she savors and wields with menace. Their present-day storylines reinforce both the similarity of their status and the critical differences in their response. While Shauna and Taissa have ostensibly moved on, the other pair seem stuck in the same rut. Natalie (Juliette Lewis) is bouncing in and out of rehab, still totting a shotgun around with her, and Misty, played with an unnerving (and unblinking) charm by Christina Ricci, is a full-time nurse frequently indulging in the torment of her patients and a part-time “citizen detective.” When a blackmailing subplot forces the women into an uncertain coupling, it becomes clear the plane crash and ensuing time spent in the wilderness created a haven for Natalie to escape the troubles that plagued her, while causing Misty to both realize and embolden her worst impulses.

"Yellowjackets" follows a Canadian high school soccer team after their plane crashes in the wilderness.

The ensemble, headlined by former child stars of the 1990s (Lynskey, Lewis, Ricci), are deeply realized and supported by strong screenwriting and a killer soundtrack full of hits of the time period. While minimalist and simple, the directing and cinematography cast an uncertain pale over the past and present happenings–the creeping camera and shadowy sets contribute to a pervasive sense of foreboding, confounding audience and character alike as to the true source of their torment. The ultimate triumph of the show is the writing that grounds a narrative threatening to tip into the absurd. The mystery that defines the first five minutes—the identity of the girl being hunted—retreats to the background, replaced with the more urgent questions that characterize their realities. Where will their next meal come from? Who is sleeping with whose boyfriend? Who is blackmailing them and what do they know? Will they be rescued and when?

The show takes pains, occasionally overly so, to juxtapose the terrors of primitive survivalism against those associated with adolescent girlhood; for instance, one standout episode does a nimble job balancing the motif of bloodshed, weaving together menstruation and deer carcasses hung to dry. Their antagonists are not purely environmental or external but, frequently, fellow survivors. The viciousness and cruelty of high school girls remain intact even in the Canadian wilderness, although social hierarchies are upended and inverted. Team captain and queen bee Jackie finds herself increasingly isolated, while Lottie, initially shown to be a wealthy yet lonely child, ascends to the throne of tribal leadership. The series aptly juggles and unravels the difference between the horrors we are forced to inflict because we have to and the ones we inflict because we want to.

Yet, despite its focus on dark subject matter, the series succeeds in presenting us with fully formed protagonists. There are moments of genuine levity, typically found in the past: roughhousing and swimming in the nearby lake; a group of girls giggling during an attic séance; a choreographed dance to Montell Jordan’s “This is How We Do It”; the exhilaration of nascent romance. Because in the end, regardless of location or circumstance, Yellowjackets shows girlhood adolescence to be an experience equally traumatizing and thrilling.