Come With Me to See the Symphony 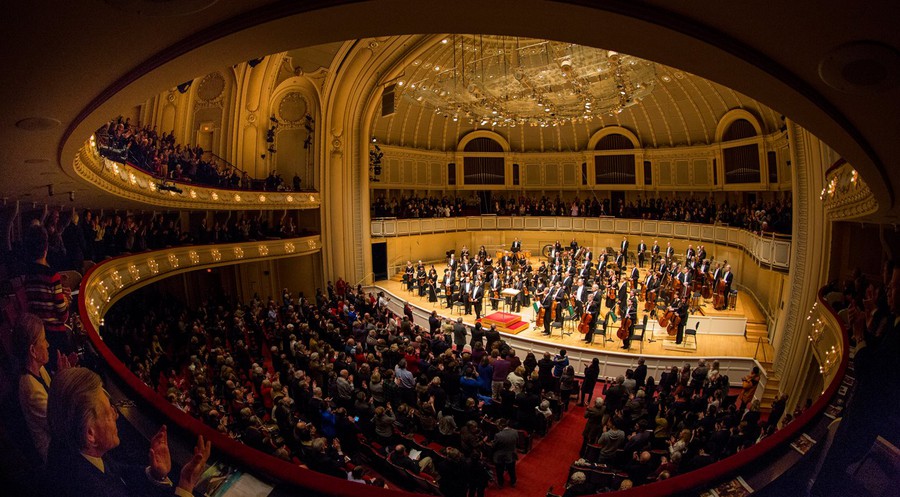 The Chicago Symphony is having a terrific season and not one worth missing.

On the evening of February 10, Marin Alsop, a guest conductor at the Chicago Symphony Orchestra (CSO), took a moment to address her audience before the program’s final piece. I wanted to record her remarks, but I had already shut off my phone and didn’t have a pen handy. At the end of the performance, I tried to record what I could remember, but didn’t get far:

“It’s wonderful to be performing for you all tonight,” she said, or something similar. “I want to thank you all for your support of the symphony through these COVID days. There’s something special and important about live music…”

Perhaps my failure to recall more of Alsop’s words stems from just how adept we’ve all become at tuning out these fatigued introductions. They grate on the audience’s patience and serve as little more than thinly-veiled requests that patrons request a donation envelope from their usher. By the time Alsop actually introduces the piece, Elgar’s Variations on an Original Theme—which, by nature of its peculiar origins, merits particular introduction—I have already refocused my attention on the gold filigree embellishing the hall’s luxury booths. Which, unlike Alsop’s remarks, I will have plenty of time to study later.

My wandering focus is unfortunate, as is the dull character of Alsop’s preamble. The reality is that the symphony is both “special” and “important.” Like all live arts, it lends vibrancy to an urban life that “these COVID days” have tried desperately to efface. Alsop’s sentiment (if not her staid diction) is worth embracing, lest we forget the joy that comes from languishing in live performance and being present for the artists who paint with bows and mallets and double-reeds.

The Chicago Symphony is having a terrific season and not one worth missing. For University students, tickets to the symphony are cheap. They’re available through the University ArtsPass for only 15 dollars each; purchasing student tickets is intuitive, accessible, and requires minimal setup. Most concerts put on by the symphony have student tickets available.

Since my return to campus this January, I have seen two performances of the CSO: the first, Baroque, Vivaldi, and Handel, at the tail end of January; the second, more recent and less easily defined, a consortium of Barber, Rachmaninoff, and Elgar on February 10.

The Baroque pieces, conducted by the CSO’s Music Director Riccardo Muti, were melodious and pleasing, refined yet altogether unpretentious. It is not especially demanding music, except perhaps on the focus of restless listeners (a few of these, less willing to relish in the tempered pace particularly of Handel’s Water Music, were in my party; one was gently reminded of his location by an usher).

Vivaldi’s Concerto in B Minor for Four Violins, the opening piece of the program, was the star. With the symphony paired back to just the strings and harpsichord, four violin soloists conversed in delightful exchanges of sharp and delicate tones; the melodies flitted back and forth with an electric zeal and the full-bodied character of musicians simply speaking through their instruments. The piece’s minor key was almost Eastern in its haunting flavor, more closely recalling the Jewish folk music I was raised on than the jaunty compositions of Vivaldi’s baroque contemporaries.

The following Vivaldi flute concerto, La Notte, did not carry itself with the sort of exacting style common in baroque music; the solo flutist often veered toward a tone too gravelly and unrefined. Handel’s Water Music, the entirety of the program’s second act, made memorable use of the symphony’s French horns, which periodically entered and withdrew from the piece with gorgeous, regal composure.

The concert on February 10 was a longer program. It began with Barber’s Symphony No. 1, a piece unfamiliar to me. It was wildly dramatic, sweeping in its scope, reminiscent of those exotic film scores composed by Maurice Jarre for David Lean’s Lawrence of Arabia and Doctor Zhivago (it was reminiscent also of the works of John Williams, who is always liberal with his appropriations). For the Barber, Alsop unleashed the brass and drew heavily on the timpani; at times, every waistcoated body on the stage moved in vigorous unison, bound by the veracity of the composition.

Rachmaninov’s Piano Concerto No. 2, featuring Lukáš Vondráček as solo piano, followed the Barber composition. While the tempo dragged occasionally, Vondráček’s duet with the upper woodwinds in the Adagio sostenuto was seamless and entrancing, evoking those moonlit palatial gardens in which Rachmaninov must have accompanied the romances of the last of the fur-coated Russian nobility. The concert concluded with Edward Elgar’s Variations on an Original Theme, known colloquially as the “Enigma Variations.” At this point, a program waltzing past two hours was too demanding of my attention; it took the fiery conclusion of the Variations (modeled, supposedly, after the habits and mannerisms of Elgar himself) to pull me back into the rapture of the music.

All this is to suggest that a performance of the symphony is, to a certain extent, like any popular concert: For most of its duration, it is both enjoyable and entertaining, even if there are moments which challenge our patience or taste. Classical music—especially that performed by a symphony as prestigious as the CSO—is rarely boring. After all, these pieces have aged for decades or centuries. With new music written constantly, the benchmarks of the classical repertoire hold a quiddity that is, by necessity, both moving and entertaining.

I do not intend to stop frequenting the CSO any time soon. Upcoming concerts with available student tickets include a performance of the work of Philip Glass, a 20th-century American composer, and Berlioz’s Symphonie Fantastique, both within the next month. Both performances promise to delight, even in “these COVID days”—and I hope to see you there.