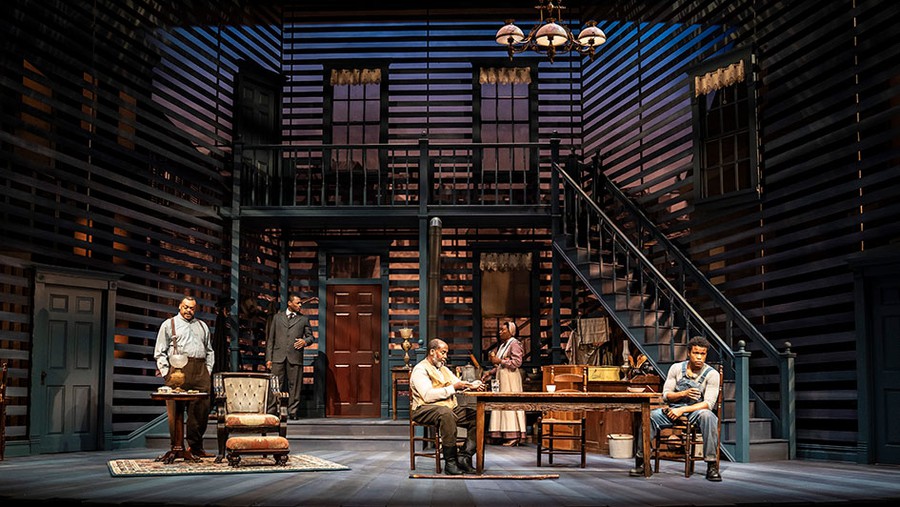 There was something slightly eerie about seeing behind the walls of the home as if we were truly looking into another world.

When I first heard that Gem of the Ocean was playing nearby, I was jumping with joy. I have recently been on a journey to read and view each of August Wilson’s plays, and this was one of the final steps. Gem of the Ocean is one of the few underperformed August Wilson plays and for that reason, I feel that, from the perspective of young directors and producers, the show can take on many forms. In that way, I appreciated the inventive initiatives that director Chuck Smith took to put on the show—it was astonishing.

Gem of the Ocean is the first work (that was ironically written last) of ten plays written by August Wilson known as The Pittsburgh Cycle. The Pittsburgh Cycle is a collection of works in which every play, each set in a different decade of the 20th century, describes the lives of Black Americans in the United States, specifically in Pittsburgh. Gem of the Ocean correlates to the first decade of the 20th century (1900–10) about fifty years after the signing of the Emancipation Proclamation and is thematically based on the inability of former slaves and their kin to truly be “free” of social constraints in the United States. The show examines the role of sharecropping and other economic limitations in the lives of both young and old Black Americans.

Gem of the Ocean takes place in the home of former slave and renowned healer Aunt Ester. Ester’s power is said to be the cleansing of souls. She lives with Eli, a protector, and her maid, Black Mary, whom she views as her protégé. One night, a very distressed young man, Citizen, breaks into her home in hopes of getting his soul cleansed. He admits he has committed a horrible crime and has been unable to live with himself since. He begs for Ester’s help, and she welcomes him with open arms. We are also introduced to two other characters, Solly Two Kings, a former slave who worked on the Underground Railroad, and Mary’s brother Caesar, an aggressive sheriff who is known for his brutality towards criminals. Caesar serves to distinguish between successful individuals in Pittsburgh and those who have been unable to feed themselves due to economic hardships. The show clearly creates parallels between the poorer, older former slaves, like Solly Two Kings, and the young, more successful Black folks in Pittsburgh, like Black Mary. We see this through Solly’s requests to Black Mary to read and write to his sister for him as he was never given the opportunity of an education. The comparisons between these generations show how life had both progressed and remained stagnant for many Black people during this period in history.

In the exposition, we are introduced to the town’s crisis. The steel mill in town takes advantage of desperate Black Americans searching for a job. The mill offers a wage, but the workers must pay for their own food and lodging, placing the young workers in debt and forcing them to work without fair pay. We learn that a young man who worked at the mill is accused of stealing and, in anguish, killed himself. The young man served as a sort of martyr for the other workers as they began to riot against the mill. The plot revolves around the cleansing of Citizen’s soul as pieces of the crisis interweave with the opinions and actions of our protagonists.

Gem of the Ocean is quite an emotionally heavy piece for both cast members and audiences to take on (I must admit I cried a good amount throughout the last twenty minutes of the piece). Even further, it is quite a long piece, clocking in at about three hours and twenty minutes. Though the story is wonderful in all regards, it was quite difficult to hold back the thoughts of: “How much longer is the show? Is this the final scene?” If you plan on viewing this stunning production, you should plan for a long, but fulfilling, night ahead.

On that note, the stage was incredible. The set is that of a home, but the walls are panels that the audience can see through. At first, the panels are used to let us see what is going on in the house, but later in the show, they take on the role of a backdrop for video projections. I loved watching the actors stay in character even when they were not directly within our view. There was something slightly eerie about seeing behind the walls of the home as if we were truly looking into another world. The set designers were truly successful in their work.

Acting-wise, there were no complaints. Every actor was jaw-dropping, and I must give kudos to their work. Time-traveling to the historical period of Gem of the Ocean is exhausting, as the actors have to adapt not only their mannerisms but also their dialect. Specifically, I must state that Sharif Atkins, the actor for Citizen, encompassed his role extremely well. It felt as if I were watching a man who held the burden of the world on his shoulders. Citizen’s sadness was not only embedded in his speech but also in his body language.  Furthermore, Gem of the Ocean has quite a bit of a cappella singing toward the end of the show when Citizen is taken to the place where his soul will be cleansed, Bone City. The actors each brought their own unique voice to this a cappella piece and I cannot stress enough how wonderful the actors of this production were.

What is most disheartening about Gem of the Ocean is the parallels one makes between its setting and the present-day; its ethical concerns about lawfulness and the role of police officers in our lives continues in modern arguments. August Wilson puts forth the question: To what extent should those deemed “unfit for society” try to assimilate? To what extent should we follow the laws of a country when they are rooted in bigotry and hatred? And how can we remain calm when it feels as if our entire world is descending into chaos? I spent hours after watching the show contemplating my role as a member of society.

Seeing Gem of the Ocean at the Goodman Theatre, where it originally premiered, was a surreal experience. It felt as if I were sitting in the seat August Wilson sat in when he first experienced his masterpiece come to life. This production of Gem of the Ocean was a remarkable take on Wilson’s relevant storytelling of Black American issues. The production takes on both historical issues and modern societal problems, leaving its mark on its audience members.