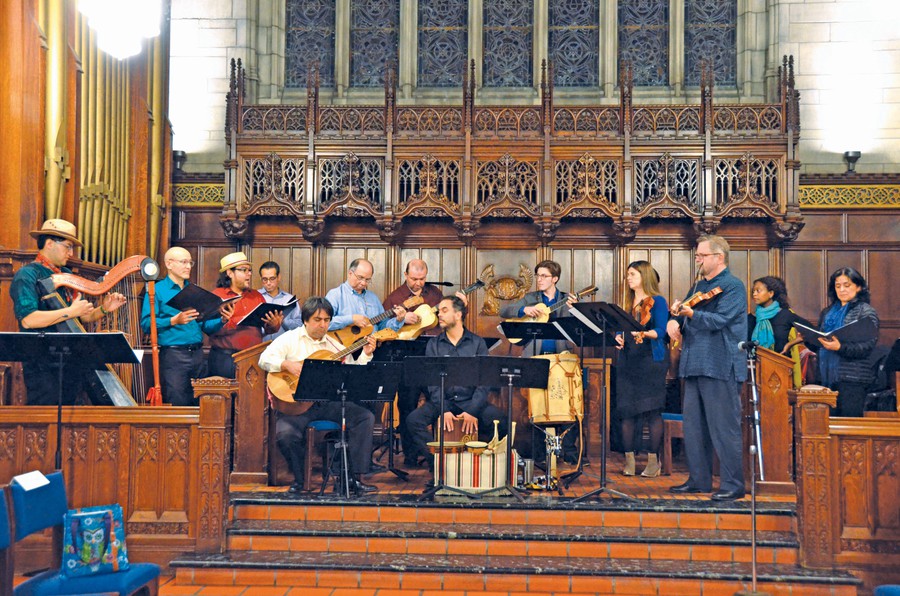 David Douglass (on the right) performs with the Newberry Consort.

Courtesy of The Newberry Consort

I have not touched a musical instrument with serious performative intent since around the age of 10, when I took my acceptable rendition of “Popeye the Sailor Man” at the local piano recital as a perfectly valid excuse to run off into the metaphorical sunset. So, you can probably imagine how nerve-wracking it was when I was asked to interview David Douglass, who is widely considered to be one of the most prolific Renaissance violinists and medieval concert curators in the world. The term “violinist” on its own—invoking mental imagery of a Stradivarius that was made before the signing of the Constitution and a level of discipline and performative precision that I find borderline superhuman—made the whole ordeal intimidating enough. But with the added “Renaissance” qualifier, I was certain that I was so unbelievably outside of my wheelhouse that the interview was bound to be a complete disaster, regardless of how much I read up on music theory or how many violin compilations I watched on YouTube in an active effort to procrastinate my Hum essay.

But then, something occurred to me: I might be about as far away from being the next Mozart as one can be, but I’d like to think that I’m pretty good at evaluating the cultural impacts of art on society and, subsequently, the impacts of society on art. Because of this, I had a hunch that Douglass’s added experience as a performance curator would help me get some fascinating information on not only his recent performance with the Newberry Consort, but also on how it reflects the sociopolitical climate of the pieces’ era. Sure, we’ve all seen some documentaries and read some novels and maybe even seen some plays about this time period. But what’s so different about a piece of music? What makes this performance really special? With that in mind, here are some thoughts from the biggest Lorenzo de’ Medici fanboy I’ve ever met on the birth of humanism, its impact on the arts, and the value of music as a communicative medium.

Adam DiMascio: For our readers who might not know who you are or what you do, tell me a little bit about yourself and what your involvement is going to be in the upcoming concert.

David Douglass: I direct the Newberry Consort, a group that seeks to give performances of Renaissance-era music in ways that are both seen and heard. We always do our best to provide concerts from what I like to refer to as a “historically informed perspective.” In order to play music from the Middle Ages or the Renaissance, or in the case of our upcoming performance, music from the Medici court, you need to know certain things. Not only about how the music was written and how it can be interpreted, but also the context in which the music was created in order to truly understand the meaning of the music. That’s what we provide to the public through our performances. We’ve got translations and graphics from the period to supplement the music itself, and the pieces are chosen so that they paint a picture of life at the particular time that we’re performing. In this case, the Medici court, specifically around 1400 or 1425.

AD: What kind of research goes into putting together a new performance?

DD: It’s extensive in terms of the music itself. But in this case, that was the simplest part. The two largest collections of music from the period are actually from the Medici Court, so I could just draw on those two sources for the music. But also there’s a lot of research that has been done about the history of the court and the role of the Medicis in their own society. That was particularly huge because this music was performed at a time that is considered to be the birth of humanism, the change in thinking where people generally became concerned with the idea of human potential, not just God and the church. There was much more focus on life itself. And that school of thought is what helped give birth to people like Leonardo da Vinci and several prominent composers. Lorenzo de’ Medici, in many ways, was a humanist hero of Florence. He worked with many musicians, and so his contributions to the arts for both Florence and the court [were] extensive, and I’m trying to bring all of that into this particular program.

AD: Beyond the visual aids that you previously mentioned, what are some ways that sociocultural norms can be uniquely conveyed through the medium of music, as opposed to something like literature or theater? How is the music that you perform indicative of the rise of European humanism?

DD: I think for our purposes, we have to be more focused so that the audience can enjoy the primary focus of humanism at this point. And I’d classify humanism, or this sudden awakening of regional humanism specifically, as an artistic philosophy that’s just about the joy of love and spring and birds and all of the stuff that’s earthly rather than some of the more nebulous, spiritual themes that preceded it. There was the Medici political influence as well, with the Pope at the time calling Lorenzo de’ Medici “a king in all but name.” And of course, there’s also his nickname, “The Magnificent,” which speaks volumes about the true scope of his achievements and how highly loved he was throughout his era. Because of his influence, he was not only amazingly wealthy, but incredibly benevolent. It was humanism that really shaped Lorenzo’s life and mind in order to create this new circumstance. That’s what I’m trying to bring to the program, this birth of an idea. The first half has to do with the more pastoral elements of that particular event, while the second half has to do with the fact that, for the first time in poetry and music and the arts, talks of the kind of things we experience as human beings that might be more base—like treachery and politics and untrustworthiness—and the effects that these phenomena can have on life. This is really the first time that those things are discussed in the arts, and it gives you an interesting insight to that. The concert ends with a Carnival song. Carnival was an important time, of course, and Lorenzo wrote a lot of poetry for Carnival that’s really bawdy, and we’re going to end with a piece from that era. And maybe I should tell you a bit about how I’ve constructed the program so you can understand how I tried to achieve this.

DD: I’ve got a lot of music from Cosimo’s (Cosimo de’ Medici) time, which is really the birth of humanism, and this explosion that carried Lorenzo throughout his life. Lorenzo, who was two generations later but still really in the 15th century, was much more advanced. He wrote a lot of poetry about the same subjects that affected Cosimo and the humanists of his life. So, I’ve designed the program to include some of Lorenzo’s poetry sprinkled throughout that kind of ties the whole thing together, and then also at the end the Carnival piece by Lorenzo himself, so that’s kind of like: “Don’t worry, be happy!”

AD: It seems like, even though the primary influence of this performance is Lorenzo and the Medicis, you’re pulling from several different related sources in order to convey this broader theme of the birth of humanism.

AD: When you say, “the music of the time,” what does that mean? The Medicis were obviously an extremely dominant regional family, both economically and politically, so I wonder how the music that they enjoyed would be reflective of the broader musical tastes of the era? Or is there not as great of a divide between the music that the Medicis listened to and the music that your average citizen of Florence would listen to than you might anticipate in the modern era?

DD: Well, that is true. There isn’t quite as large of a musical divide as you might think, but there still is to some extent because the rich and the poor had a huge economic divide. So, for a lot of music, the Medici court music that was a part of the upper classes, that music was preserved in the Medici Library. But it’s interesting, because there’s some dance music in the program that comes from a manuscript that was preserved in the Medici library and is unique among sources of dance music. It seems to have Middle Eastern connections, and it’s also particularly unique because it’s comparatively very long. If dance music was written down in this period, it was in short snippets. Here, however, we have a piece of music that’s around 12 minutes long. Long pieces. And you’d think that these sorts of things would have been choreographed as entertainment and not as something that people would have listened to. But still, you’ve got to think that the source of this music was influenced by what was happening in lower classes rather than the upper classes, as all dance music is, if you think about dance music or jazz music today. If you think of any kind of dance music really, you might make a lot of money, but its roots are certainly in simpler sources. And it’s the same thing with this music, it seems totally different from the vocal music that’s on the program that is definitely court inspired. I think that’s interesting, because it’s hard to know exactly what that is. But when you hear it, you know that this is something that goes beyond the Medici court.

AD: To bring it back to the performative aspect specifically, what do you think an audience member could gain from watching this performance that they couldn’t gather from watching a play or going to a Renaissance fair? What unique perspectives does this medium offer for a viewer?

DD: It’s going to give people a unique feeling. People go to concerts to get feelings. They’re used to the feelings of the things that they’ve heard on recordings or from the concerts they’ve gone to. This is a time and place that’s totally different from anything they’ve ever experienced, and they’ll get this amazing feeling of what it’s like to be alive then. Music has a tremendous power to bring that from any period. We get that if we listen to ’50s rock ’n’ roll; we weren’t alive then, but we know what it was like to be alive then. And the same can happen from something like 500 years ago, simply because it's such a unique sort of empathic scan.

So, folks, there it is: an expert’s take on some of the broader sociocultural implications of music and its subsequent integral role in the trajectory of artistic trends for at least the next century. I wonder what historians 500 years from now would think of our music. What would they say about our thoughts, our lives? What are Gecs, and why do we have 100 of them? Although, to be fair, I’m not even sure if we could answer that question now.