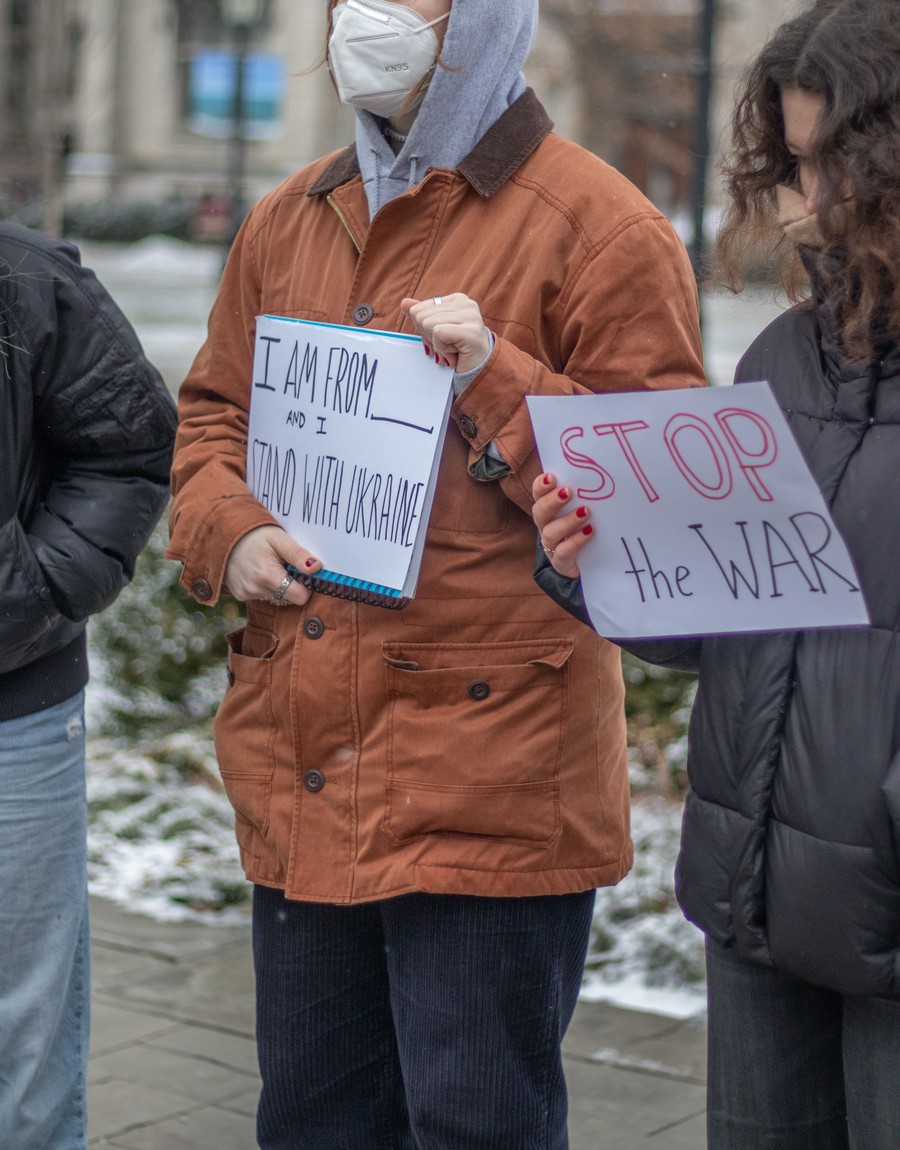 Note: In order to protect students’ privacy and safety, some names have been changed and faces have been removed from photos.

Around two dozen University of Chicago College students gathered on Harper Quad Thursday afternoon to stage a “Stop the War” protest against the Russian invasion of Ukraine. The rally was organized that day and was intended to raise awareness of the war in Ukraine as well as give students a forum for conversation about Ukrainian-Russian relations.

In a speech late Wednesday night, Russian President Vladimir Putin announced a Russian “special military operation” against Ukraine. Beginning in October 2021, the Russian government amassed as many as 190,000 combat troops along the borders between Russia and Ukraine and between Belarus and Ukraine. As of Sunday, more than 200 Ukrainian civilians have been killed, and Ukrainian and American officials predicted that a full-scale invasion of Ukraine could displace as many as five million people.

“Stop the War” rally organizers first-years D and P and second-year M passed out homemade signs and answered attendees’ questions for almost an hour. Signs included slogans like “Stop Putin,” or “I Stand with Ukraine.” D explained that she and her friends were from Russia but that they were strongly opposed to the Russian government’s actions. “Many people think we support Putin,” she said, but “I feel it’s important to try to raise awareness and stand with the people of Ukraine.”

“It’s just scary being so far away from what’s happening and not being able to help or really do anything,” D said. A first-year student from Ukraine who identified himself as Maksym shared D’s fear. “It’s really tough to be away from home at these times,” he said, “my city has been bombed…the Russians just blew up a bridge three miles away from my house last night.” Since the invasion, Russian military forces have targeted Ukrainian cities, energy infrastructure, and military fortifications with more than 160 ballistic missiles.

Maksym discussed his perspective on the war. “There’s a lot of talk in the news about how Russia has now invaded Ukraine,” he said. “Russia invaded Ukraine eight years ago. In 2014, I was 13 years old, and I remember seeing the Russian military on the streets of my city. It’s been in the background of my mind for eight years. We conducted drills in my school to learn what to do in case of an air raid or a chemical attack.” 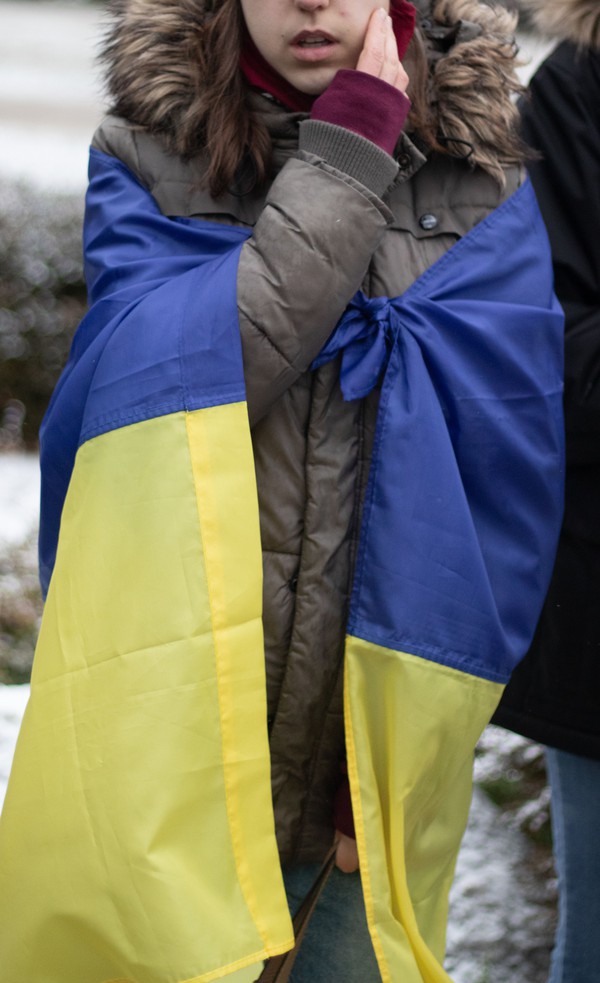 In 2014, Russian troops annexed the formerly-Ukrainian peninsula of Crimea and conducted a successful secession referendum there that most nations declared illegal. Earlier that year, large-scale protests across Ukraine had led Russian-backed president Viktor Yanukovych to resign and flee the country.

Maksym, D, M, and others stressed the importance that the war in Ukraine should have to Americans. “I think any person who still has any human decency would say that what Russia is doing now is reversing the world order,” Maksym said. “If it is going to be acceptable worldwide for one country to conquer another country, then our political systems will never be the same because powerful nations would just do whatever they want to do.”

In his speech, Putin falsely claimed that Ukraine has always been a part of Russia, but D explained that “although [Russia and Ukraine] have similar cultures which enrich each other, that doesn’t mean we have the same culture.” Maksym feared that “Russia has been trying to suppress Ukrainian identity and culture for many hundreds of years and if [Ukraine] doesn’t stop Russia right now this might be the last chance we get to do so.” 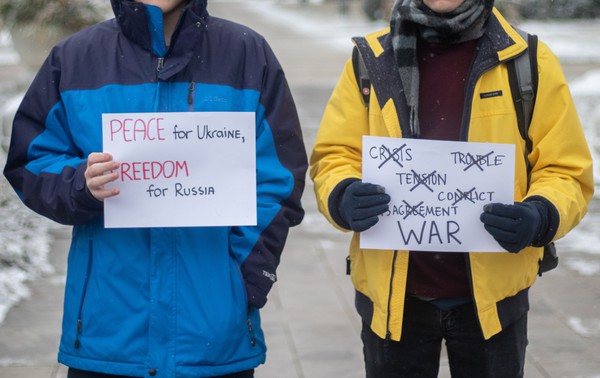 Though attendees were largely united in their belief that the United States should act to combat Russian aggression, they differed in what course of action they thought would be best. Many students called for sanctions from the United States and other western nations, and a few thought the United States should send arms and supplies to Ukraine. The Biden administration has repeatedly emphasized that American troops will not be sent to Ukraine under any circumstances. In recent days, however, the United States has imposed harsh sanctions on Russia including export blocks on American technology and measures against Russian banks. The Biden administration also plans to impose sanctions on and freeze the assets of Putin. M and other Russian students worried that the brunt of the sanctions’ damage would be felt by the Russian people.

Maksym proposed an alternative to sanctions, arguing that the United States and other North Atlantic Treaty Organization (NATO)  member nations should accept Ukraine’s bid to join. Ukraine’s bid to join NATO, the major western military alliance that promises mutual defense to its member nations, has been delayed since 2008, ostensibly because Ukraine has not reached NATO’s standards for governance and transparency. All students shared the belief that the United States must not stand idle. 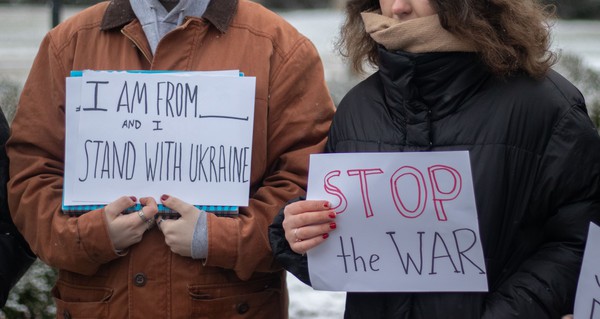 Ukrainian student Maksym, however, made clear that many Ukrainians will fight for freedom no matter what. “The priority right now,” he said, “is to make sure Ukraine can continue to stand as a country.… I see a huge Ukrainian spirit: If the fight is going to be really bad, then at least it won’t be short.”