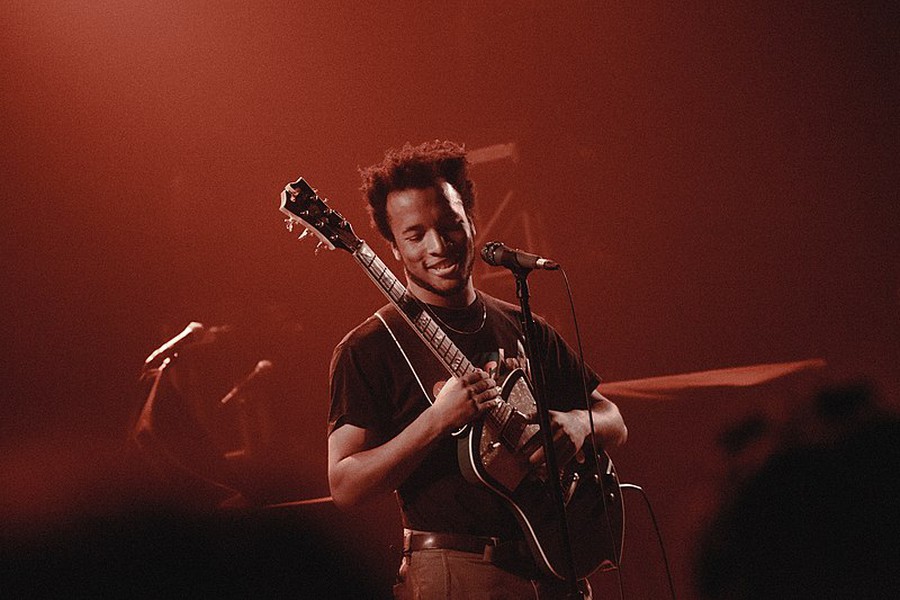 By Samuel Cody   and Natalie Manley

It’s not every day that you get to see an R&B artist whip out a flute, tenor, and soprano saxophone mid-concert. Oh yeah—and spontaneously whip off the bottom half of his pants somewhere in there too.

Who else could pull off such a spectacle but Cautious Clay? Hailing from Cleveland, Ohio, the 29-year-old classically trained woodwind player-turned R&B artist kicked off his Karma and Friends World Tour last week with a sold-out show at the House of Blues in Chicago. The tour celebrates the release of his first full-length album, Deadpan Love, which comes more than two years since he last went on tour for his EP Blood Type.

When we spoke with Cautious Clay a few days before the concert, he revealed that the Karma and Friends World Tour would feature an all-new lighting setup, his signature improvisational flute and saxophone playing, and a new member in his now four-piece band. That new member turned out to be up-and-coming 22-year-old jazz pianist and percussionist Julius Rodriguez, who grew up in White Plains, NY and studied under Wynton Marsalis at Julliard. In 2021, Rodriguez’s song “Actual Proof”, which he co-created with Cisco Swank, was named the second-best jazz song of the year by Spotify. Rodriguez, who is also known by his stage name Orange Julius, not only played keys and percussion for Cautious Clay but was also his opening act.

It was a little strange to have a non-vocalist jazz musician open for an R&B concert, but after warming up the crowd with a few mellow, modern blues tracks that honestly could have made their way on to a “lo-fi beats to study to” playlist, Rodriguez and his three-piece band launched into some more high-energy pieces, including their take on a Herbie Hancock standard complete with a truly funk-tastic Rhodes (piano) solo and another piece featuring bassist (and Rodriguez’s good friend) Philip Norris on an upright. The crowd, though clearly unfamiliar with Rodriguez’s music, and jazz as a genre in general, seemed to appreciate the group’s talent and musicality, cheering each time a member took a solo.

Rodriguez’s setup was rather bare bones, but the lighting equipment Cautious Clay spoke of in our interview was on full display during the intro leading up to his entrance. When Cautious and his band walked onstage following Rodriguez’s set, beams of white light projected from both sides of the stage, bouncing off of rotating mirrors placed in a triangle formation, while rod-like LEDs shone from within the mirrors themselves. The setup truly utilized a minimal amount of tech for maximal effect, and it was easy to see why Cautious was so stoked about his new lighting.

After a fun little intro piece, Cautious Clay launched into his song “Agreeable” off Deadpan Love and followed with the rather popular “Joshua Tree” and “Dying in The Subtlety.” Somewhere in this mix of songs, however, Cautious remarked how his pants kept falling down. Rather than carry on into his next song, he signaled to the sound booth to pause the show, then proceeded to remove the bottom half of his pants (they were the turn-into-shorts kind; fret not, there was no brute pants ripping). Of course, the crowd went wild, and Cautious carried this energy with him as he started his next song. The moment was a nice showcase of Cautious Clay’s easygoing, go-with-the-flow personality. It’s easy to forget at times that artists are people too, and part of the beauty of live performances is being able to see a more human side of a musician.

The middle of Cautious Clay’s set showcased a healthy mix of his more popular songs such as “Wild Fire,” “Woah,” and “Shook,” with some lesser-known songs like “French Riviera” and “Spinner” thrown in. Cautious Clay also played an unreleased new song called “Camp Anonymous,” which was a nice touch, though somewhat unmemorable.

Cautious Clay took full advantage of the live performance setting in order to showcase his improvisational flute and saxophone playing; he often picked up his tenor saxophone or flute mid-song to weave in a soaring solo before each final chorus. Though they weren’t the most technically advanced solos (Cautious Clay admitted in our interview that he in no way considers himself to be a jazz musician or anything of the sort), the live instrumentals added some delightful color to Clay’s performance and showcased his technical talent and unique sound. It was very clear from his playing that Cautious Clay had a strong musical background, and his incorporation of flute and saxophone into his songs clearly sets him apart from other similar artists.

The most memorable solos of the night came, however, from Cautious Clay’s guitar player, Chris Kyle, who took center stage on a few occasions and was by far the most prominent member of Cautious Clay’s four-piece band. Overall, the band complemented Cautious Clay well, but we would have loved to see more moments featuring individual members. Julius Rodriguez in particular played brilliantly in his opening act but never really got the chance to shine during Cautious Clay’s set, which was a bit of a shame. Francesco Alessi, who was on drums, made some cool stylistic choices throughout and definitely played with some of the grooves on Cautious’ songs, but he was really more complementary than anything. Similarly, Dan Pappalardo on bass certainly filled out Cautious’ sound, but we think there was a missed opportunity for him to add some funky bass fills and colors to the set. In general, we’re sure there was more technical stuff happening in the background that we didn’t catch on to, but for the most part, it wasn’t really highlighted—Cautious Clay was very much the star of the show.

Like Cautious Clay said in our interview, the Karma and Friends World Tour was meant to embody exactly that: good karma and good friends. We would argue that it did. Cautious Clay certainly brought his down-to-earth and genuine energy to the House of Blues and provided fans with an overall positive concert experience. The concert wasn’t a high-energy rave, but it wasn’t meant to be. The crowd was made up of more mellow fans who could relate to Cautious Clay’s signature emotive lyrics and moving sound. As Cautious said before his last song, “I’m an introvert, but I came out here to celebrate music with y’all tonight.” And celebrate music we did.