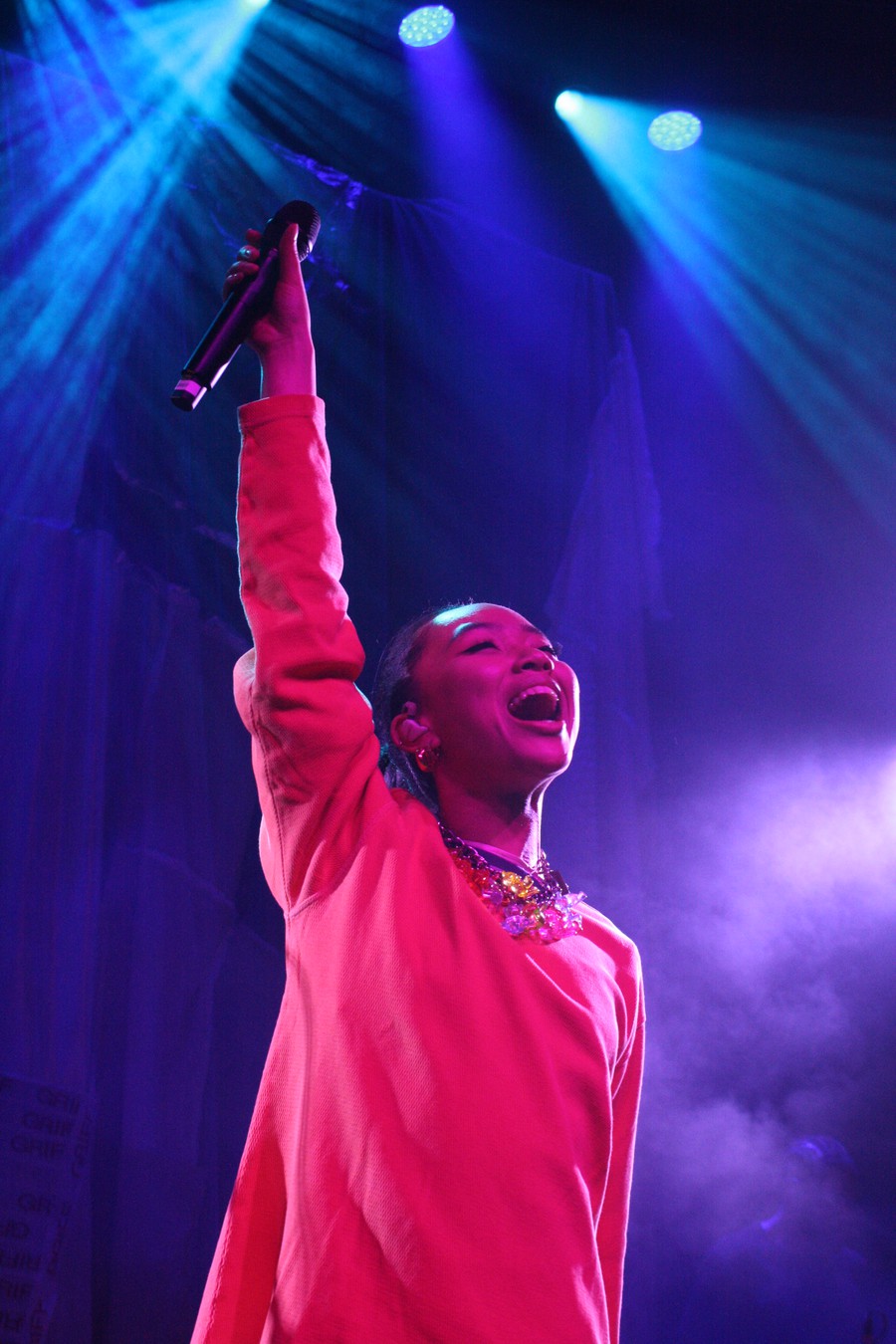 Griff’s effortless presence and bedroom pop backstory hide the amount of work she has put into her music.

By Sofia Hrycyszyn   and Jerry Shi

As the stage lights dimmed, the soothing monologue of a woman with a British accent came over the speakers.

“It started with me just making beats in my bedroom,” she said, and what sounded like interview excerpts turned into a personal address. “I didn’t expect so many people to relate to my songs, like yourself.”

Then Griff appeared on stage, in an oversized sweater atop a shimmering maxi dress that she presumably sewed herself. Her trademark ponytail—a series of oversized bulbs—flittered behind her. Her soft-spoken demeanor, complete with a hot cup of throat coat tea, belied her effortless ease on stage. She bantered with the audience like an experienced stand-up, at one point introducing the backstory for a song with the self-awareness that there might be a number of boyfriends dragged to her show. At another point, she gave directions to the sound booth to change her in-ear settings so she would feel less “lonely up here.”

Griff’s effortless presence and bedroom pop backstory hide the amount of work she has put into her music. According to interviews, she learned music production from YouTube in middle school. Her opening act, Amy Allen, recounted meeting Griff three and a half years prior at a studio writing session (which Griff attended after school). At one point in her set, Griff used a looping machine, a skill she had picked up in just a few days for her electrifying BRITs (British Record Industry Trust) Rising Star Award performance. The bedroom pop self-made beats, the looping machine, the guitar and piano, the homemade outfits, and even the backdrop (a series of flat sheets sewn together haphazardly) all gave a distinct DIY aesthetic. It was as if Griff was telling her audience, “You could do this too.”

Crafted during lockdown, the seven-song mixtape One Foot in Front of the Other mines the highs and lows of adolescent existence like Taylor Swift (who cosigned “Shade of Yellow”), Lorde (whose “Royals” she blended into a live rendition of “Heart of Gold”), and countless other talented young female pop artists. Despite these influences, Griff herself might be loath to agree with any such comparisons. In introducing “Head on Fire,” her freshly released collab with Norwegian songstress Sigrid, she said the song came about after becoming frustrated with the music industry’s unrelenting comparisons of female artists. Unlike the early discography of Lorde and Taylor Swift, Griff’s music is about a distinctly different era for youth: A never-ending global pandemic, increasing inequality, a climate crisis, the constant threat of mass casualty events, and an attention span hijacked by multinational tech corporations have impacted today’s youth in ways that could not have been predicted in the time since her pop predecessors rose to prominence.

Despite her young age, the universal relatability of Griff’s songwriting means that the majority of her audience at her all-ages show is in their twenties and thirties, if not older. It’s an effect that Griff sometimes intentionally cultivates. In the introduction to “Good Stuff,” which appears on its surface to be a generic breakup anthem, Griff says she wrote the song about the loss she felt when the children her family fostered would move on to their forever homes. She admits she wrote the song from the perspective of a breakup to make it more relatable to a wider audience.

Griff also says her debut single, “Mirror Talk,” is a self-addressed letter reminding yourself you can’t stare in the mirror forever, hyping yourself up with affirmations and pep talks. At some point, you have to turn to reality and move on with your life. Her setlist traces a similar outline, beginning with the difficulty of healing in “One Foot in Front of the Other” and imploring self-forgiveness in “Forgive Myself” before exploring the euphoria of love in songs like “1,000,000 X Better” and ending with her biggest hit to date, “Black Hole.” Griff started with an acoustic rendition to get the audience singing along before her backing band joined in. Sadly, the heavy kick of the bass drum that gave more texture and layers to the melodramatic production of the song was missing. Despite the cheers from the crowd for an encore, when the song finished, Griff was gone, and stagehands quickly appeared to tear down her set.