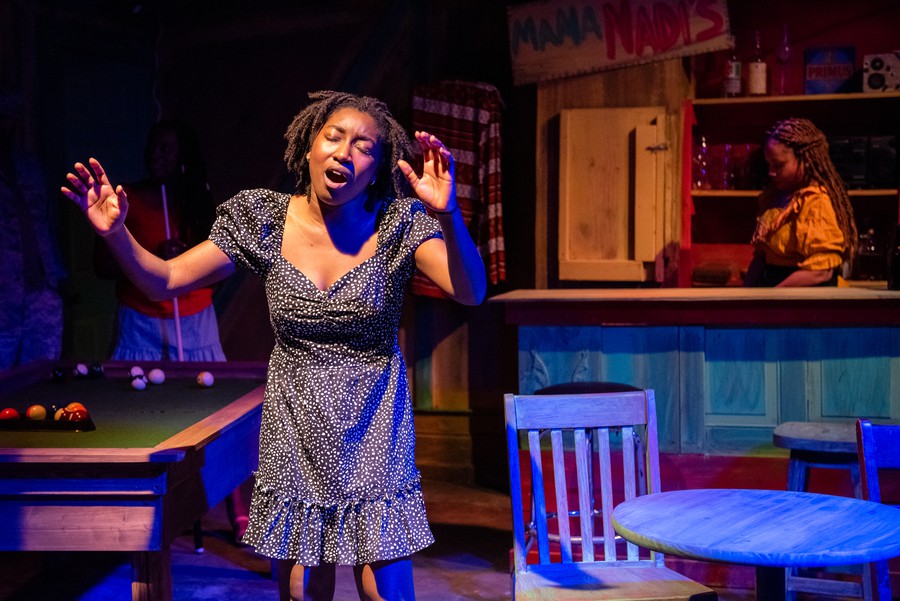 Just north of Chicago, Invictus Theatre Company brings Lynn Nottage’s Pulitzer Prize–winning play Ruined back to the Windy City with a powerful, scarring, and intimate production. Ruined, which first premiered at Chicago’s Goodman Theatre in 2008, explores the plight of women in the civil war–torn Democratic Republic of the Congo.

In a small mining town caught in the middle of a nationwide struggle over resource control, Mama Nadi (capably played by Tekeisha Yelton-Hunter) runs a bar that caters to government soldiers and guerillas alike. Mama Nadi’s bar serves patrons beer and watered-down whiskey while female employees entertain and indulge the fighters. Among the women at the bar are Josephine, a strong-willed prostitute (played passionately by Jemima Charles), and Salima (with a forceful performance from Courtney Gardner), a woman kidnapped and abused by rebels for five months only to be rejected by her husband upon her return.

Jenise Sheppard is brilliant as Sophie, a young woman who arrives at Mama Nadi’s permanently scarred—“ruined”—from a rape by bayonet. The South Side native, in her Chicago theater debut, shines throughout the show. She shows her pain in every step she takes, and her motion and accent both feel authentic. One cannot separate Sheppard from Sophie, whose broken terror slowly gives way to youthful hope and occasional exuberance as she learns to navigate her way through difficult and often dangerous circumstances. All four of Ruined’s women command the stage, but Sheppard in particular has a way of making her presence powerful even when curled up in a chair or hiding behind Mama Nadi.

Yelton-Hunter’s performance as Mama Nadi is also notable. Though her delivery was not always polished, Yelton-Hunter continuously conveyed the range of emotions Mama Nadi faces as she tries to protect herself and her girls in a world where nothing is certain. Mama Nadi must avoid making enemies—a high task when combatants from both factions are regulars at her bar. The soldiers take liberties when they desire, and Mama Nadi’s complicity stems from recognition of the inevitable rather than resignation to it. Yelton-Hunter is both sarcastic and serious; when she raises her voice, it is never without thought. Her singing is rather ethereal where Sheppard’s is broken and blunt. In the performance’s intimate setting, Yelton-Hunter’s myriad smiles and grimaces were fantastic.

Seating only a few dozen individuals, The Reginald Vaughn Theater is the perfect location for a play that emphasizes physicality and brutality. There are graphic scenes of sexual and physical assault as well as maternal mortality; at times, the actors are mere inches away from the audience. In the program, Ebby Offord (with a stellar directorial debut) writes, “I don’t want anyone to come see this play and feel comfortable distancing themselves from any of it.” Offord achieves her goal: Ruined is meant to provoke feelings of shame, fear, and unease, and Invictus’s production does just that. Beyond the overt sexual violence, though, physicality pervades Offord’s Ruined: Mama Nadi and Sophie embrace after Sophie is caught stealing; soldiers grab each other and fight, sometimes falling to the ground in drunkenness.

Ruined is loud and intense. There are moments of quiet towards the play’s beginning, or during scene changes when moody music plays in the background, but by the end of the show, the volume has been cranked to ten. Almost every character yells at some point during the two-and-a-half–hour runtime. As an audience member, one must watch actively, monitoring multiple interactions occurring on stage concurrently.

At times, Mama Nadi, Salima, and traveling salesman Christian (played by Stanley King, who moves his body to full effect) come across as preachy. The play as a whole, however, delivers its message more subtly. For example, the use of the same ensemble actors to play both government and rebel soldiers seems to indicate that the Congo’s combatants blend together in their destructiveness. Christian’s lapse from jovial sobriety into indignant drunkenness conveniently mirrors a rise in military presence midway through the play.

The play’s set and costuming are evocative, the lighting is minimal, and the atmosphere is tense. Ruined’s creative design complements a play that feels sure of its identity.

Pulitzer Prize–winning for a reason, Ruined triumphs in that it never attempts to explain civil war or explain away characters’ faults. Everyone is human, heroes and villains alike. Ruined is uncomfortable to watch, difficult to look away from, and impossible to ignore.

Invictus Theatre Company’s production of Lynn Nottage’s "Ruined" is playing at at the Reginald Vaughn Theatre through March 20.