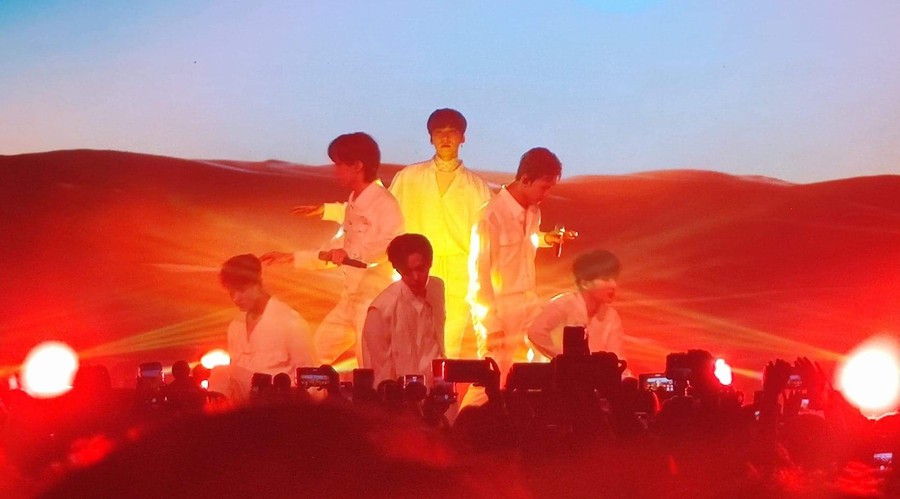 K-pop often feels like more than a genre, encompassing far more than the music released in every debut or comeback.

K-pop often feels like more than a genre, encompassing far more than the music released in every debut or comeback. Watching a K-pop concert, therefore, feels like more than a live rendition of music. It’s theatrical, it’s parasocial, and it’s entirely performative, from the first “Hi Chicago!” (take a shot every time the moniker “windy city” is mentioned) to the final bow. Yet there’s something about the performativity of K-pop—the acrobatic and synchronized choreography, the elaborate costumes and set designs, the carefully crafted relationship between idols and their fans—that makes it all the more engaging to watch live.

K-pop group Oneus is no exception to this. Having fallen out of K-pop’s orbit for the past few years, I went into this concert with fairly low expectations and a crash-course yeah-I’m-a-journalist-I-do-my-research knowledge of the group. I came out half-deaf and half-hoarse from cheering, with a newly established “bias” (favorite member).

Oneus started the concert strong, with tracks like “COME BACK HOME” and “BLACK MIRROR” instantly throwing the audience into a frenzy. The bass thrummed through Concord Music Hall, and the choreography matched the intensity, often featuring a member’s being raised into the air or standing on another’s back before jumping off. Their setlist was saturated with these strong performances, and even as the group opted for the occasional slower song or prerecorded skit, their energy never waved or flagged.

What is being an idol1 but the career of image construction? Oneus musically wowed their audience, pushing their voices and limbs through rapid-fire rap, challenging vocal runs (from both the vocalists and the rappers of the group), and powerful choreography, but they also kept up the performance when the music paused. They never seemed anything less than sincere and excited as they reassured their fans that they had really missed them since their last time visiting Chicago in 2019, promised to continue “working to show a better side of [themselves],”2 and asked for their fans’ continued support while they did so. In between songs, they cracked silly jokes about Shakespeare and stretching—almost seamlessly blending memorized English and improvised Korean, which was relayed instantly by their off-stage translator.

“Did you know that the Cloud Gate looks like a bean?” (Yes, like the Cloud Gate that is nicknamed The Bean.) “What pizza topping would each member of Oneus be?” (Yes, this was a five-minute conversation that ended with the crowd’s cheering for Sprite vs. Coke.) Oneus’s rehearsed variety segments could best be described as shitposts, well-timed and interspersed between their loud, bombastic setlist.

There’s no denying that K-pop has taken the world by storm––from chart placements to music awards to global tours, the industry is only growing. Two U.S. tours by a group that only recently achieved their first weekly music show win (a general, if flawed, marker of success) would have been unimaginable five years ago. Indeed, despite a greater degree of popularity, Oneus’s older labelmate Mamamoo have never had their own U.S. tour (Rainbow Bridge World, Oneus’s label: If you’re reading this, please make this happen). Yet a key element to K-pop’s growth has been Western assimilation, with music that’s frequently indistinguishable from factory-produced Top 40 pop, appealing to audiences who would otherwise treat K-pop as a fascinating fetish.

It’s refreshing, then, to see Oneus embrace and promote traditional Korean culture as their musical strength. Their latest title track “Luna” was originally written with the Korean traditional flute pili, while their new version of “Lit” better highlights oriental musical instruments. Their costumes also reflected this traditional concept, as Oneus donned hanbok and incorporated Korean folding fans into the choreography of the two songs. The smaller venue worked to their advantage here, allowing the audience to see the intricacies of their presentation. 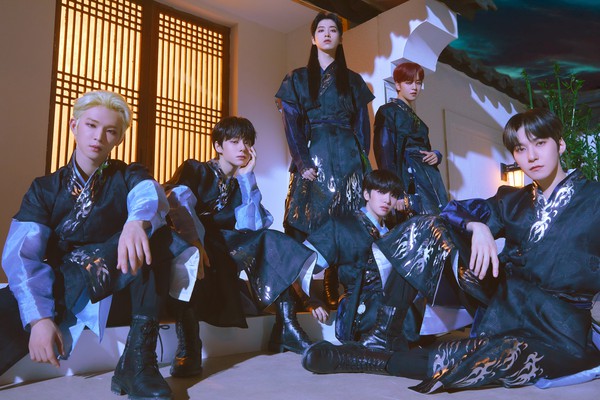 Oneus are arguably in their most visible era thus far.

After their first-ever music show win last year and a relatively successful appearance in Korean reality TV program Road to Kingdom the year prior, Oneus are arguably in their most visible era thus far; they’ve returned to the US eager to reconnect with their American fans and excited to reach more of them this time around. Their bond with their fans, who are nicknamed To Moon, is what drives them—following the platitude-laden path of superstars before them. Oneus’s Blood Moon tour is a celebration of how far the group has come and hopefully a sign of what’s to follow.3

Parts of this article were contributed by UChicago K-pop dance RSO neXus, who would like to add that if they could bring even a fraction of Oneus’s satisfaction and energy to their own dancing, they’d consider it a success.

1 Strictly speaking, “Korean idol” refers to someone who works in the K-pop music industry. Yet the phrase in Western media tends to imply, disingenuously, that K-pop as an industry churns out management-controlled robots—true to an extent, but a view that feeds into negative stereotypes of Asians’ having no personality. And so, we have employed the general moniker “idol,” which can refer to any celebrity whose career leads to intense adulation as a result of careful image curation.

2 Echoing countless other idol groups in expressing that everything is done for the fans, that by improving and working hard for said fans, idols can therefore be held up on an impossible pedestal where all facets of themselves must be perfect at all times (and any indication otherwise is vehemently pounced upon by their now extraordinarily loyal fans). You know, the sort of sentiment that causes adulation, leading to mass donation campaigns, coordinated harassment, stalking, and more.

3 Before their members have to do military service, the group likely gets phased out in an already oversaturated market.