The team took home titles and trophies from both the Fall Collegiate Chess League and the U.S. Amateur Team event. 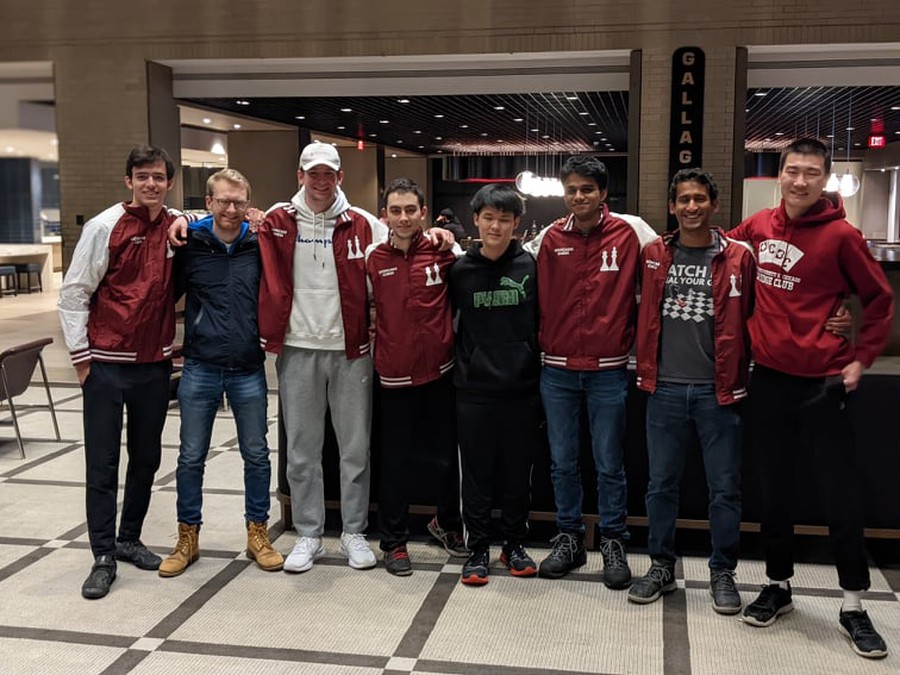 While the Chicago winter is merely a period of bitter cold for most, the University of Chicago Chess Club has been keeping warm in the heat of competition and blazing a trail of victory in their wake. From the frigid final weeks of autumn quarter to February’s surprisingly sunny exit, the team fought their way to top ranks at competitions ranging from the Fall Collegiate Chess League (CCL) to the Pan-American Intercollegiate Chess Championship to the U.S. Amateur Team-North event.

The winter also brought the return of William Graif. The previous president of the Chess Club had spent the entirety of autumn quarter playing chess across the globe. He expressed a sheepish joy at exchanging 3:30 a.m. Chess Club Zoom calls—a necessary consequence of Budapest time—for the team’s familiar stomping grounds in Hutchinson Commons.

Plus, returning to campus with yet another accolade and new title never fails to start the competition season on the right foot.

“It’s been a whirlwind,” Graif said. “I achieved what I wanted to achieve abroad, specifically being named a FIDE [International Chess Federation] Master. Then, I traveled Europe for a while with my girlfriend, visited New York for a little bit before heading to Virginia, and straight from Virginia back to Chicago.”

Graif’s personal success on his chess journey mirrors that of his team’s; autumn saw UChicago Chess being named the champion of the Fall 2021 CCL, along with the top prize of $5,000. The online tournament, which began as a small group of colleges competing against one another, has blossomed into an attention-garnering attraction for chess players and fans alike.

“Our biggest success of the year thus far was definitely the CCL,” grandmaster and current Chess Club President Praveen Balakrishnan said. “We were the underdogs going in, facing colleges around the world, with some of them known for recruiting grandmasters from around the world to play specifically for their college. So, it was a really special experience.”

Balakrishnan’s words highlighted the sheer magnitude of the club’s victory. The team opened the CCL playoffs with a 9.5–6.5 upset over the University of Missouri. Graif echoed Balakrishnan’s awe at the win.

“In the quarterfinals, honestly, I think we even surprised ourselves,” Graif said. “And the finals were extremely close. We were tied [with the University of Warsaw] 6–6 entering the last round, and we literally all won our very last games to make that final score of 10–6.”

Graif went on to emphasize that the team’s success could not have been achieved without the support and guidance of third-year and Chess Club Vice President Stephen Eisenhauer, who served as both organizer and team captain at the CCL. Dividing his time between the team and the pursuit of the joint A.B./S.M. in computer science, Eisenhauer—much like many of the Chess Club’s members—looks back on his earliest days of chess as a source of connection with his loved ones, which has transformed into the driving force behind finding his community on the University’s campus.

“I started playing chess ten years ago, as a lot of my older brother’s friends were chess players,” Eisenhauer said. “I basically just followed behind him to a chess club that he went to when he was a kid—he didn't stick with it, but I really enjoyed it.”

Following their victory at the CCL, the team took on the 2022 Pan-American Intercollegiate Chess Championships, where the club received praise and compliments from rival universities for their tenacity and dedication to the game.

“We had coaches at [chess] scholarship universities congratulating us on our program, and for how hard we worked to even be there to compete alongside them,” Graif said. “It was incredibly flattering, and the whole experience was so much fun that I thought, ‘even if this is the last collegiate chess game I ever play, I’m happy.’”

And while the UChicago A team was three points shy of the last spot in the Final Four, Balakrishnan emphasized the genuinely inspiring experience of being able to observe the team in their first in-person team event since the beginning of the pandemic.

“Before the rounds began, we would all come together in one of the member’s rooms, take out our laptops, and prepare as a team,” Balakrishnan said. “If we needed help in a certain opening, we could ask anyone in the room, but usually everyone would have some advice to share. It was a great shift from the virtual environment.”

Most recently, the Chess Club sent two teams to face off at the U.S. Amateur Team-North (USAT) event in Schaumburg, IL, from February 18 to 20. UChicago swept the competition, with UChicago B—consisting of Balakrishnan, Graif, Brian Hu, and the newest grandmaster on campus, first-year Awonder Liang—taking home first place, and UChicago A close behind in third place, led by Kapil Chandran, Christoph Eichinger, Dylan Sunjic, and Oliver Heggli-Nonay. The team also claimed the top college prize at the tournament, so UChicago B will be headed to the USAT Nationals at an as-yet unspecified date.

With spring quarter fast approaching, Balakrishnan jokingly feigned nerves at the idea of taking on the second season of the CCL as the returning champions.

“There’s more pressure on us this year because we won last time!” Balakrishnan said.

As the club continues to prepare for their next match, Graif emphasized how the string of successes are indeed a testament to the growth of the club and the bond shared between its members.

“In my first year, three people were coming to the club. And so, to now have 20 or so students registered for the CCL alone, with everyone very invested in each other’s play, all eager to help each other, it’s just excellent,” Graif said. “It’s truly been an honor and a privilege to compete with the teammates I have.”