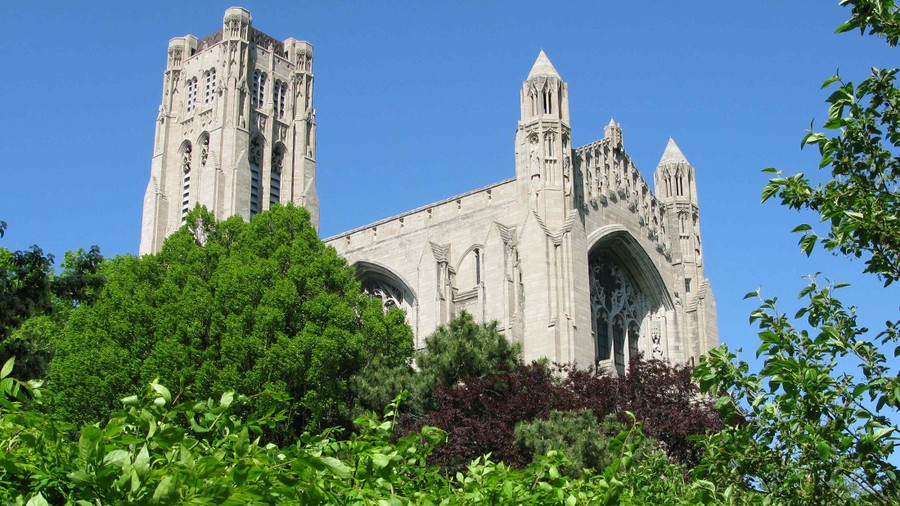 Second-year Esi Koomson, copresident of the Organization of Black Students, opened the celebration with a welcome address. In her speech, she introduced the agenda of the event and called upon listeners to take a stand for justice and equality.

Two artists from the Lyric Opera of Chicago—Whitney Morrison, a soprano, and Craig Terry on the piano—led the group in singing the Black national anthem, “Lift Every Voice and Sing.” Following their performance, University President Paul Alivisatos took to the podium and addressed the crowd.

Alivisatos’s speech highlighted King’s history in Chicago and at the University. In 1956, at age 27, King stood in Rockefeller’s pulpit and gave his first major address in Chicago. “We cannot slow up, because we have a date with destiny and we must move with all deliberate speed,” King told those gathered in Rockefeller.

“The values and ideals that Dr. King stood for both align with our own mission at the University of Chicago and challenge us to do more.… Cultivating an inclusive environment here on campus is critical to our mission. We cannot confront society’s great challenges without a wealth of perspective, experience, and creativity that a diverse community offers us,” Alivisatos said.

Alivisatos ended his address by reminding the crowd that King was devoted to economic equality, and emphasized the University’s commitment to addressing economic inequality on the South Side: “One of my most important priorities as president has been to deepen the connections between the University community and our neighbors—to create a more open and engaged University of Chicago.”

He noted a range of University programs across the city aimed at investing in the South Side, such as the Polsky Center for Entrepreneurship and Innovation, the Community Programs Accelerator, and the Inclusive Economy Lab.

“Let’s find new ways to work with our neighbors to create opportunities in education, health, economic growth, and violence prevention to improve the quality of life for people here on the South Side, and more broadly across our city of Chicago,” Alivisatos said.

Following Alivisatos’s speech, five University-affiliated individuals were honored with Diversity Leadership Awards for their work as leaders in “fostering diversity and inclusion and advancing the cause of justice and equality in our community and society.” Dr. Doriane Miller, M.D. ’83, received the faculty award for her work advancing health equity on the South Side of Chicago; Grace Chan McKibben, A.B. ’90, A.M. ’90, was awarded the alumni award for her work with Chinese-American communities across the city; and Ph.D. program academic adviser Cynthia Cook Conley received the staff award for offering guidance to senior administrators in issues of diversity, equity, and inclusion.

The celebration’s keynote speaker was Cheryl Brown Henderson, Founding President of the Brown Foundation for Educational Equity, Excellence, and Research, and owner of Brown and Associates, an educational consulting firm. Brown Henderson is also one of three daughters of the late Reverend Oliver Brown, the lead plaintiff in the 1954 Supreme Court case *Brown v. Board of Education of Topeka*.

She also discussed King’s *Letter from Birmingham Jail*, the work of the Brown Foundation, and the impact of *Brown v. Board*. Speaking about the lawyers who participated in landmark civil rights cases like *Brown v. Board*, she said, “They weren’t marching in the streets, they were marching into courtrooms. They weren’t carrying placards, but they were carrying legal briefs.” She emphasized the importance of both grassroots protest and action through legal and political channels to fight oppression.

The celebration showed footage of the Chicago Children’s Choir performing “Wade in the Water” and “Freedom Calls My Name,” both arranged by Mitchell Owens and the latter composed by him as well.

The final event of the evening was a panel discussion between Deborah Gorman-Smith, dean and professor of the Crown School, and Chris Harris, senior pastor of Bright Star Church and founder of Bright Star Community Outreach.

“A lot of times, people who swear they’re smarter than the community constituents…do things to the community when they think they’re doing things for the community. When in fact, the best way to bring systemic change is to do things with the community. Whether you believe it or not, those who have the lived experience in those local communities—they are actually the experts. If you take the time to talk to them and not talk about them, you will learn a whole lot from them,” Harris said. “Nothing about us, without us.” He repeats the five words often when discussing how to form fruitful and respectful partnerships across racial, socioeconomic, and educational divides, Harris said.

Toward the end of the panel, Brown Henderson joined Harris and Gorman-Smith in discussion. Brown Henderson and Harris reflected on the role of educators, specifically in the past few years, with the effects of the COVID-19 pandemic and social reckoning after the murder of George Floyd.

The two closed out the conversation by offering advice to UChicago students. Brown Henderson addressed students of color on how to cope with microaggressions on campus: “Young people, be confident in yourself, and know that you showed up to where you’re supposed to show up. When there’s an opportunity to show up, stand up and speak up—do it!… You’ve got a lot of power.”

Harris also encouraged students to learn more about King, saying, “Get to know the radical Martin Luther King. Not just the one who talked about the dream. Read about the one that exposed the nightmare.” Finally, he added, “If you are part of this great ecosystem, where we are seeing significant investment in our backyard, challenge this institution to make sure that the economic investment you see on the campus spills outside of the campus. If it’s getting built here, it shouldn’t be without it getting built over there, in the Bronzeville community and surrounding areas.”

The ceremony was closed by the Reverend Maurice Charles, dean of Rockefeller Chapel, who read the words of King: “We are confronted with the fierce urgency of now. In this unfolding conundrum of life and history, there is such a thing as being too late.”