Give Yourself a Break

At UChicago, resting is an unfamiliar but important habit to adopt. 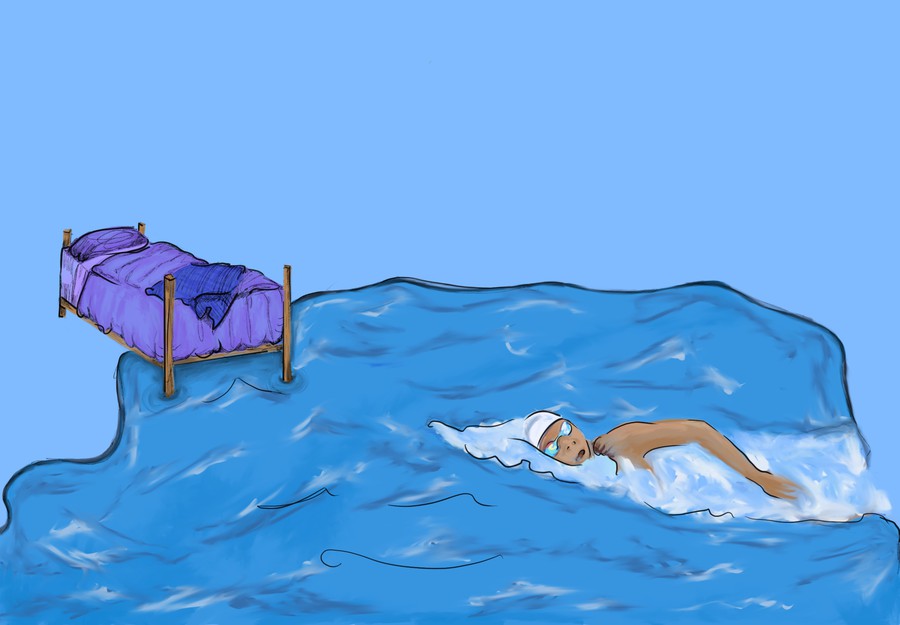 In seventh grade—which, now, feels like a lifetime ago—I was a competitive swimmer. I didn’t look the part, and I was never exceptional, but every day after school I would drive to the rec center with my dad, get changed, and leap into a deep blue pool to cross the length, stroke after stroke, lap after lap in perfect rhythm.

I remember most of it washed in a fairly hazy, idyllic light—butter-yellow sunlight streaming through glass windows, six feet of water under me, odd echoes of laughter bouncing off the ceiling, mingling with the bleat of a timer, of my coach’s whistle. But the one memory that stands out, that defined my experience, is colored wildly different from the rest.

A swim meet held in late November—informal, casual, but with water so cold that it may as well have burned—that I had spent the drive listening to pump-up jams, listening to my parents discuss the importance of “doing your best,” repeating what my coach had said: that I could be very good if I wanted to, if I didn’t give up, didn’t lose my nerve, if I pushed through.

This, of course, is the lesson we are all taught. That our success is inherently tied to our ability to persevere: that we must keep going, keep working, keep doing, even when it hurts. No, especially when it hurts. At UChicago, where fun famously comes to die, there is almost a spiritual reverence for this idea of suffering to succeed, and it’s an attitude that I believe is doing us far more harm than good. For all of us to make it out of these four years happy and healthy, we have to learn to accept that not all struggle is noble, and that happiness and health should not be ignored or sacrificed for some nebulous greater good. We must learn to listen to our pain and make room to prioritize it, even when doing so puts our chances of victory at risk.

I didn’t learn this lesson that brisk fall morning, so many years ago. That day, when I got in the water, everything everyone had said followed me off the starting block and into the water. When I caught the sense that I was falling behind, I pushed harder and harder, even as my body protested, gave in. I raced to catch up with kids who were far better than me, who had been at it longer than I had, and who knew their bodies much better than I understood mine. All I had on my side was a refusal to stop, which isn’t nearly as romantic as feel-good sports movies would have you believe.

I did not win—didn’t even place—but I remember vividly the terror of reaching for the sides of the pool and being unable to summon the strength to pull myself up, of the sudden dearth of air, and of blacking out, waking up in the car in my mother’s arms to the realization that I had done that day what we are all continually, ceaselessly told to do as human beings: my eternal, endless, goddamn best.

And I had still failed. It should have dejected me, or maybe comforted me, but instead I convinced myself that pushing through was the only way to go about anything in life.

Ironically, it was this same year that my chronic pain started, and pushing through took on an entirely separate definition. Searing, burning joint pain that lanced up me when I walked, sat, lay flat on my back, and muscle aches that kept me up for nights on end. It wasn't linked to swimming in any way that doctors could prove. I had been a “serious” swimmer for less than a year; I hadn’t ever been injured. More likely there was an underlying cause, but to me, they were inextricably joined.

The same motivation that had fueled me to compete with kids well out of my league in the pool, drove me now, in academics, at school. I ignored my body’s cries for rest, even as I subjected it to weeks of burning the midnight oil. I ignored pounding headaches to read ahead. I traveled to meets and competitions against medical advice, and my reward, shining bright after four tumultuous years of high school, was this campus.

I’m not certain why I had deluded myself into believing that this would all change when I hit university. Maybe I had never pictured college beyond a destination, but it very quickly became apparent that UChicago was its own battle. If I had been even momentarily convinced that I could relax, it dissipated. I fell back onto the familiar patterns of sacrificing my physical health for good grades, but with newfound independence, I just as rapidly eroded other elements of my life.

It is easy to skip a first meal to study for a test, and another because you don’t like the way you look compared to your peers. It is even easier to say yes to a party you have no interest in attending because you hope it’ll make you the sort of friends everyone else seems to have. And it is at once incredibly simple and endlessly difficult to cry yourself to sleep each night and go to class the next morning if all you have ever known is routine, drive, and results. If success—academic, physical, social—at the expense of yourself works out, it is confirmation that trying your hardest at all costs is a valid method. If it fails, then it seems to suggest you simply aren’t trying hard enough.

By the end of my first year, I was devastated and somehow still unaware of it. The same way a frog will remain blind to a slowly boiling pot, I had increased the pressure I’d put on myself in all parts of my life, but I’d done it so skillfully, and I was so firmly surrounded by an environment that encouraged it, that I hardly noticed until summer came, and I was forced to take the first breath I had in years.

I had only mild summer plans, a part-time job, some reading to do, and for the first time, I realized that I enjoyed this. I liked not worrying, I liked time to myself, I liked to draw and read and sleep in. I liked freedom from constant expectation and the ability to look inward and see that I was struggling in a way that was not at all conducive to a long and stable life. My physical pain had reached a tipping point, but so had my own conception of myself. I was aware suddenly that I could not go on like this, and more importantly, that I did not want to.

This is not an opinion on how to handle the trials and tribulations of college while struggling with chronic pain. My experiences are not universal, nor do I think I have dealt with them particularly well. But I want to use them to suggest a change in attitude that I believe we should all adopt—chronic conditions, hard years, and painful external situations aside. I’m not here to argue for better student wellness or a more understanding, flexible classwork schedule, although these are important points to be made in another article. Instead I want to urge us all—the keyed-up, perfectionist, high-flying, failure has-never, is-never, will-never be an option students that we are—to cut ourselves some slack.

Every student I’ve met at this university is brilliant. We are all so engaged, so intelligent, and so driven. We want to change the world or at least leave some mark of our own on it. But I want to ask, and I want you to consider how much you have sacrificed of yourself to get where you are. I want you to ask if it is always worth it to get an A if it means multiple consecutive all-nighters; if competing with your classmates to see who ate the least, drank the most coffee, took the hardest class load really makes any of us feel better about ourselves. Most importantly, I want to ask whether you are enjoying any of it. I loved to swim, but I did not enjoy coughing blood up on the sidelines. I love to learn, but not at 4 a.m., when I can feel my mind slipping away. For UChicago to truly be the transformative, vitalizing education of our lives, we have to be present to take it in.

So let go of the rope, put down your pens. It is okay to fail, and learn, or not learn. It is okay to give up, okay to surrender, and okay to ask for help. It is okay to take the day off. Treating yourself with kindness does not come easy when you have been taught to crave validation from victory, but it is vital to become familiar with your own limits, to understand that rest is not a reward but a necessity, as much a part of eventual, true success as hard work. You do not have to be continually, exceptionally flawless to be good, and perhaps, sometimes, you do not need to be good at all.

Annie Dhal is a second-year in the College.