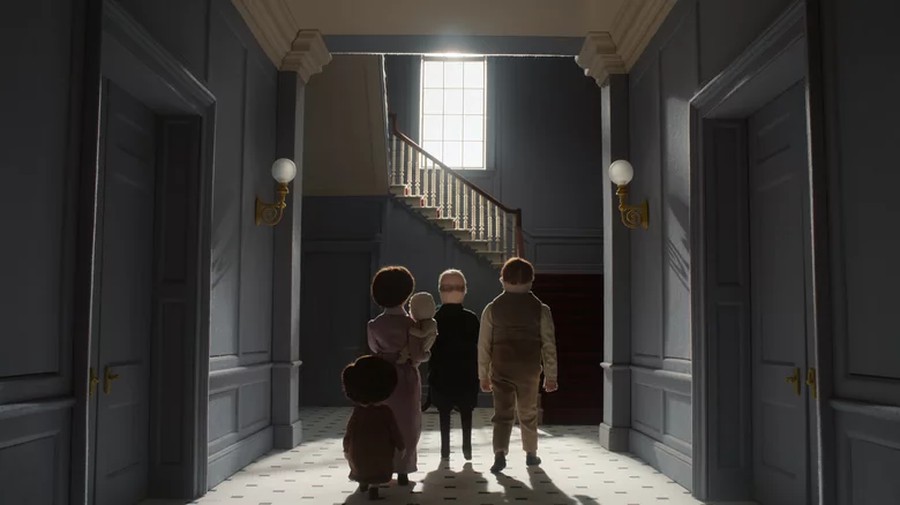 "The House" consists of three stories, all by different directors.

From the outset, it’s not hard to tell what sort of effect Netflix’s stop-motion film The House is going for. All of the first characters you see—some of the only humans in this three-story anthology—are strange-looking, uncanny, and beady-eyed. A family is preparing for a visit from their haughty relatives, and the daughter asks her father, “Are they nice people?” “No, they’re not,” he replies, firelight reflecting on his cotton face. This sort of tone is a constant throughout the three stories in this anthology, something to be either expanded upon or subverted. But if any expectations are ever subverted here, it’s only by a hair—in my opinion, this movie’s biggest flaw.

The House consists of three stories, all by different directors. The first, by Belgian directors Emma De Swaef and Marc James Roels, is about a poor family who are looked down upon by their more affluent relatives. After a particularly demeaning visit, the father (Matthew Goode) drinks himself drunk one night, leaves the house, and stumbles upon a glowing sedan chair carrying a mysterious figure. Shortly thereafter, we discover that he’s signed an agreement for him, his wife (Claudia Blakley), and their their daughters (Mia Goth as the elder and Eleanor De Swaef-Roels as the younger) to give up their own home in exchange for a lavish, new house on a hill, all to be designed by a mysterious architect. This house and its basic design are what gives the film its title, and it recurs throughout the other two stories.

The ways this story will go wrong are fairly evident from the very beginning: there’s clearly something quite wrong with the father and, with his drunkenness, this agreement will clearly come with a catch. In this sense, a lot of the story feels like it isn’t as suspenseful as it ought to be. But where the film does shine is in its small details—moments are suspenseful, even if the plot as a whole is not. Particularly, the faces of the humans in this story can become seriously unsettling as things descend further into horror, and the eerie, violin-heavy score helps immensely in making this relatively short story feel a bit grander in scope and meaning.

The second story, directed by Niki Lindroth von Bahr, is where we leave the realm of humans and enter the realm of anthropomorphic animals. Undoubtedly, what most people will think of when they first look at these models will be Wes Anderson’s Fantastic Mr. Fox and Isle of Dogs, with maybe a fair bit of influence from Laika Studio’s stop-motion creations as well. And these are very flattering comparisons. This story deals with an anthropomorphic rat (Jarvis Cocker) who is trying to renovate and eventually sell a version of the house we saw in the first story. Down on his luck, he’s been forced to lay off his construction crew and complete the remodeling himself. Things appear to be going well until he discovers an infestation of what the film calls “fur beetles,” and things progress about as well as you might expect.

The issues with this story are fairly similar to the issues with the first: how things will go wrong is pretty clear from the outset, and the film’s presentation wasn’t quite enough to keep me engaged in spite of this. On top of that, the actual theme or message that this segment is going for is more than a bit ambiguous. The first story, while predictable in similar ways, had much more sympathetic protagonists, and as a result, a plot that was much more suspenseful to follow to the end, if only to see what their fates might be. And what that story was saying about Faustian bargains and the meaning of a home, while not particularly groundbreaking, was clear enough. The second story is much more a matter of something bad simply happening to the developer, a character who … Well, I’m not totally sure what we’re meant to think about him. He’s not unsympathetic in that he’s not portrayed as a horrible person, but there’s little to attach us to the danger he finds himself in in the same way that we’re attached to the daughters in the first story. Without a doubt, there’s something here about hubris, a theme similar to that of the first story in the sense of “sometimes what you think you want might not be what’s best,” but this is definitely the story I felt the least connection with. It does have a musical number, however, which elevates it just a little in my book.

The third and final story, directed by Paloma Baeza, is the least horror-driven and, in my opinion, the most compelling of the three stories. It deals with the residents of the house in a quietly post-apocalyptic setting where “the floods” have inundated almost everything around the aforementioned house. The owner of the house, a cat named Rosa (Susan Wokoma), is renting it as a boarding house, all while trying in vain to restore it to its former glory. Her two remaining residents—after the rest left after the floods—are a shy black cat named Elias (Will Sharpe) and a hippie cat named Jen (Helena Bonham Carter). They, however, rarely pay her with money, instead usually opting to pay with fish or crystals. Soon after the start of the story, Jen’s guru friend Cosmos (Paul Kaye) arrives, throwing a wrench into the works of the existing dynamic. This story felt like it had the most to say about the titular house, and these were by far the characters I felt the most attachment to. The found family dynamic between Rosa, Elias, and Jen; the quiet mundaneness surrounding the fact that the world seems to have ended; and the striking image of the house on a hill surrounded by floodwaters—I probably could’ve watched this part on its own and considered it a really stunning short film. This final entry in the anthology had all the trappings of a well-written short story, and the way it explored a house as both a past and as a community felt very genuinely affecting and thoughtful. The visuals and lighting in this portion are also particularly striking, though I think they are less the result of the craftsmanship being any better than that the setting itself gave the artists on the production a lot more to play with. This portion, to be fair, benefits from being the last entry, as it’s the only one allowed to really draw to a close the themes the prior two entries had been exploring.

The House, without a doubt, is a gorgeously crafted film, and the amount of artisanal and technical skill on display throughout its 90-minute runtime is a feat to behold. Stop-motion is a medium that seems more and more niche as the years go by, with CGI-based animated films more dominant than ever, so it was a pleasant surprise to see this movie funded and released. However, the events of the stories themselves—with a handful of exceptions throughout—tend to fall into the old trap of somewhat predictable horror. These flaws don’t ruin the film, not by any stretch. They just left me feeling like some untapped potential may have been neglected in production.