"Witness": A Story of Refuge Denied 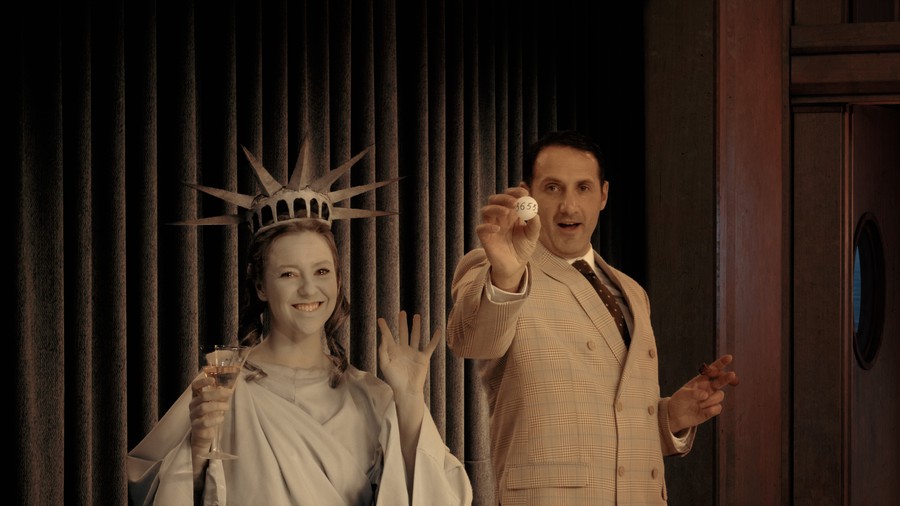 Left to right: Darya Denisova and Gene Ravvin in a scene from "Witness."

Witness, a virtual theater experience, welcomes its audience aboard the MS St. Louis to hear the stories of Jewish immigrants of the 1920s through the modern day. Witness is written by Nana Grinstein with Blair Cadden and Igor Golyak. Golyak also serves as the director. Notably, all the actors playing Jewish immigrants are themselves Jews. The history of the ship and its doomed passengers is well known; in 1939, the MS St. Louis launched from Hamburg, Germany intending to dock in Havana, Cuba. The boat carried 937 Jews, many of whom were children, fleeing the Nazis. However, Cuba turned the boat away; subsequently, the United States and England denied the boat's emergency request to dock, citing immigration quotas and bans against Jews. Ultimately, after being refused asylum, about one-third of the MS St. Louis’s passengers were murdered in the war. Witness tells their stories. At the outset of the play, as spectators, we believe ourselves to have temporarily entered the world of Jewish immigrants, but by the end, we find ourselves trapped on the boat and discover the play’s central argument and message: Jews of the past and present are still on the boat and continue to live in a state of uncertainty and precarity.

The play follows the stories of several would-be Jewish immigrants who tell their stories during a “talent show” held on the ship. All the actors are themselves Jewish immigrants. The narratives begin with the stories of Jews known to have been on the ship, many of whom recount their experience of Kristallnacht—the "Night of Broken Glass.” The young girls who call it the night of “crystal glass” say this is because they walked on broken glass. The talent show, ironically, is meant to be comical: passengers juggle, dance with their fingers, cook words (she is imagined to put the words from books in soup), and more. The stories, however, are dark. They move across time and bring spectators with them from the stories of Jews fleeing the Nazis to Jews fleeing regimes in Eastern Europe later in the 20th century. As the immigrants recount their stories, there is a bulletin of sorts that audience members can click to read more of their stories and the immigration stories of the actors who play them. Audience members are asked to keep their cameras on so that, at the end of every talent performance, they rate the performance, and their faces are projected. While my face did not make it to the screen, I felt more connected to my fellow viewers. The virtual interaction between audience and actors both obscures and seeks to overcome the real separation between them. All the while, Witness’s guide, a Russian immigrant called Emcee, assures us that all is well in America if we assimilate: “If we just assimilate…What if we just assimilate?” 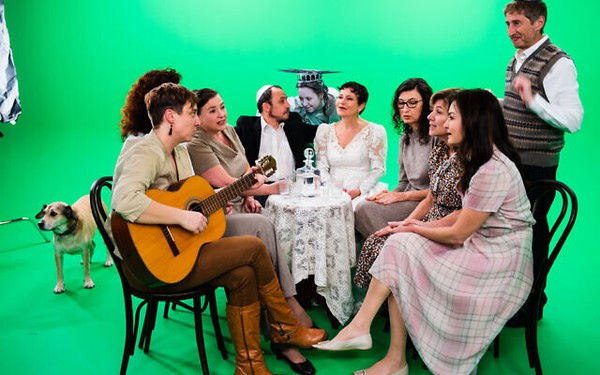 Images from the process of making "Witness" at Arlekin’s (zero-G) Lab.

Witness uses the digital form to its advantage. The sound design by Viktor Semenov allows viewers to interact directly with the performance. In one segment, audience members are instructed to turn their lights off and imagine that we are in our cabins just as the passengers are getting word that the ship has been refused permission to dock. We receive different audio in the left and right ear such that, when there is a knocking sound on our “cabin door,” it seems as though there is really someone right next to us. We hear voices praying, reading letters, and begging for permission to dock somewhere, to find safe ground.

At the very end of the performance, Emcee, who had appeared secure in his belief that his Jewishness was no longer relevant and that Jews could be secure in the world, finds himself trapped on the MS St. Louis. Again and again, he expresses his confusion: “I don’t belong here….I got a passport. I’m an American Jew. I’m from Russia, but I’m an American. I’m a Russian Jew, but I’m from America.” Emcee’s story highlights the show’s argument that Jews are always “othered”; his belief in his own integration and security was a delusion. Moreover, at the very end of the play, Emcee learns that his wife and child are also on the boat. Witness premiered just after the synagogue hostage crisis outside Dallas, Texas. That event had a clear impact on the performance; video footage from the scene of the Texas attack moved across the walls of the ship cabins. As Emcee found himself trapped with his fellow Jews, Witness’s characters began to discuss modern antisemitism and the role of Israel as videos and images flicker in the background. Lastly, characters seem to note Americans’ perceived indifference toward anti-Semitism. The Anti-Defamation League (ADL) has consistently found that in the U.S., the greatest number of religious hate crimes are committed against Jews. In 2019, the ADL saw a 12% increase from the number of anti-Semitic incidents recorded in 2018—the highest number since the ADL began its tracking in 1979. This number is also suspected to have increased due to a wave of anti-Semitism during the pandemic.

Witness places the voices of Jews from the 1930s through the present aboard a dramatized MS St. Louis as a way to ensure that the stories of real people who were sent to their death are not erased and to raise questions about the status of Jews today.