The professors were honored by the American Association for the Advancement of Science for their research and contributions to the sciences. 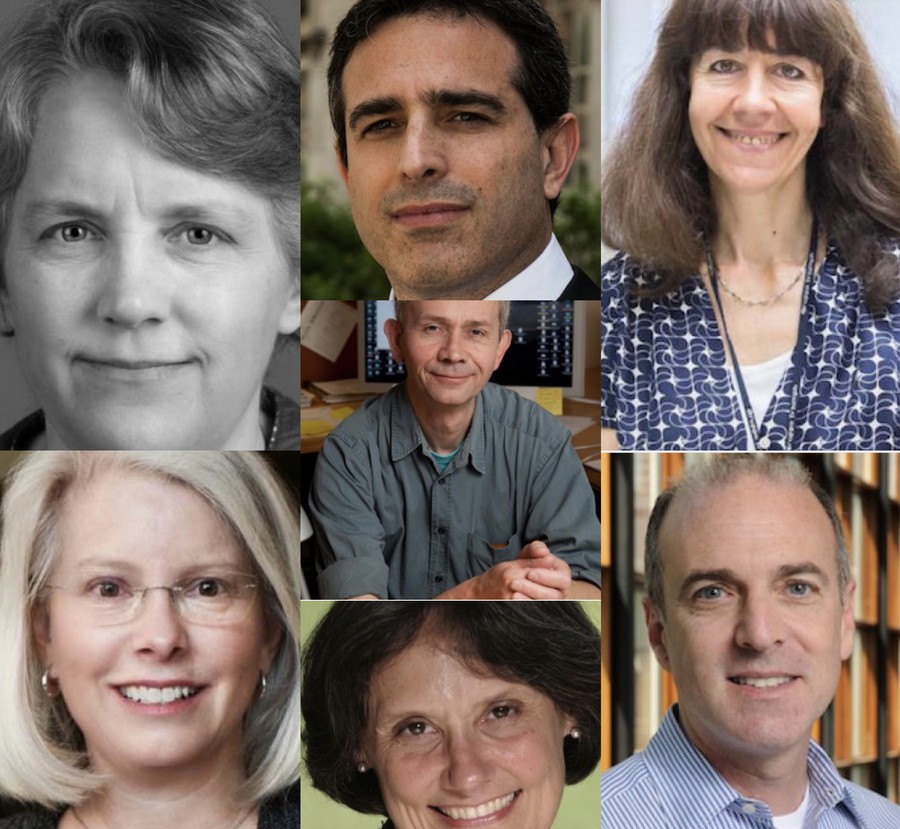 The American Association for the Advancement of Science (AAAS) is the world’s largest multidisciplinary society for the sciences and a leading publisher of research. Each year, the AAAS Council elects Fellows for their research and its applications significant to science and society. In 2021, nine UChicago professors were named AAAS Fellows.

“I think we’ve made a lot of contributions to understanding DNA rearrangement reactions from a very fundamental biochemistry point of view—how they are orchestrated and controlled,” Rice said. “For the DNA rearrangement enzymes I’m working on now, one of my hopes is that people can use the tools we’re developing to get microbes to make biofuels, which will be very useful to the planet.”

Rice  prizes the laboratory work involved in her research. “I find [the laboratory work] amazing—it shows the intricacies of how Mother Nature pulls things off,” Rice said. “To some degree, I view it almost as art. It’s showing people how beautiful nature is even at the tiny level.”

In the study of protein structures, there has been a recent revolution in artificial intelligence methods. “Within the last year, artificial intelligence methods have gotten very good at looking at enormous databases of protein structures and sequences and then taking a new sequence and guessing the structure,” Rice said. “We can make predictions that give you testable hypotheses…without even having to lift a pipette.”

Amanda Woodward, Dean of the Division of the Social Sciences and the William S. Gray Distinguished Service Professor of Psychology, is a founding member of UChicago’s Center for Early Childhood Research. As a developmental psychologist, Woodward studies how infants make sense of other people's actions and interactions. “Human beings are really intensely social species,” Woodward said. “So understanding who we are as thinkers, reasoners, and learners sort of depends on understanding how we react to the social context.”

Woodward’s most highly cited paper was published in 1998; it details her discovery that infants are able to recognize the difference between object and human movements and see the latter as goal-directed. “It established a whole program of research in my lab and also inspired a lot of research around the world,” Woodward said.

This was followed by another discovery that babies’ reasoning about other people’s behavior is directly connected with their motor development. Woodward’s lab found that the baby’s own ability to use tools predicted how they were going to reason about other people’s actions and abilities.

“During my lifetime, there have been really important discoveries in this field that have shaped what we know about the human mind and its development, so that makes it exciting to be in science and part of that discovery process. That’s what motivates my work,” Woodward said.

One of the current projects that his lab is working on involves developing a new cell culture model using an in vitro system, which will allow them to characterize environmental interactions with human genomes during early development. “If we're correct about the potential of this new system, then I believe that it can truly change the amount of insight we can have into patients' risk and response to medication,” Gilad said. “It can even help with developing new medicine by testing it much more rapidly in the lab before going through testing phases.”

Gilad’s interest in this area was largely inspired by his study of olfaction while in pursuit of his doctorate degree. “Through my work on olfaction, I became very interested not just in the different ways that we can smell things, but just in general the relationship between genes, environment, and our phenotypic differences,” Gilad said. “Over the last decade or so, I became interested in how we can use these tools to actually make an impact in the health system and in the clinic.”

One of the most significant discoveries made by Gilad and his lab has been in the area of gene regulation and variation, where they produced one of the first maps to track rotary mechanisms. Another significant discovery comes from Gilad’s work in comparative genomics; Gilad and his team established the first panel of chimpanzee stem cells, which they now freely share with other scientists. “I'm very proud that there are dozens of papers that are not from our lab, but use our cells, the resources that we developed, to really enhance that field,” Gilad said.

Michael Coates is a Professor of Organismal Biology and Anatomy whose research focuses on early vertebrate diversity and evolution. He is most interested in discovering morphology, the origin and form that underlies vertebrate body parts, using fossils to look at the early radiation of modern vertebrate groups. Coates works primarily with fish, and collaborates closely with fish labs that look at the developmental biology side of fish.

One of Coates’s biggest accomplishments was discovering the earliest limbs with digits in his postdoctoral work. Coates and his colleagues found that the number of digits varied, as opposed to the widely accepted standard number of five digits. Although Coates has made several discoveries and contributions to the field of morphology, he continues to be fascinated by fundamental questions regarding the genetic path to morphology and what this means in the context of how genes and development have changed throughout time, as well as how this process has been shaped by the history of the planet. “It's clear that there are big, big gaps in the early record of vertebrate life. I'd love to see those filled, and we have gotten better tools for this imaging and making sense of it.”

Jeanne C. Marsh is the George Herbert Jones Distinguished Service Professor in the Crown Family School of Social Work, Policy, and Practice and the Director of the Center for Health Administration Studies. Marsh’s work focuses on health services research that looks at the integration of health and social services.

Currently, Marsh is focusing on the health disparities area; her team is studying the impact of substance abuse treatment on client functioning, specifically in women and children. One of the studies that she is leading is a study in Los Angeles County on the opioid epidemic. They are looking closely at not only gender disparities, but also race and ethnic disparities and how they can help improve access to treatment for these marginalized populations.

“I think one hallmark of my work is a sense that we really need to do whatever data collection is necessary to hear directly from the people who are in the real world experiencing these issues,” Marsh said. “It isn't good enough just to pick up a big data set and run some analysis, it's really important to get the perspective of the people who are engaged in the process, who may be receiving the services.”

One of the most significant parts of Marsh’s research has been becoming increasingly aware of health disparities which stem from broader social inequities. “Findings from my research show that targeting health and social services to specific client needs significantly improves their health and social functioning,” Marsh said. “I bring a social work perspective to this research indicating that asking clients what health and social services they need– and then providing them– improves client outcome and satisfaction when compared to alternative approaches.”

Marsh is also taking part in a new project that involves faculty members from both the Department of Medicine and the Crown Family School. They are primarily interested in health care for the disadvantaged, specifically in Medicare and Medicaid data. “That's really the exciting part about science, when you can work together with really smart people in the process of discovery, addressing whatever your curiosity might be.”

Professor of Medicine Maria-Luisa Alegre’s research focuses on the molecular mechanisms involved in organ transplants. One area is centered around tolerance, while the other is centered on studying the impact of different environmental factors, specifically microbiota.

Currently, Alegre and her team are working with mice to explore how the immune response is altered by the gut microbiota. Their goal is to answer the question of how the microbiota that colonizes the transplanted organ itself influences the immune response to that organ and the commensals that colonize the organ. They are also working on figuring out what components of the immune system are being awakened to reject the organ when challenges that can threaten tolerance arise, such as severe infections.

Her goal for her research ultimately goes back to making an impact in the clinic. “We would like to get to a point where we understand the mechanisms that underlie transplantation tolerance well enough that we could translate that into the clinic and be able to follow and monitor the cells of patients who are transplanted,” Alegre said.

Edward Blucher is a Professor of Physics whose research focuses on particle physics. His studies center around exploring the imbalance that built up in the first millionth of a second or so during the Big Bang. “Almost everything I have been studying is broadly connected by one big physics question, which is trying to better understand what happened early in the universe between matter and antimatter.”

One of Blucher’s most significant discoveries was on symmetry violation. “We were looking for a very particular kind of violation in the way that a kaon decayed. In 1999, we finally found that this symmetry violation existed. It was very exciting because this was the kind of thing that would be needed for the universe to evolve the way it had existed in nature,” Blucher said.

Blucher then developed an interest in neutrinos and their role in how the universe evolved to be imbalanced in matter and antimatter, and this is when DUNE was started. DUNE is an experiment that involved about 1400 physicists from 35 countries. It focused on looking for a violation of this matter and antimatter asymmetry in neutrinos by sending a beam of particles of neutrinos from Fermilab all the way to South Dakota.

Blucher is now working on an experiment that is also deep underground in a mine in northern Ontario that is looking at a rare type of nuclear decay. “I think that asking about asymmetry is just a fascinating question, because it's something that we wouldn't be here without,” Blucher said. “It's a question that's really connected with how matter exists at all.”