"King James" Review: A Meditation on Friendship, Race, and Basketball 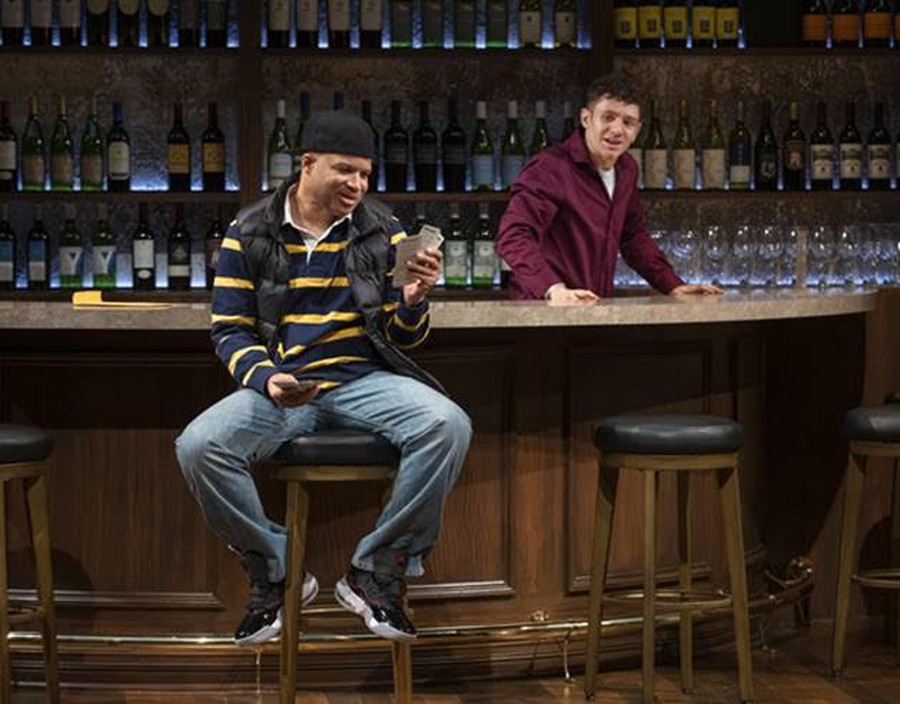 A confession: I have never been particularly fond of sports. I’d imagine this is a more common sentiment at the University of Chicago than at our peer institutions, but I still felt like a bit of an impostor when I arrived at the press showing of King James, the latest original production from Lincoln Park’s acclaimed Steppenwolf Theatre Company.

Having seen only the title and billing, I had presumed the show would follow the “career and legacy” of an all-time basketball great, “King” LeBron James. Of course, this was not the case. King James, written by Steppenwolf ensemble member Rajiv Joseph, is a two-man show—but neither of those men are the King. Matt (Chris Perfetti) is a Cleveland native trying to sell his season tickets to the Cavaliers during James’s rookie year (Matt has debts to cover); Sean (Glenn Davis) is a fellow Clevelander who's looking to buy the tickets after coming into an unexpected windfall (he has just sold his first short story).

This is how the story begins. In four parts, each coinciding with a pivotal moment in James’s career, we catch a peek of Sean and Matt’s complicated friendship—one premised on a shared love for basketball yet holding, inevitably, a profound influence over both men’s families and careers.

Never is James on stage. No basketballs are shot, although crumpled-up newspapers are occasionally launched into plastic waste bins. The audience, however, never forgets that they are watching a play about basketball. Perfetti and Davis crack basketball-related jokes that raise laughter from a distinctly male portion of the audience; they throw around two generations of basketball knowledge in a parlance that can be difficult to follow.

But the focus of the play—rather, its thematic core—is not basketball. Instead, the play follows the life cycle of an imperfect friendship. The two characters suffer from a conflict of perspectives. Matt is white and from an upper-middle-class background. He is prone to lecturing about the “problems of America,” which, as given, are largely asinine and played up for comedic effect. Sean is Black; his family struggled and penny-pinched to send him to Catholic school. At the start of the play, he says that the Cavs carried him through a difficult childhood, yet he has never seen them play live.

The two are men of unique temperaments. Matt is entitled and unthinking, although often well-meaning. Sean is withdrawn and slow to forgive, but only because he lacks Matt’s delusions about what it takes to succeed in America. That the two characters stand united in their love of basketball does not prevent conflict but drives them toward it.

At one point, James has announced a return to the Cleveland Cavaliers, his first team, which he left unceremoniously. Matt remarks that James should have “known his place” when he left for the Miami Heat four years prior. For Sean, the language is coded: The Black player should have been loyal to the fans who launched his career instead of seeking to expand his prospects. Sean, then working for Matt’s parents, can’t help but feel as though Matt believes he, too, should forgo ambition in favor of gratitude. It’s in these tense little moments, when conversations about life and basketball tumble into microaggressions, that the audience sees the full breadth of the chasm between Sean and Matt’s perspectives.

But these moments are also where the play stumbles. It’s obvious to the audience that “knowing one’s place” is coded language, and many of Matt’s tactless comments are similarly blatant. Sean replies with “What do you mean by that?” and Matt, in a uniquely unoriginal turn, dodges the question. The play is trapped in a formulaic exchange. The takeaways, especially for an audience as liberal as Steppenwolf’s, are culturally redundant rather than innovative: Think before you speak. Consider your privilege. Don’t rely on your Black friends to educate you.

These messages are relevant, just not revelatory. Steppenwolf’s previous production, Bug, was engaged in its own anti-racist dialogue too. But in reimagining a 15-year-old script about paranoia, government, and bodily autonomy with a Black lead, it put the role of the institution, not the individual, at the forefront of the perpetuation of racist systems. King James does the opposite, and it suffers as a consequence. It feels narrow in its scope. The commentary is almost trite.

It’s under the pressure of Matt’s insensitivities that his relationship with Sean crumbles. Ultimately, the audience is left to question whether shared admiration for sports alone is enough to forge a lasting friendship. While this may be a meaningful question for some, it’s one that I—as someone who has never had much care for sports—have to recontextualize. Is any shared passion or interest strong enough to maintain a friendship polarized by disparate worldviews?

It is in this consideration of friendship that King James ultimately succeeds. In its last moments, with a buzzer-beating scene that I will not spoil, the play offers a hesitantly optimistic answer to the question it poses about friendship—one whose emotional resonance thoroughly surprised me. Walking into a play unashamedly about sports, I had not anticipated the need for tissues.

"King James" played from March 3 through April 10 at the Steppenwolf Theatre in Lincoln Park.