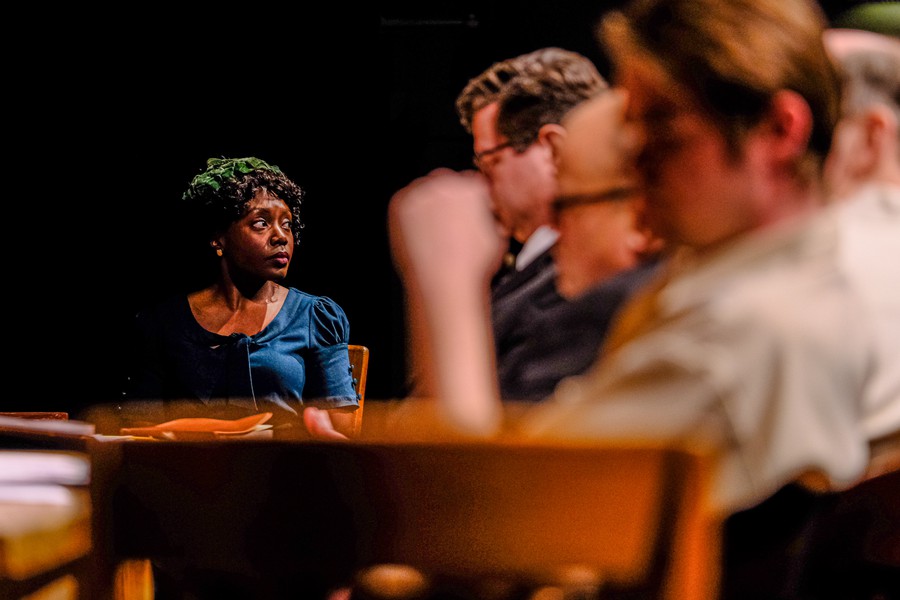 Adia Alli (left) portrayed Mamie Till-Mobley in Collaboraction’s "Trial in the Delta: The Murder of Emmett Till."

The murder of 14-year-old Emmett Till in 1955 is a story usually glossed over in high school history classes, summarized as an act of racial violence that sparked an upsurge of activism and resistance during the dawn of the Civil Rights Movement. While this holds true, the outrage and heartbreak intertwined with the crime are often largely overlooked. Collaboraction Theatre Company and the DuSable Museum of African American History sought to change this through Trial in the Delta: The Murder of Emmett Till, the first-ever stage adaptation of the authentic, recently discovered transcript of the trial of Roy Bryant and J.W. Milam, the two men found not guilty of murdering Emmett Till.

The docudrama-style show was designed to be an immersive experience attempting to recreate the 1955 Mississippi courtroom in which the trial of Emmett Till’s murderers took place. During the show, the audience co-mingled with witnesses for the defense, prosecution, and other family members in the courtroom setting. The stage was set up with a walkway for witnesses to move directly back and forth between the audience and the podium as the court proceedings were reenacted.

All of the actors and actresses were phenomenal. They approached a very difficult topic with professionalism while staying in character before, during, and after the show. They each portrayed their character to a tee, even down to the way they sat in their chairs on stage. Before the show even started, Tyler Burke (who played Roy Bryant) sat back in his chair, stretching his arms and yawning to show his nonchalant attitude towards the trial at hand. Small actions like this really came together to bring the courtroom to life.

Though all the actors and actresses deserve a shoutout, Adia Alli as Mamie Till-Mobley, Emmett Till’s mother, delivered a standout performance. You could see the pain that engulfed her entire body throughout the trial from start to finish. From the moment I walked into the theater, I was immediately drawn toward her figure, sitting alone on one corner of the stage, hands wringing nervously as she stared into space and seemed to occasionally whisper to herself. Her testimony was especially powerful—a single Black woman identifying her son’s body in front of an all-white panel. She stood her ground and did not allow the aggressive questioning of defense attorney J.J. Breland, played by Steve Silver, to affect her. Grief-stricken but poised, Alli’s performance was truly heart-wrenching, and the way that she touched the entire audience was unmistakable.

Darren Jones, who played Emmett Till’s great-uncle Mose Wright, also gave a standout performance. One of the most monumental parts of the show, and the history of the Till trial, was when Wright was asked to point out Emmett Till’s murderers, Roy Bryant and J.W. 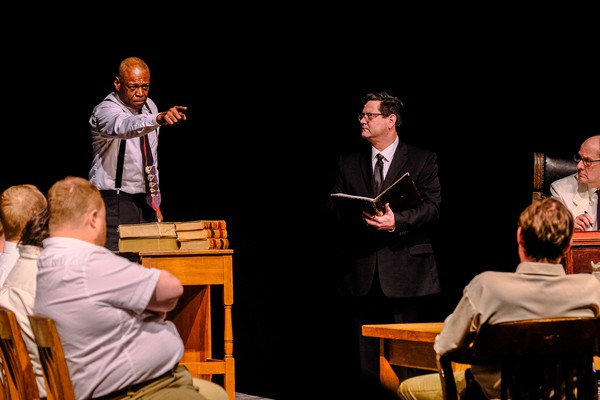 One of the most monumental parts of the show, and the history of the Till trial, was when Wright was asked to point out Emmett Till’s murderers, Roy Bryant and J.W.

Milam, during the trial. Eyes wide with fear, he slowly raised his trembling finger and held it, suspended in the air, pointing straight at the two men seated almost directly in front of him. His anguish and terror were palpable through his facial expressions and body language, captivating the audience as he testified in front of a stage full of white men. The courage it must have taken for Wright to defy all odds and stand up there was evident; as he descended from the stage and walked right past me to his seat in the audience, you could almost see the beads of sweat on his face. I continued to glance at Jones every once in a while throughout the performance, and he maintained a tense look of painful concern the entire time. Wright’s testimony will continue to be cemented in history as one of the bravest moments of the Civil Rights Movement, and I think Jones truly did it justice.

What also really struck me were the little details that contributed to the overall accuracy of the reenactment. For instance, the courtroom had two separate bibles used to swear in the white and Black witnesses during the trial. There was also a particular emphasis on the Black and white members not touching each other; at one point, one of the Black witnesses stood next to the walkway waiting for the white witness to pass before proceeding onto the stage. These details made the atmosphere of a courtroom set in 1955 much more vivid.

The most compelling part of the entire performance had to be the ending: Alli stepped out into the spotlight with the rest of the cast behind her as the lighting turned a deep blue color. Then, voice slightly quavering with emotion, she read out the names of Black Americans murdered after Emmett Till. The theater was completely silent for several moments, then everyone rose in a standing ovation. An audience member near me said, “How many more?”

How many more? That is the question we were left with after watching Trial in the Delta. The adaptation of the trial’s transcript shed light on a heinous act of racial violence and injustice that holds even greater implications in today’s context and that, frankly, not enough people are aware of or care enough about.

After the performance, the audience members continued to explore these issues through a “Crucial Conversation” hosted by Marcus Robinson, co-director of Enrich Chicago, a collaborative organization committed to ending systemic racism in the arts sector. I found this part of the event particularly insightful. The audience was extremely diverse; there were people from all over the country, of all ages and races. Yet when each volunteer shared their reflections on the performance and overall experience, the snaps, murmurs, shouts, and even tears of agreement that followed created a unique sense of unity and community. People talked about how the experience impacted them personally; one audience member described how it felt being alive and living in Mississippi at the time of Emmett Till’s murder. Another even had ties to someone who had attended his funeral. Young students discussed how they had never heard of Emmett Till’s murder, and others talked about how we are still living in the same world of injustices today. I have truly never felt more shocked and heavy-hearted, but also more empowered, than during that open conversation.

The creative team, including co-directors Anthony Moseley and Dana N. Anderson, and co-adaptors G. Riley Mills and Willie Round, did an amazing job of portraying an accurate account of one of the most significant failures of the U.S. legal system in the 20th century. This whole event was extremely eye-opening, and I hope that Collaboraction Theater Company and the DuSable Museum of African American History continue to present and host powerful theater productions that seek to explore critical issues and promote change.