“When There Are Nine”: A Memorialization in Bad Taste 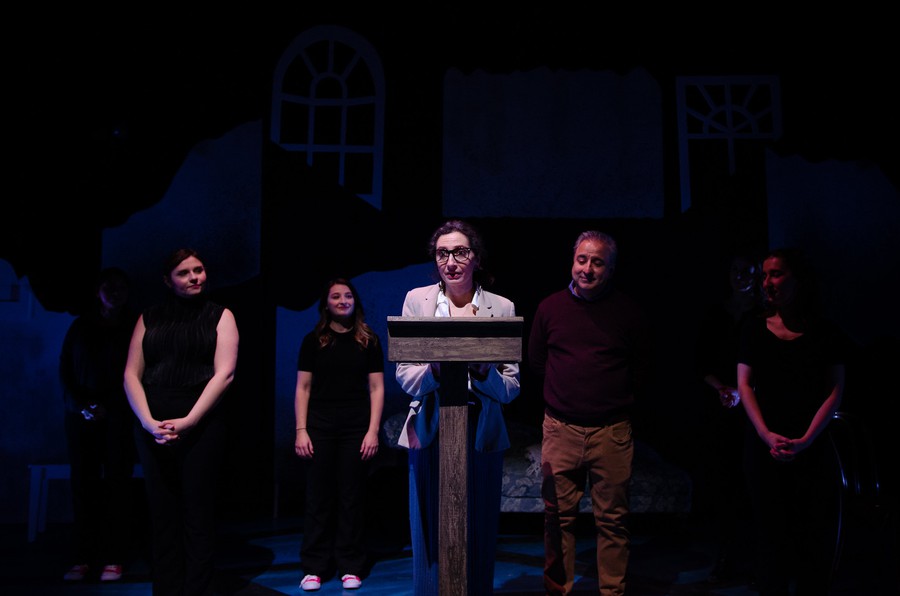 Members of the cast of "When There Are Nine."

When There Are Nine, which played at the Pride Arts Center through March 13, is a 90-minute play that takes place in the mind of late Supreme Court Justice Ruth Bader Ginsburg (RBG). The setting of the takes place mere hours before the death of Ginsburg as the audience watches her reflect upon what the playwright, Sally Deering, deemed the important moments in her life. Though the premise of the show could have been interesting, I felt the show utterly failed to achieve its goal of memorializing the late, great justice. The play didn’t even touch upon some of the most pivotal moments in Ginsburg’s life and created a truly unrealistic picture of her achievements. The show itself felt poorly written with very few redeeming acting and staging qualities. In fact, many lines of dialogue in the show felt silly.

One of the first scenes in the show involves young Ginsburg and her dying mother in Brooklyn, NY. Her mother seems to be pressed for time and in pain as she tells her daughter life advice before her ultimate death. The scene felt a bit ridiculous—at one moment, Ginsburg’s mother was fine, and the next moment, it was as if she was going to die right there. If the playwright wanted to reflect upon a moment when Ginsburg’s mother might act like this, it would have made more sense to actually show Ginsburg’s mother on her deathbed. Many of Ginsburg’s showcased memories felt rushed, unnecessary, and lacked motivation.

Another unrealistic portrayal I must reference is the moment when feminist activists are shown rallying against Ginsburg’s decision on the Roe v. Wade case. Ginsburg begins speaking to the women, and, all of a sudden, they are no longer upset with her. This was a 30-second speech that was not a real speech given by Justice Ginsburg, simplified her views, and was not very well executed on stage. That’s not realistic. In what world do upset feminists suddenly calm down when their political views are shot down just because Justice Ginsburg has spoken to them? It was frustrating to watch women with strong, vocal opinions be so easily appeased in this very short scene. It makes it seem as though many women just protest and hold strong views for “fun” and not because they are adamant in what they want. I wish there was more nuance given to these moments. Perhaps we could have had a scene in which there was a real, educated conversation between the justice and these women so we could understand RBG’s thinking and persuasive attitude. The playwright tried to make Ginsburg out to be this perfect progressive politician and even changed some of her actual political views just so she could paint out the late justice as a perfect saint. These moments did not feel true to Ginsburg’s reality.

Ginsburg herself had little characterization. The show painted her as a sort of political saint, but I could not detect any real character development or tangible motivation in her portrayed personality. Ginsburg was a real human. She was more than just some political matriarch; that idea felt lost in When There Are Nine. The actress, Talia Langman, was fine, and she gave an exciting and interesting performance especially with the script given to her, although her Brooklyn accent deteriorated throughout the show.

When it came to dialogue, there were, again, ridiculous moments. At one point, Marty Ginsburg tells Ruth, “you’re Brooklyn, baby,” which just didn’t make any sense. At another point, there was a monologue by Ginsburg’s nurse that was meant to be heartfelt, but the writing style made it impossible to feel any remorse for the characters. If the playwright wanted to create realistic dialogue, they failed completely. I felt little emotion besides second-hand embarrassment throughout the viewing.

Though I know little about the playwright’s religious affiliations, I, as a Jewish woman, felt a bit uncomfortable with the pushing of Ginsburg’s religion onto the show. Ginsburg was a strong and proud Jewish woman, but the show constantly used religious references and worked to remind the audience of Ginsburg’s Judaism in every moment it could. This was one of Ginsburg’s few characterizations and it was not well-done. I felt that the references to the Jewish religion used were very surface-level and didn’t have any strong spiritual relevance to Ginsburg’s life work. It felt as though the playwright was trying to throw in references whenever she could, but there was not one religious theme that emerged as the main focus. The show referenced Passover, Rosh Hashana, and the ideas of the pious. The religious themes were just all over the place.