& They Threw a Party 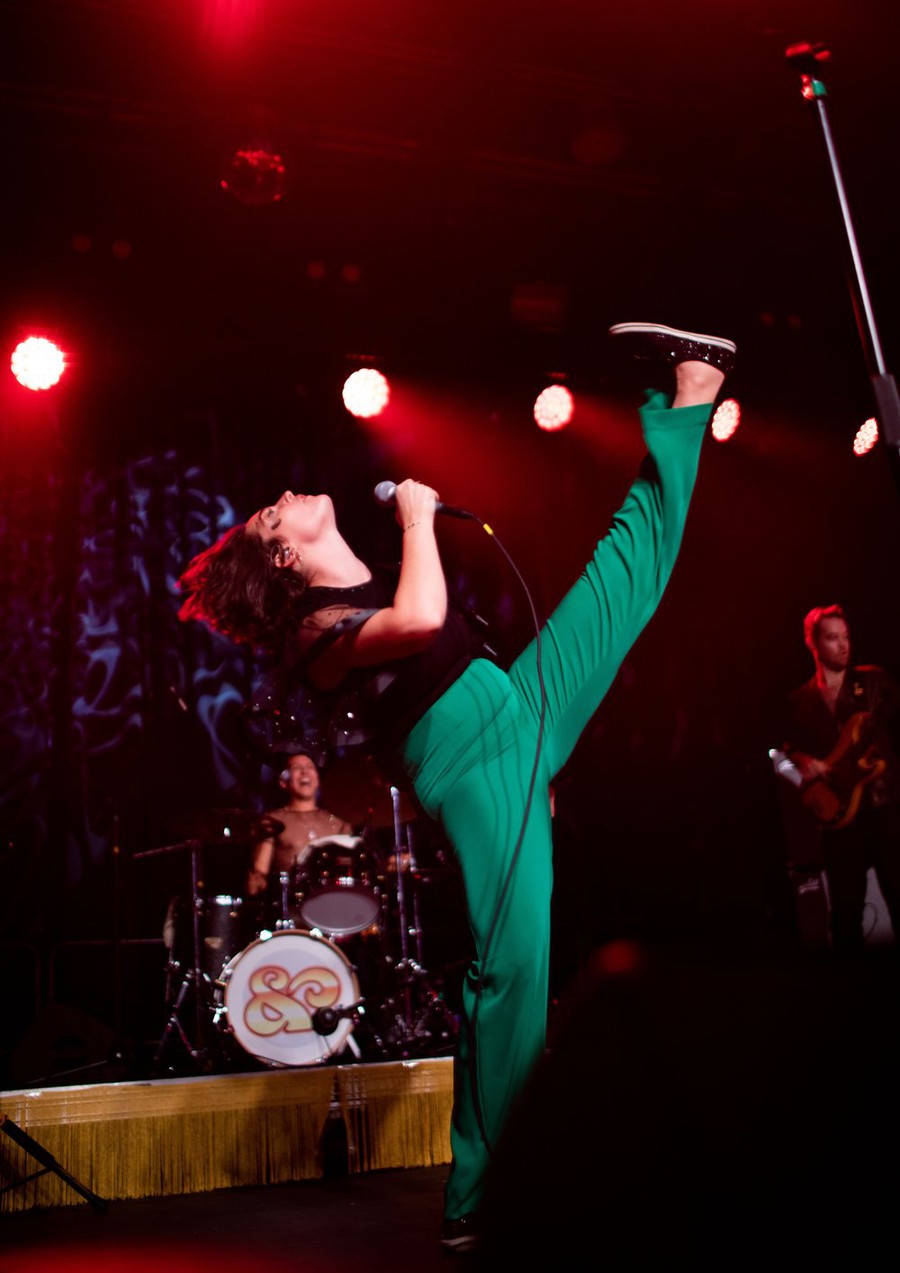 Sammy Rae & The Friends are a big, energetic act.

The line curved around the block in a yawning shape—now that I think deeply about it—vaguely reminiscent of a saxophone’s bend. In the rain, I walked past the stretching mass and tripped on nothing, nearly falling. Four to six hands flew out to catch me, and the concerned faces attached asked if I was alright.

When the back of the line became the front of the line, we were greeted with signs reading, “Be kind. Mask recommended.” My ticket was at will call (Thanks, Sammy), one of only a few it seemed. When I gave my name, the ticket agent said, “Ah, I remember writing that,” and flipped over a piece of paper with no more than six names scrawled in blue pen. She crossed mine out.

Sammy Rae & The Friends are a big, energetic act. Crowds, it seems, descend on their shows. There’s an intimacy afforded by this middle ground between underground and stardom, and it’s lovely. Behind me, someone told the ticket-taker he didn’t have a ticket but was from Connecticut, like Sammy. I’m pretty sure I saw him let in.

A small venue loaded with tight spaces, The Metro, only emphasized this intimacy. To get to the stage floor you walk up two flights of tiled stairs. There you’ll find a dance floor with three entranceways, absolutely jam-packed. Con Brio, the opening act, was well into their set when I emerged on this floor, and my God, were they a party.

Much like Sammy Rae & The Friends, Con Brio brings big band energy. They stood six, maybe seven or eight—their number elusive, more like one surging body with many moving parts—on stage: trumpets, guitars, saxophones, and one hell of a vocalist. Never before have I seen an opening act that so evenly matched the main performers. During their last song, the saxophonist dropped his instrument and sprinted around the stage as a hype man for each soloing member. He got on his knees and feigned weeping while the zip-up-hoodie-wearing guitarist played above his own head and the vocalist let out one final note, going higher and higher and…

Then a quiet between Con Brio’s exit and The Friends’ entrance. I went to the balcony and found some friendly faces along the railing who let me watch over their shoulders.

And Sammy burst onto stage, followed by the Friends. She dance-stepped to a keyboard and sang, “Be good to those around you, be good to yourselves, and have a damn good time,” before falling right into “Follow Me Like the Moon,” the titular song of the tour itself. The balcony and the dance floor, much like with Con Brio earlier, melted into one body with so many moving parts. One giant, thumping, stepping, swaying, singing, loving body.

The evening went on like this without a break in the music. This is, I think, one of the truly special things about Sammy Rae & The Friends: they breathe music. After I interviewed Sammy, I remember telling a friend how everything she said had a rhythm to it, that everything she said sounded like a song; she is so practiced that song permeates even the cadence of her speech. During the show, she literally sang between songs; a simple “How is everybody tonight?” became something so melodic, I’d put it on any playlist.

The way the group moved mirrored this rhythmic mode of life. Sammy high-kicked about the stage, fell to her back to belt high notes (which, my god that’s difficult—seriously, lay on the floor for a moment and try to sing, let alone sing well and loudly enough to be heard by such a packed room—hats off), and jumped around in way that expressed nothing but pure joy. The only moment anyone on stage was still came during the performance of “Living Room Floor,” when everyone gathered with their instruments on a cushion-filled blanket and snuggled up next to one another. It was adorable.

The night was a blur of community punctuated by Sammy’s introductions of The Friends, a masterful cover of the band Chicago’s hit “25 or 6 to 4” (which maybe 60 percent of the crowd was too young to know, but hollered along with the elder constituents nonetheless), and an insistence on being and and and and and and and.

At the close, Sammy sang out, “We don’t have time to walk off stage and walk back on, so we’re going to do an encore now,” and The Friends exploded into “Let’s Throw a Party!” Drinks were spilled, feet were stepped on, and bodies collided jumping up and down.

That’s the image of the night stuck in my head, all of us friends now, together, partying as hard as we could before parting.