This is the first time in program history that UChicago has made it to the national final round. 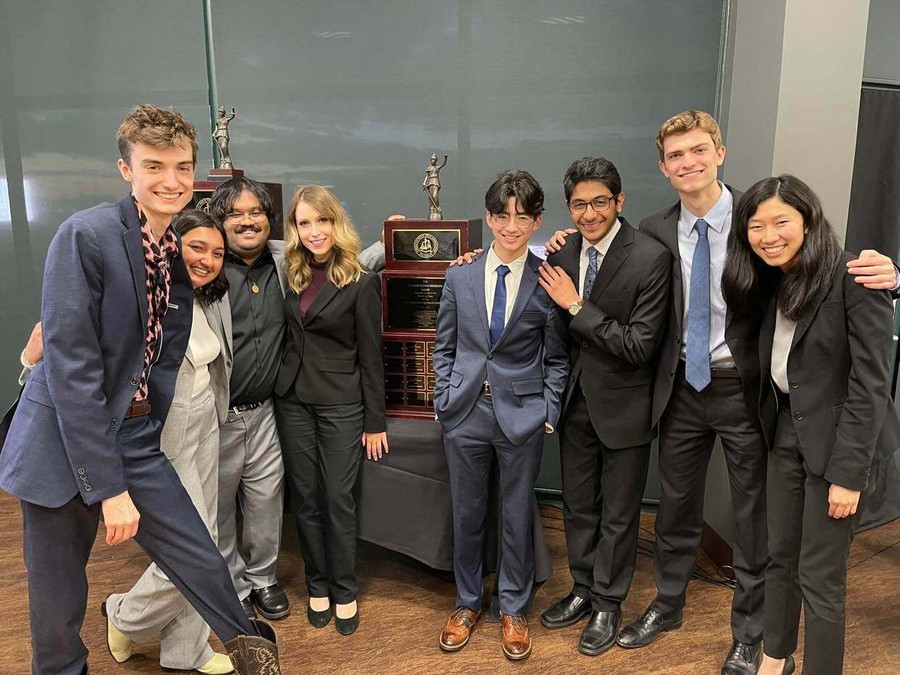 The UChicago mock trial A team finished runner-up at the 37th American Mock Trial Association (AMTA) National Championship Tournament (NCT), which was held from April 8–10 in Lancaster, PA, at Elizabethtown College. Chicago B also competed at the NCT, making this the second year in a row that both teams earned a bid to the tournament.

Mock trial is a competition where students engage in trial simulations with teams from other institutions using a fictional civil or criminal case from the AMTA, which is always based in the imaginary state of Midlands. Each team has attorneys and witnesses, and teams prepare both sides of the case for every competition.

“The point of mock trial is not really about whether prosecution or defense wins, it’s about putting on the best case theory, how well you can argue, and how the witnesses can play up the character,” said first-year Anushka Somani, who serves as a witness on the team.

Chicago A won their division for the first time in UChicago history with a record of 11–1. They were then handed a tough loss by Harvard University in an intense final round. All competitors in the national final round were named “All-Americans,” which is the highest individual award given. Chicago B did not place in their division, but fourth-year attorney and mock trial program president Roma Shah earned an All-American attorney award.

After qualifying for the NCT, the teams only had two weeks to prepare for the official NCT case; this year, it was the State of Midlands v. Jean Riggs, a criminal case on a potential conspiracy in a police department surrounding embezzlement of money and drugs. Before that, mock trial teams across the nation had spent the year preparing and competing on a different case from the AMTA; this year, the case was the State of Midlands v. Dakota Sutcliffe on the reversal of a felony murder rule that was voted unconstitutional.

“There is a big difference between having an entire year to prepare a case versus competing against the best teams in the country with only two weeks to do the same,” said Juliana Mothersbaugh, co-captain and second-year witness on the team.

Competitions are judged by practicing lawyers, and the AMTA also assigns lawyers to coach each team. The head coach for UChicago was Samuel Jahangir, a litigation associate at the Chicago office of Jenner & Block LLP, along with assistant coaches J. T. Gwozdz and Caroline Veniero. “We’re a very student-driven program, but it is also great to have coaches to consult with when we need advice or more direct help,” said Ellen Guerra, a fourth-year attorney and Vice President of Administration for the program.

The teams traveled to various tournaments around the nation competing in invitationals throughout the year, one of which, the Great Chicago Fire Invitational, was hosted by UChicago via Zoom. This tournament is known to be one of the most competitive in the nation, with teams from schools such as Stanford, Yale, Massachusetts Institute of Technology, and the University of California, Berkeley, in attendance. Chicago A defended home turf, finishing in first place with a record of 7–1.

“It can often feel like an individual activity because each person is scored individually on their components. But we always like to stress as a program how much of a team activity it really is, and how the performance of one person can affect the entire team’s performance,” Guerra said.

Mock trial has been heavily affected by the pandemic in the past two years. This year the sudden spike in COVID-19 cases in February caused their Regional Tournament, the first round of the AMTA national tournament structure, to be moved online. “You don’t get that same immersiveness in the courtroom when you’re sitting in front of the screen for three hours,” said Ali Alekri, a third-year witness and attorney on the team.

By mid-March, the Open Round Championship Series (ORCS), the second round of the AMTA tournament structure, was able to be held in person. Both teams traveled to Cedar Rapids, IA, where Chicago A placed second and Chicago B placed third, earning both teams bids to the NCT.

“One of the best parts of in-person tournaments is traveling…for ORCS we all stayed in the same hotel and got to do a lot of fun things,” Somani said. “Being able to bond outside of mock allows you to create friendships that are developed in a competitive activity but get to be continued outside of it.”

They have also been able to meet and connect with other teams at these competitions, forming friendly rivalries in the process. “It’s a pretty tight-knit circle; people are crazy in the same way. People will usually compete at the same tournaments from the same circuits, and you get to know other teams,” said Ethan Hsi, fourth-year co-captain and attorney.

Hsi said that the creativity of UChicago Mock Trial sets them apart from other teams. “A lot of teams rely on a very clean and professional performance. While we also strive to be professional, we’re always like a little bit weird.”

This was the most successful season in program history, and the team greatly attributes it to their genuine camaraderie.  “One of my favorite things [about the mock trial program] is just how many awesome people I have met, they’re all people I have learned to love and respect,” Somani said. “I’ve met some of my closest friends and it’s just a really great experience because we have a very strong friendship.”