The Mesmeric and Complex Beauty of Yeesookyung’s "Translated Vase" 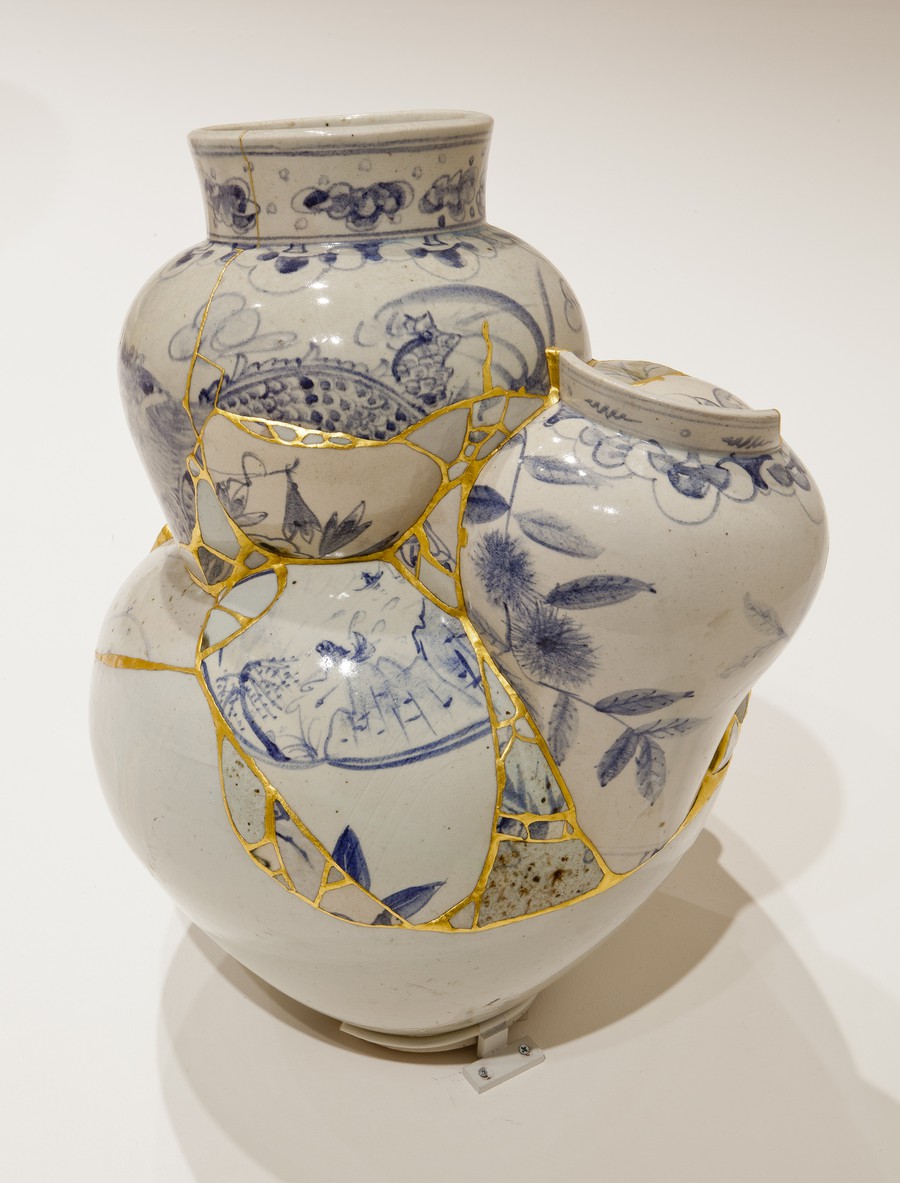 Julian Stern is employed by the Smart Museum, though has no connection the artist, financially, personally, or otherwise.

Salvaged from several South Korean kilns, the fragments of pottery that form this piece were discarded by ceramic masters as imperfect replicas of Goryeo (918–1392) celadons and Joseon (1392–1897) white porcelains. With them, the Korean contemporary artist Yeesookyung—perhaps inspired by the Japanese practice of kintsugi or perhaps playing on the homonymic relationship between the Korean words for “crack” and “gold”—created a form beautiful unto itself.

Translated Vase sits like a massive tumor on its pedestal, unprotected by glass, bulging out into the space of the gallery. It is in places smooth and convex and delicate like an egg. And in others, around the ribbons of gold which unite the various shards of pottery, it is jagged and splintered. Under a glossy sheen, painted motifs—some animalistic, some foliaceous, some geometric, all blue—intermingle across sections, giving the work a sense of cohesion and oneness, despite its fractal nature. At the mouth, the vessel is closed off; it’s not much of a vessel at all.

It was Sunday, two days before the exhibition opened, when I first saw it in the round, my first formal introduction to Yeesookyung and her work. I was lurking about the Smart as part of my gallery attendant duties: observing the installation process, reading a bit from a book I’d brought, occasionally ushering a student from the lobby to the educational study room. I didn’t even know there was to be a porcelain show. I was under the impression that Bob Thompson: This House Is Mine was to occupy the whole museum. And then I turned a corner of the freshly erected walls and happened upon something entirely unexpected.

Two members of the installation committee were hoisting an irregular, protuberant form, all shimmering blue, white, and gold, onto a pedestal. Wu Hung, the adjunct curator of the Smart Museum, entered the room and approached the work. He signaled for the preparators to rotate the sculpture on its pedestal. They did. He took ten or so steps backwards, then stopped. Everything was still. He looked at the work on the pedestal, assessing its orientation in the space. He shifted his weight, regarded the work again. A moment later, reapproaching the pedestal, he gave another signal for the preparators to rotate the sculpture further, only a bit more. Then he did his pensive, backward model-walk again, and this ritual continued for some time, Wu moving ever back and forth as I watched from the corner, entranced.

At this first viewing, it was in equal measure the artwork itself and the theatricality of installation that captivated me so. The piece was bigger than my postcard had let on, and in three dimensions, it seemed to possess a certain magnetism—as if Wu was not in a position of power and control, but one of orbit, a mere satellite pulled in and pushed out by some intangible force manifest in the ceramic, epoxy, and gold leaf of Yeesookyung’s creation. Indeed, I too was pulled in.

Four days later at around 7 p.m., I found myself again before the piece, this time sharing the gallery with the erstwhile artist in residence at the Smart, Irene Hsiao. She and I have a casual and bantering familiarity, and it was not long before we were veritably in orbit, on all fours on the pebble-dashed floor, seeking new perspectives from which to view Translated Vase.

“These aren’t cracks in the same sense as the other works here have cracks,” I said in reference to the ribbons of gold. “They’re seams, maybe veins; binding as well as breaking.”

But of course Hsiao already knew this. In fact, she has created an artwork inspired by this very notion of coming simultaneously together and apart, inspired by Translated Vase. These are the details, as far as I know them.

Hsiao injured her shoulder some months ago in a dance performance. Her physical therapist, she came to know, was a B-boy. She didn’t think much of it. Then, in the gallery of the Smart, Translated Vase sparked an idea: a piece about structures forming and dissolving. And who better to collaborate with than a physical therapist–cum–B-boy, a “person with both healing and breaking in him”? 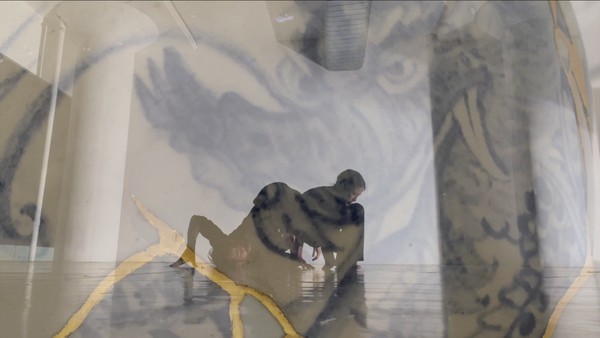 And here it is, [Hsiao's] piece for your delectation—a palpable sense of disorder just beneath an elegant (perhaps even misleading) surface, bodies intertwining and unwinding, in orbit, in translation.

On the eve of the Porcelain: Material and Storytelling exhibition’s deinstallation, what lingered in my mind was all this movement. Why is the aestheticization of cracking so motivating? Why, when confronted with this translation, was I so compelled to encircle, get closer, crouch down on the floor? And Hsiao to dance? And Wu to model-walk?

Things are lost in translation. What is inside the vessel, we can’t know. It’s closed off, lost. Indeed, its status as a vessel, or several vessels, is lost too. And so is a sense of time, that interplay between old and new. Just as is cultural identity, for is this work Chinese, as we assume of most blue and white porcelain? Japanese, as the reminiscence of kintsugi would have us believe? Or is it Korean? Yes, things are lost. And in this haze of ambiguity, Yeesookyung renders translation and the unknown beautiful. She compels us to treat that which is unidentifiable, that which is lost, with reverence and curiosity, when we might otherwise have responded with anxiety and fear.

Alas, Translated Vase has been hidden away in the archives, awaiting translation into the next exhibition, and I have to rely on my postcard for the time being. But it won’t be too long, this period of absence but a slender sliver of time, a mere ribbon of gold.