Dua Lipa: A Cause for “Future Nostalgia”

By Jerry Shi   and Sofia Hrycyszyn 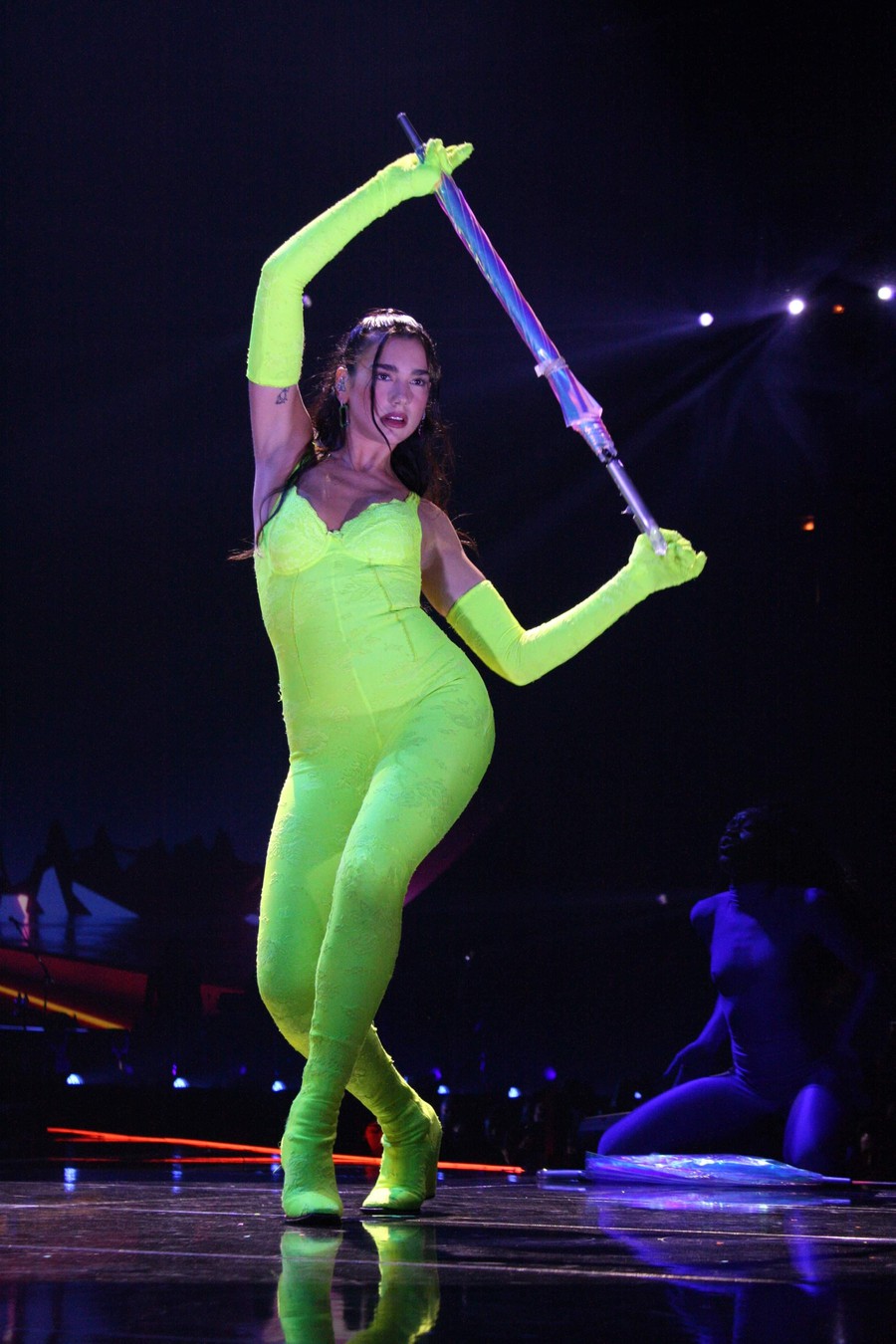 Flanked by her dancers, Lipa emerged in a lime bodysuit with matching gloves.

The pre-show music faded with the lights. There was a pause before the crowd erupted. The words “Dua Lipa presents” appeared on screen, followed by “Future Nostalgia.” As the screen introduced each backup dancer, building the crowd’s anticipation, a familiar ’80s tune gradually morphed into “Physical,” the first song in the set, and Dua Lipa appeared on stage.

On a chilly March night in Chicago’s Near West Side, Lipa performed in what felt like an overflowing United Center. Her ability to sell out an American arena effortlessly is indicative of her recent rise in popularity. Inspired by ’80s-era disco-pop, her 2020 album, Future Nostalgia was the second most streamed album globally in 2021, according to Spotify. Her success is, in part, due to her likable personality, evident in her ability to connect with her Chicago audience specifically. She had the crowd holding its breath as she shared that in some ways, she felt her journey had begun in Chicago.

Flanked by her dancers, Lipa emerged in a lime bodysuit with matching gloves. Her calm demeanor and colorful, skin-tight outfit were in stark contrast with the appearance of her opening acts. The first opening performer, Lolo Zouaï, bounced around the stage in a white jacket and shorts, her hair pinned back with pink barrettes. Caroline Polachek, Lipa’s second opener, performed in a flowing black dress. Polachek’s dancing was captivating. The undulating motions of her hands were framed beautifully under deep green and red lights and her movements were projected onto the screen behind her, creating a mirrored funhouse effect that complemented her powerful vocals and the unsettling atmosphere.

Still clad in her yellow bodysuit, Lipa followed “Physical” with “New Rules,” arguably the song that first brought her into the American spotlight. Even though “New Rules” wasn’t on Future Nostalgia, it was an understandable choice given its popularity and ability to engage the audience. As she ran through some of Future Nostalgia’s more popular songs—namely “Love Again,” “Cool,” and “Pretty Please”—Lipa’s backup dancers, clad in dark blue, shadowed her highlighted movements. Stepping up the energy for the end of her first act, Lipa’s dancers used silver heart props to accent the choreography for “Break My Heart.”

Before diving into “Be the One,” another fan favorite from her 2017 album Dua Lipa, Lipa took a minute to speak to the audience. Drawing on the shared experience of the pandemic, she reminded viewers how exciting it was to finally be able to resume group activities. There were very few masks in sight, and she was met with a round of cheers. In performing “Be the One,” Lipa alternated with the crowd in singing the chorus, engaging them so that those without a clear view of the stage hardly noticed when she ran off and left her backup singers to finish the song.

With Lipa still offstage, “IDGAF,” another older fan favorite, began to play quietly in the background. In front of a neon sign reading “Fresh Seafood and Cocktails” with a “Yours Truly” in the center, two men on roller skates slid across the runway, wielding platters of fake cocktails. As they backed off the stage, a cartoon version of Lipa grabbed the audience’s attention. An animated comic strip featured her near escape from a lobster while deep in the ocean. As she began “We’re Good,” seemingly a reaction to her near miss with the crustacean, the stage lights revealed Lipa, clad in an asymmetrical white bodysuit, reclining in front of a giant blow-up lobster. With the transition into “Good in Bed,” Lipa picked herself off the floor, and the lobster was quickly replaced by swirling images of cherries. Switching to the more traditional concert smoke and deep blue lighting, the act finished with “Fever” and “Boys Will Be Boys.” As Lipa descended into the stage for another outfit change, her dancers took over for the interlude.

The dancers gathered beneath a lowered light fixture at the end of the runway, their energy matching that within a club. Lipa, dressed in pink tights under black shorts and a sleeved black top, soon joined them for one of her biggest songs, “One Kiss.” She sustained that high energy during “Electricity” and “Hallucinate” but toned it down for “Cold Heart (Pnau remix),” her 2021 collaboration with Elton John. As clips of Elton faded in and out on screen, Lipa paraded down the runway, trailing a pride flag behind her. For the closing bars of the song, Lipa and her dancers wrapped their arms around each other in a display of community and LGBTQ+ solidarity that was resonated with the audience.

The stage went dark, building anticipation for one of Lipa’s remaining hits. Blue light poured over the end of the runway as opaque balls and stars lowered from the ceiling. A giant pink crescent reminiscent of a planet and Lipa’s Future Nostalgia aesthetic appeared on screen. The audience cheered as futuristic music gradually increased in volume. The first bars of “Levitating” rang out, and a spotlight revealed Lipa, wearing a sparkly black and sheer bodysuit, in a basket above the stage. The audience seemed to know every line. During the song, Lipa made her way down from the ceiling to center stage, walking backstage before the song ended and the lights turned off.

The crowd called for Lipa to come back, knowing that she had left out a couple of their favorite songs. The stage remained dark until a chant of “Dua, Dua, Dua” resounded through the arena. A wormhole appeared on the screen. Lipa stood center stage, striking a pose each time the lights flashed with the beat, transitioning flawlessly into “Future Nostalgia,” the namesake of her album and tour. Carrying her mic stand with her, Lipa marched down the runway, performing the song with all the confidence proclaimed in the lyrics. She strutted back to center stage to name her band members and vocalists. Lined up with her dancers, Lipa performed one of the biggest songs on her album, “Don’t Start Now,” with the entire audience backing her up. After an explosion of confetti, Lipa thanked her audience one last time before raising her mic and descending into the floor.