Snitchcock’s Spit.Run Made the Most out of Surveillance COVID Testing 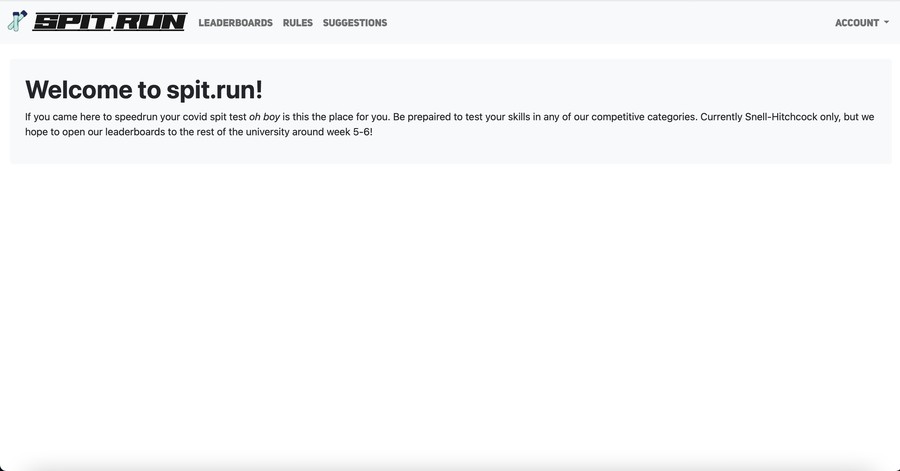 Most students got used to the weekly routine of COVID testing by the time mandatory surveillance testing was discontinued for on-campus residents last quarter, but the prospect of spitting in a tube was still not a cause for excitement. Third-year Grace Vencat and fourth-year Isaiah Zwick-Schacter set out to change this in Snell-Hitchcock residence hall through the creation of Spit.Run—a speed-spitting competition.

In the winter, Vencat and Zwick-Schacter noticed the sense of dread associated with mandatory saliva testing in their house and were inspired to make the haste with which people were already doing their tests into a competition. “The goal, and I think it was pretty successful, was to transform house conversation from ‘God, I had to do my test today,’ to people excitedly talking about their spit times,” Vencat said.

The competition had a visible impact on Snell-Hitchcock residents and their house culture. “Both the funniest and best thing [about “Spit.Run”] is that we’ll have a lot of hubbub at the Bartlett table; people even come up to me to ask for my time that week,” Vencat said. “Seeing people really getting into it is extremely rewarding.”

The project runs on a website coded by Zwick-Schacter, a computer science major. The website featured live leaderboards for each of the different testing categories. Participants used pseudonyms such as “A Dog Could Have Done It Faster,” “AntiNuclear Antibodies,” and “I can’t believe I’m doing this.”

Spit.Run involved two main categories of saliva volume: Line% and 100%. In Line%, participants’ saliva only needed to reach the designated line on the tube, which was also the standard rule for saliva-based COVID testing. In the 100% category, participants’ saliva needed to fill the entire tube. “This [was] unsurprisingly a less popular category, but we [did] have some avid competitors,” Vencat said.

Within these two categories, there were two sub-categories called Prep and No-Prep, the most common of which was No-Prep. Participants in this category could not collect saliva in their mouth ahead of receiving the test tube, and timing started as soon as the mouth was opened.

The Prep category allowed saliva to be stored in the mouth before the spit test, which Vencat and Zwick-Schacter had noticed that many students started doing to quicken the testing process. “There was this strategic balance of how much spit you could hold in your mouth while also giving your information to the front desk,” Vencat said. Timing started after crossing the doorway between the hallway and check-in desk. However, this timing rule was after surveillance COVID testing locations moved from Walker Museum to residence halls.

In order to enforce these rules and ensure fairness, people who got top-five times had to send a video of their saliva test to Vencat and Zwick-Schacter for verification. People also had to refrain from doing anything that would invalidate the accuracy of their COVID test.

Students took the competition seriously, with some even doing what Vencat calls the “chair skip”—taking the test without sitting down in an effort to save a few milliseconds. “[It had] gotten very silly…[but] making a big deal out of nothing [was] the most fun part,” Vencat said.

Vencat and Zwick-Schacter have enjoyed the house culture of Snell-Hitchcock over the years, and hope that this project contributes to it in the long run. “It feels amazing to pay it forward,” Vencat said. “But the real question is whether it will stand the test of time when we graduate—will the current first-years remember it? That’s what I think of when I think of house culture.”

Before the surveillance testing change last quarter, Vencat and Zwick-Schacter were looking to expand participation in the Spit.Run competition to other residence halls in hopes of making COVID testing more bearable for everyone. “The point is not that I want people to spit a bunch, the point is that I want to make [COVID-19 testing] more fun,” Vencat said.