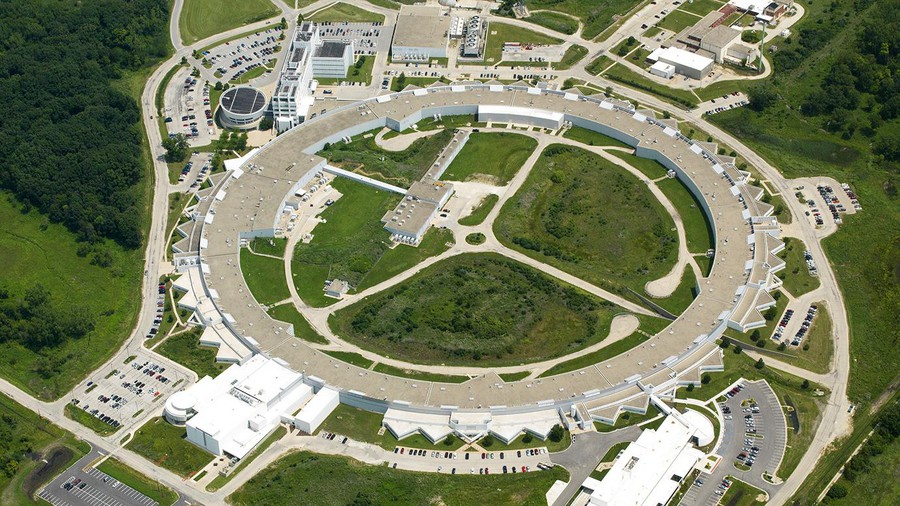 An aerial view of part of Argonne National Laboratory.

How did the universe begin? What is space made of? What is dark energy? These are the questions being answered by the scientists working at the South Pole Telescope (SPT) in Antarctica.

Originally constructed in 2007, the SPT is a 10-meter diameter telescope – the largest ever built at the South Pole. It is dedicated to understanding the fundamental physics of the universe by capturing images of the cosmic microwave background (CMB).

SPT is a collaboration of over 20 universities and laboratories, each bringing their own specialty to the table. Physicists from Argonne National Laboratory – a U.S. Department of Energy research facility with close ties to the University of Chicago- are tasked with developing and updating the camera technology in the telescope every three to six years.

Argonne Physicist Clarence Chang, who works on superconducting technology for SPT, explained about how the CMB came to be and why it is important. At the beginning of the universe, everything existed in a very hot, dense and uniform state. However, as the universe expanded, it also cooled and became transparent. This meant that photons stopped interacting with the material of the universe. These photons then became residual evidence of the early universe, forming what is now called the cosmic microwave background. By studying the properties of the photons, scientists can learn both about the timeline after The Big Bang and the current makeup of the universe.

The camera technology in the SPT is critical to this ability. Chang said, “These photons are basically impossible to detect, say, using the cameras in your cell phone. In fact, there are no commercial detectors that can mesh through these photons with the sensitivity that we do.”

The subtleties and purpose of the camera technology change with each upgrade. The earliest SPT camera, created at The University of California Berkeley, was designed to track the brightness of the cosmic microwave background at different points in the sky. This technique was aimed at detecting galaxy clusters, which would appear as darker splotches in the CMB.

Now, SPT can detect gravitational forces interacting with the photons to find remaining clusters. Lindsey Bleem, an Argonne physicist specializing in galaxy cluster data collection, describes this method: “We could find these massive clusters and these signatures independent of how far away they are, which is basically allowing us to track the formation of these really massive structures across the entire age of the universe of which they can form.”

The second SPT camera, jointly developed by Argonne National Laboratory and NIST Lab in Boulder, introduced polarization technology, which allowed SPT to look for evidence of the Theory of Inflation. This is different from the Big Bang Theory – the current model for the origin of the universe – which claims that the universe was born from an explosion, then after a series of chain reactions, expanded steadily over time. Instead, the Theory of Inflation challenges this model by proposing that rather than steadily expanding over time, the universe underwent a period of rapid cosmic acceleration immediately following the Big Bang. “A byproduct of that is gravitational waves into the universe. And those gravitational waves then generate a particular signal of the polarization of the cosmic microwave background,” Chang said.

According to Bleem, given the sensitive nature of SPT’s measurements, even the slightest interference from the atmosphere around the telescope could alter results. This is what makes the South Pole the perfect place for cosmic observation. The camera operates at extremely low temperatures (300 millikelvin), which limits the possible locations for data collection.

“One of the huge advantages of going to Antarctica is that when the sun sets for that six month period, you get this really incredibly stable atmosphere, which makes it a higher quality atmosphere at millimeter wavelengths, so you don't get a lot of agitation of water molecules, which add a lot of noise to our data,” said Bleem.

Scientists work on a seasonal rotation, so everyone can experience the eerie isolation of observing the cosmos from the bottom of the world. As Bleem puts it, “You’re just seeing them raw off the telescope. ‘I’m the first person who’s ever seen this.’ It is really a lot of fun.”

The South Pole Telescope is still collecting data and continues to explore cosmology’s frontiers, including dark energy, neutrinos, and black holes. Though physicists have made remarkable progress researching the beginning of the universe, many scientists still have questions.

“We have this lengthy period in our cosmic history we haven't been able to take a picture of, and we can guess, because we can see what the before times are, and what the after times are, but we’re sort of interpolating the middle… a lot of really hard problems that require creative people to solve,” Bleem said.