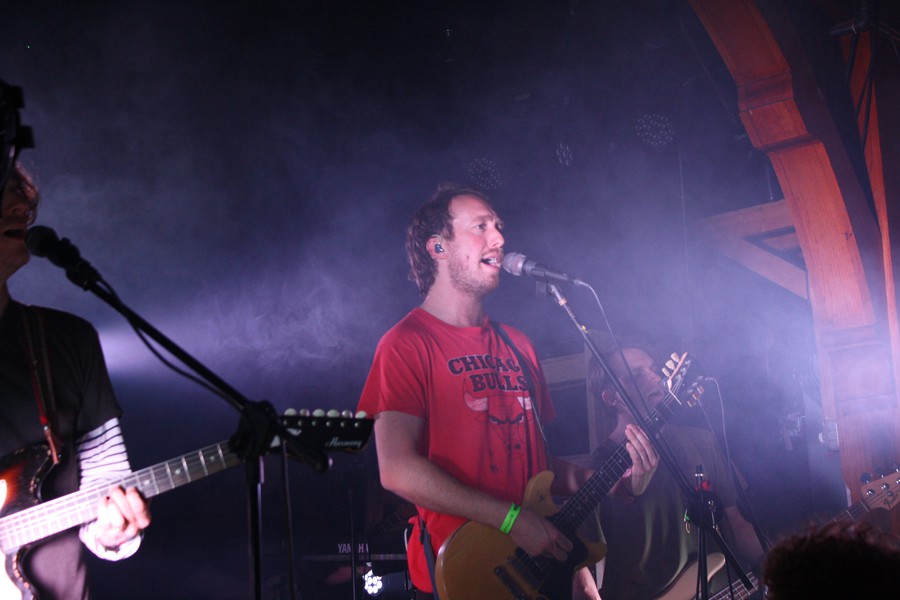 In between songs, the lead singer smiled into the crowd, taking a moment to thank his audience for being such “good company.” Max Rainer’s southern accent embodies the charm of Wilderado, an alt-indie band with roots in Tulsa, Oklahoma. Wilderado is composed of lead singer and guitarist Rainer, bassist and vocalist David Arthur Stimson, guitarist and vocalist Tyler Wimpee, drummer Justin Kila, and multi-instrumentalist Jack Malonis.

On April 14, the band played at Schubas Tavern, located a few blocks south of Wrigley Field. Schubas’s performance space, nestled behind a doorway after a quick walk past the bar, provides a secretive atmosphere. Red arches framing the stage create an intimate and enjoyable setting. The opening band, Flipturn—a young indie-rock group from Fernandina Beach, Florida—brought an electric energy to the stage. Their hit “Chicago” especially enlivened the crowd, their stage presence much more dynamic and powerful than their recordings. After successfully warming up the crowd, Flipturn exited, making room for the headlining band.

Wilderado entered through a side door, fresh out of a crisp Chicago night. They stepped onto a darkened stage in front of a vibrant crowd. The opening notes of “Stranger”—the first song on their debut album, Wilderado—echoed across the room. As the song progressed, the audience got their first good look at the band: just four guys and their instruments. No flashy outfits, minimal special effects, and a feeling of rustic, homely simplicity.

The band finished “Stranger” and moved on to “Astronaut,” continuing to play their way through the album. The audience grooved with every chord. As the closing beats of “Astronaut” dispersed through the room, Rainer stepped up to the mic to introduce the band. He said they were super excited to perform for this audience as Schubas was the first venue on their tour to sell out. Rainer wore a nondescript red Chicago Bulls T-shirt that he said he purchased on Etsy. Additionally, he said that during the tour, he had been saving it in his suitcase for the band’s performance in Chicago.

Rainer’s Tulsa accent was extremely apparent in conversation, less so while he sang. When he spoke, audience members greeted every sentence with cheers and responses. This support continued through the night as fans reveled in interactions with one of their favorite bands. Despite lacking an overly dynamic stage presence, Rainer and his supporting cast kept all eyes on their audience through a mix of striking emotion and a clear love for performing with one another. In fact, the dynamic between singer and band was one of the most captivating parts of the show; not only were the musical aspects of the performance extremely tight, but the band’s chemistry was palpable. Oftentimes, guitar solos turned into intimate jam sessions between members on stage.

The band ramped up with “Head Right” before playing through Wilderado, almost in its original order. The audience swayed, jumped, and danced as the room’s energy shifted from song to song but never lapsed. In monologues between songs, the band described their appreciation for being able to do what they love along with their hope to pass that same perspective on to their kids. Much of the band’s music describes fatherhood. In the best way possible, the “cool dad” vibe was apparent throughout the whole show.

“Help Me Down” started completely acoustically, with Rainer singing on his own in the spotlight. After the first chorus, the whole stage erupted in color and the rest of the band joined in. Audience members sang along with each song’s every word and swayed to the melodies as the show rolled to a close. They finished their set with “Sorrow” and exited back into the Chicago night.

After a few minutes, much to the glee of the audience, the door cracked open and the band reappeared, accompanied by their opening band. Flipturn mingled by the door while Wilderado retook the stage and played their most popular song, “Surefire,” for which fans had been clamoring all night.

It was almost impossible to imagine an ending to the concert that would leave every listener feeling wholly satisfied, but somehow the band delivered. Every member of Wilderado stepped forward to the mics at the front of the stage. Rainer began to address the crowd, mentioning how he always gives a short, impactful speech about their next and final song, “Rubble to Rubble,” which describes the process of becoming a dad. However, the concertgoers, who had been voicing their desire to hear “Rubble to Rubble” all night, were so eager that Rainer skipped his speech. Instead, the audience received a beautifully raw performance of one of Wilderado’s best songs, which culminated in their bringing Flipturn on stage for the last verse and chorus of the song as every person in the room sang along to every word. The bond between the two bands was evident on stage, and the show ended with emotional embraces between members of both bands.

Then, just like that, it was over. Wilderado walked calmly off stage, unfazed by how the entire room commended the band for a phenomenal night of music.