Behind the Scenes at CPOST, the Research Center That Unearthed Major Findings on January 6

Robert Pape, director of the Chicago Project on Security and Threats, tells The Maroon about how the January 6 insurrection was a harbinger of the increased support for political violence brewing in the United States. 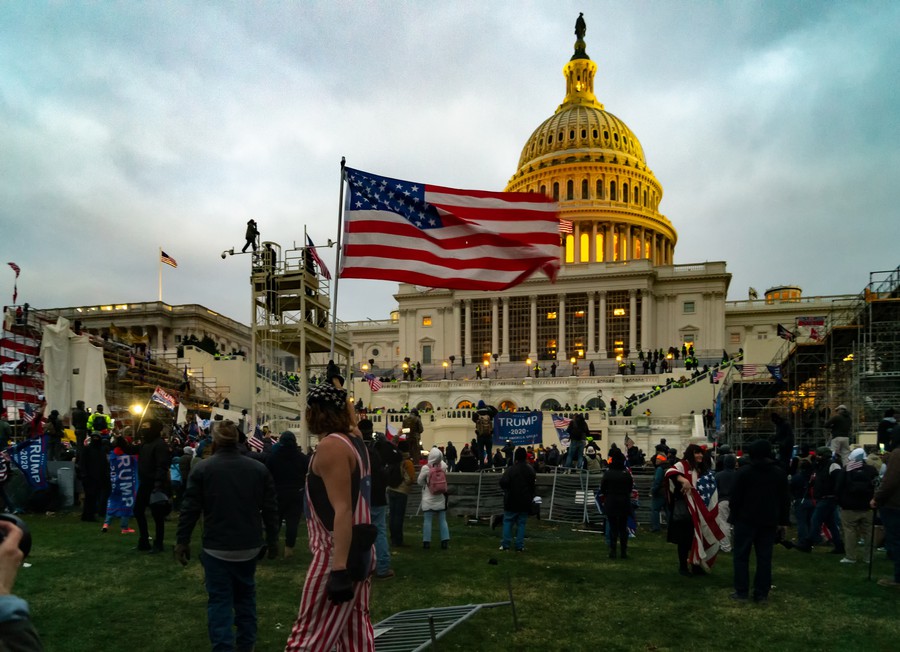 On the Wednesday before winter quarter 2021 began, a crowd of almost 1,000 rioters from across the United States descended upon the Capitol Building in Washington, D.C., brandishing weapons and “Trump 2020” flags, attacking officers, and even trampling some of their own. As Americans across the country reeled from the events, Chicago Project on Security and Threats (CPOST) research director Robert Pape kicked into high gear.

In a matter of days, Pape pivoted the center and its staff—many of whom were home for the holidays with their families—from studying broader trends of global political violence to collecting data on the approximately 800 people who, on one cold afternoon in Washington, changed the course of American history. They would soon discover, faster than even some federal agencies, that the insurrection marked an unprecedented chapter of American political violence.

In an interview, Pape took The Maroon behind the scenes of CPOST’s pivotal research and the people and history that made it possible.

CPOST’s staff is composed of Pape, fellow executive director Rod Cowan, research directors, student research supervisors, and about 30 undergraduate research assistants. Pape credited the environment at CPOST and the University as a whole for enabling the research.

“[CPOST is] really where people are really able to use their talents to collect systemic information that matters to the White House [and] Congress in order to help protect and safeguard democracy,” Pape said. “Normally with research centers, you sort of have an idea, and then five years later, you get some money, and then five years after that, you actually do something. This is a completely different situation.”

Pape founded the center as the Chicago Project on Suicide Terrorism in 2004, intending to study the causes and effects of suicide terrorism. Pape and his team compiled their research into the Database on Suicide Attacks, which includes data on attacks spanning from 1982 to 2019.

As the center grew in size, its focus broadened to issues of global security, and the center was renamed the Chicago Project on Security and Threats in 2014. Multiple UChicago political science professors, including Paul Staniland, Austin Carson, and Rochelle Terman, have since joined the project as faculty associates. CPOST has also established a board of advisors, the members of which have served in high-ranking roles in government, finance, and strategy.

In the aftermath of the January 6 insurrection, CPOST shifted its attention to collecting data on the insurrectionists with the goal of uncovering trends that major media organizations had not captured.

Among other, more granular discoveries, CPOST’s research into the January 6 insurrection has revealed two surprising, and for many worrying, conclusions: Not only do the insurrectionists come from a variety of demographic backgrounds and socioeconomic classes, but 8 percent of the U.S. population agrees with the insurrection’s main tenets. This figure dwarfs the rates of support for other notable waves of modern political violence, Pape explained.

“People who are familiar with political violence might think, ‘Well, 21 million, that’s 8 percent of Americans. What’s the big deal?’ Well, the big deal is that’s not 1 percent or half a percent. That is what we find in other cases—[the Troubles in] Northern Ireland, Germany during the ’70s and ’80s—which led to the rise of sustained terrorist campaigns in modern liberal democracies, and those are coming from this level of community support. So this isn’t a ‘How do I find the needle in the haystack?’ [or] ‘lone wolf’ problem like [the Islamic State]. This is a different situation,” Pape said.

Pape explained that CPOST researchers used similar approaches to study the January 6 insurrection to the ones they used for the Black Lives Matter protests that began in May 2020 following George Floyd’s death.

“We didn’t have to invent procedures, so we started right away, within just days after January 6, to focus on who was arrested,” Pape said. “We knew right away that would provide a lot of hard data on the demographics, possibly something about their motives, and then that could be distilled in our research.”

Despite the lingering specter of COVID-19 and rising case numbers across the country, CPOST was determined to proceed with an investigation.

“What happens is: within four to five days, not even two to three weeks, we reorganize these research teams in order to immediately jump into this and have results here by the end of January that are truly systematic results, not just ad-hoc pieces of information like we were seeing in the news,” Pape said.

In the initial months after the insurrection, CPOST focused on uncovering the names and backgrounds of people who had been arrested. Just three weeks after the insurrection, the 30-odd researchers at CPOST had collected information on 193 suspects in an investigative effort that went beyond the breadth and depth of previous research into the same event.

Pape and research director Keven Ruby coauthored an article in The Atlantic illustrating this initial set of discoveries. The data showed, in Pape’s words, a “surprising” set of characteristics and commonalities among the insurrectionists: Whereas previous violent right-wing offenders were multiple times more likely to be unemployed than the national average, the unemployment rate of the January 6 insurrectionists—9 percent in this initial survey—was just a few percentage points above the national rate of 6.3 percent recorded in January 2021.

Additionally, while previous generations of violent right-wing instigators came from rural counties with predominantly Republican voters, the majority of the January 2021 rioters came from urban and suburban areas with similar numbers of Democrats and Republicans. Many came from middle-class backgrounds and worked as doctors, lawyers, and other white-collar occupations. And although militia members were, according to Pape, “plastered all over the news media,” his research showed that they constituted only a small minority of the insurrectionists.

“That’s when we first really understood that what we were seeing was not the fringe of America breaking into the Capitol,” he said. “What we’re seeing is really collective political violence in the mainstream of America in ways we hadn’t seen before.”

After this initial watershed discovery, Pape and CPOST expanded the scope of their research, collecting information on support for the insurrectionist movement. Vishan Chaudhary, a third-year who has been a research assistant at CPOST since fall 2020, has spent the past year adding new information on arrests and criminal charges to CPOST’s database, tracking who pleads guilty, and conducting deep dives into the motivations of insurrectionists and whether they have military history.

In the months since the initial dataset was released, Chaudhary and his fellow research assistants have been able to uncover qualitative trends among the assailants. “That’s also enabled us to go more in depth on each one. What are their motivations? Why were they at the capital? That sort of analysis rather than just the surface,” Chaudhary said.

The topic of motives, Pape believes, is ripe for additional research. CPOST’s latest project is a report analyzing the stated motives of the more than 700 people who have been charged. “Stated motives are not the same thing as their genuine, accurate motives, but it will be the most systematic analysis of all the available evidence of their stated motives that exists.”

CPOST and the National Opinion Research Center (NORC) conducted a nationally representative survey in June 2021 in which they asked respondents to explain their support for the two main motivations of the January 6 insurrection: that Joe Biden is an illegitimate president who stole the 2020 election and that the use of force is justified to restore Donald Trump to presidential office. The survey also aimed to deduce the activity level of the movement and whether participants had previously attended protests or riots.

In CPOST and NORC’s joint survey, 8 percent of respondents agreed with both sentiments, representing approximately 21 million voting-eligible United States citizens. This would make the beliefs at least 10 times more popular than other fringe ideologies. Pape said this discovery—the “eureka moment” for investigating the insurrection—prompted CPOST to conduct subsequent surveys to evaluate the longevity of the trend. He spent two days in in-person meetings with White House staff to discuss the results.

CPOST’s nationally representative surveys have been conducted every three to four months, allowing Pape to see what effect, if any, specific political events might have had on insurrectionist sentiments. In the period between the surveys conducted in June 2021 and September 2021, President Biden withdrew U.S. troops from Afghanistan, bringing to an end the 20-year war in Afghanistan and facilitating the return of Taliban rule. But Pape said that any correlations between changes in sentiment and Biden’s controversial response were merely “coffee table speculation” without a firm statistical basis.

Their analysis of the January 6 insurrection found that participation in the insurrection was best predicted by belief in the Great Replacement Theory, which posits that the Democratic Party is changing its electorate by bringing in immigrants who would reliably vote for the party. Seventy-five percent of the 21 million holding insurrectionist sentiments subscribed to the theory, according to CPOST’s September 2021 survey.

Though news media was a major influence on sentiment, most of the insurrectionists reported consuming sources that the researchers classified as mainstream. CPOST’s research showed that only 10 percent of those agreeing with insurrectionist sentiments used far-right social media platforms like Parler and Gab, compared with 42 percent for more “traditional” conservative media platforms like Newsmax, One America, and Fox News.

The insurrection has affected all branches of American government. Donald Trump has since been impeached for inciting the insurrection, Republican representatives have been censured by the GOP for their roles in investigating the event, and the first convictions have been handed down by federal courts for some of the hundreds of rioters. As much of the American public shifts its focus to the midterm elections for Congress in November 2022, the aftermath of January 6 has continued to generate headlines. The first criminal proceedings for the insurrectionists began in March 2022, a few days before Pape spoke to The Maroon. Guy Reffitt—a 49-year-old father from Wylie, Texas—pleaded not guilty to five counts of obstruction and weapons charges. He was convicted on all charges and is set to be sentenced on June 8 to a maximum of 60 years in prison.

Chaudhary said that CPOST’s monitoring of the proceedings would help uncover similarities among and differences between insurrectionists. “[We’re] seeing how the insurrectionists reflect on their role that day and seeing who pleads guilty and what makes them different from other people,” he said.

Pape’s research also hints at potential sources of future violence. Over the past year, new election laws have been implemented in states like Georgia and Texas. These rules, which restrict voter registration ability for the purpose of creating a more secure ballot, have been widely condemned for exacerbating racial inequality. Lawmakers and political experts believe it to be an attempt by Republicans to ensure their electoral success in the 2022 congressional elections following, among other events, narrow defeats in the two Georgia Senate runoff races held on January 5, 2021—just one day before the insurrection.