Grey City investigates critiques of UChicago's Crime Lab and its relationship with the Chicago Police Department. 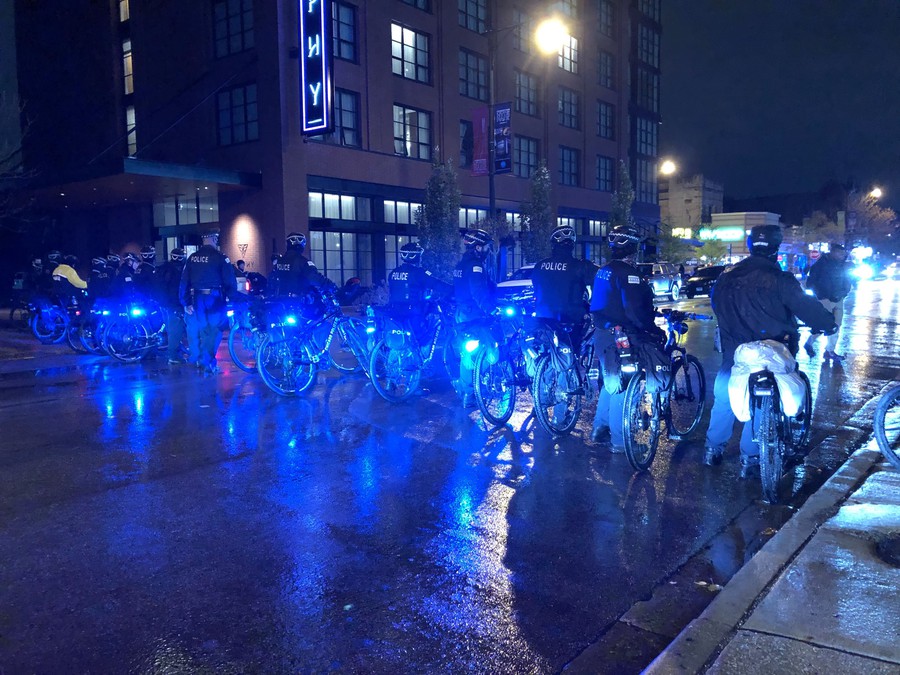 Police form a bicycle line as they corral a group of teens west on 53rd St.

The University of Chicago’s Crime Lab is premised upon a faith in data and the belief that governments fail to address systemic issues because of the complexities of the issues that communities face. The Crime Lab is one of five that collectively make up the University of Chicago Urban Labs, part of the Harris School of Public Policy. The Crime Lab states that its goals are to “advance public safety, improve educational outcomes, and advance justice.” The organization aims to solve these issues by using data science and research to implement programs and policies that inform the decisions of policymakers and city agencies.

The Lab collaborates with many preeminent academic institutions, including NYU, Northwestern, Harvard, Princeton, and Yale. It is also backed by a number of political heavy hitters, including Barack Obama.

But some believe the Crime Lab is hurting those it purports to help.

In June 2020, Robert Vargas, an associate professor of sociology at the University, wrote an op-ed in The Chicago Maroon entitled, “It’s Time to Think Critically About the UChicago Crime Lab,” in which he claimed that the Crime Lab’s main issue is its strong focus on a person’s behavior, which leads them to see Black people and communities as needing to be fixed.

“This approach is not new but is rather the latest iteration in a series of efforts to improve cities by managing Black individuals instead of ending the police violence Black communities endure,” Vargas wrote.

Critics also take issue with the Lab’s lack of transparency. The Crime Lab’s operations were not open to the public until after Lucy Parsons Labs (LPL), a San Francisco- and Chicago-based organization that specializes in digital rights regarding law enforcement issues, won a lawsuit in December 2020. A court ruled that the Crime Lab’s workings were subject to the Freedom of Information Act (FOIA) because the Crime Lab providing data to the Chicago Police Department (CPD) constituted a “government function.”

Writing while the LPL suit was ongoing, Vargas argued that “[a]n unaccountable private research lab partnering with an unaccountable police force should be troubling for anyone concerned with transparency, justice, and civil rights—the very principles that many protestors have been fighting for on our city streets.”

Vargas and other critics see this as part of a longer history. According to a recent paper Vargas published in the UChicago Law Review entitled “Capitalizing on Crisis: Chicago Policy Responses to Homicide Waves, 1920–2016,” the City of Chicago has “misused data to advance agendas” of policing during its largest sudden increases in violence A wave of homicides that swept through the city in 2016 was the first time Chicago had relied heavily on data from private labs, like the Crime Lab, in order to justify its strategies.

Vargas concluded that private labs that have data agreements with the City, in addition to having very little public oversight, historically have used data to legitimize the use of policing as the main method of achieving public safety.

Later the same year, South Side Weekly and Rampant magazine published an op-ed co-authored by a former Urban Labs employee writing under the name “Troy Bolton,” who had “become increasingly distressed by the Crime Lab’s dogmatic commitment to pro-policing research methods.” The op-ed called for the Crime Lab’s abolition, arguing that the Crime Lab’s research and policy recommendations are “steeped in scientific racism.”

“From the data Crime Lab chooses to use, to the partnerships that allow them to access that data and the analytical methods they employ, the Crime Lab’s decisions are deeply political, deeply conservative, and deeply committed to the status-quo power dynamics of capitalism and white supremacy,” the authors wrote.

One point of controversy has been the Crime Lab’s “Strategic Decision Support Centers” (SDSCs), which are hubs made up of “civilian analysts” who are sent to CPD districts to inform policing strategy these areas. The policing done through the SDSCs is highlighted as a main issue in the South Side Weekly op-ed. The authors write that these data centers choose to focus on police-provided data while Chicago’s 7th and 11th districts—the locations of the first two SDSCs—“have more complaints made against cops than almost all other districts.”

SDSCs are equipped with various kinds of surveillance equipment, predictive policing technology that uses data to anticipate the incidence of crime, and lab analysts. SDSCs were established in conjunction with the CPD in Englewood and Garfield Park, neighborhoods close to UChicago’s campus, to reduce gun violence in these areas.

Roseanna Ander, the founding executive director of the Crime Lab and the Education Lab, argued that the SDSCs were put in place to better the work of police officers while also making them more effective.

“The idea behind the SDSC is to say, let’s provide data and information in a real time way to commanders so that they can make better decisions, but they can also hold their officers more accountable for where they are, what they're doing, and how they're doing. It will also incentivize building relationships with community residents,” Ander said.

Ander acknowledged concerns over the organization’s relationship with the CPD but argued that the Lab can also be a force for good in Chicago’s communities. She also argued that the Lab does believe that there are benefits from working with police, and that the Lab couldn’t release certain information due to research privacy ethics.

The Crime Lab collects data from its SDSCs in Garfield Park and Englewood, which the Crime Lab called one of the most violent districts in the city. It then sends that data to police commanders to inform them on how to more efficiently and effectively use their police force to better serve their communities. CPD funded and trained civilian analysts that work in SDSCs and later report to CPD district police commanders.

LPL’s objection to the SDSCs is that the civilian analysts play a role that is very similar to law enforcement officers. The arrangement amounts to a surveillance group, the organization argues, performing functions that only CPD has the authority to do.

In one recent collaboration with the City, Crime Lab teamed up with the Mayor’s office in 2014 to present a gun tracing report to understand gun violence in the city and craft a policy response to these issues. The paper compared the number of guns recovered in crimes and the homicide rates in Chicago to those in New York City, Los Angeles, and Toronto, while also offering insight into Chicago’s gun issues. The report concluded that having an understanding of where people are acquiring guns will help reduce the flow of trafficked guns, thereby reducing local violence. Later that year, the Chicago City Council voted on a law that required a 72-hour waiting period to purchase handguns, a 24-hour waiting period to buy rifles, and mandatory background checks for gun store employees, among other security measures.

Freddy Martinez, co-director of LPL, linked the mass surveillance of communities of color, such as that done by the Crime Lab and other academic institutions, to scientific racism and the process of justifying racist ideas with data that seems to support them. He noted that the Strategic Subject List (SSL), a now-retired CPD list of residents predicted to be involved in violence in the city, disproportionately included Black men in their twenties.

In an interview with The Maroon, Kimberley Smith, the director of programs at the Crime Lab and the Education Lab, defended the Crime Lab’s work as a way to make policing more equitable using data-driven solutions.

“When we talk about the work with the police department, I think it's really important to recognize that policing can have just enormous harms and social costs associated with it. There are also ways that policing can help reduce some of the most harmful things, like gun violence, and so we've tried to focus on making that system of policing kind of large, more transparent, more accountable, and more effective,” Ander said in an interview with The Maroon.

But its opponents view this collaboration as an inappropriate use of private dollars. Crime Lab researchers “would do things like go to conferences and share the stage with [the] Chicago Police Department,” Martinez told The Maroon in an interview. “It is really breaching the public-private firewall.”

LPL is still internally deciding whether or not it will take further legal action regarding the Crime Lab. Since the 2020 FOIA suit, the City has published information from SDSCs in a “Violence Reduction Dashboard” with statistics about violence in the city by neighborhood.

Martinez, however, does not believe that more transparency alone will fully remedy the issues surrounding the organization. Rather, the issue is the inappropriate combination of private academia with public surveillance.

“What they're doing is embedding academics in something that they shouldn’t be doing…I think what they need to be doing is getting out of this business entirely…I think this is one of those [moments] where you should take a full pause and really, really evaluate on if you're actually helping or making the situation worse.”