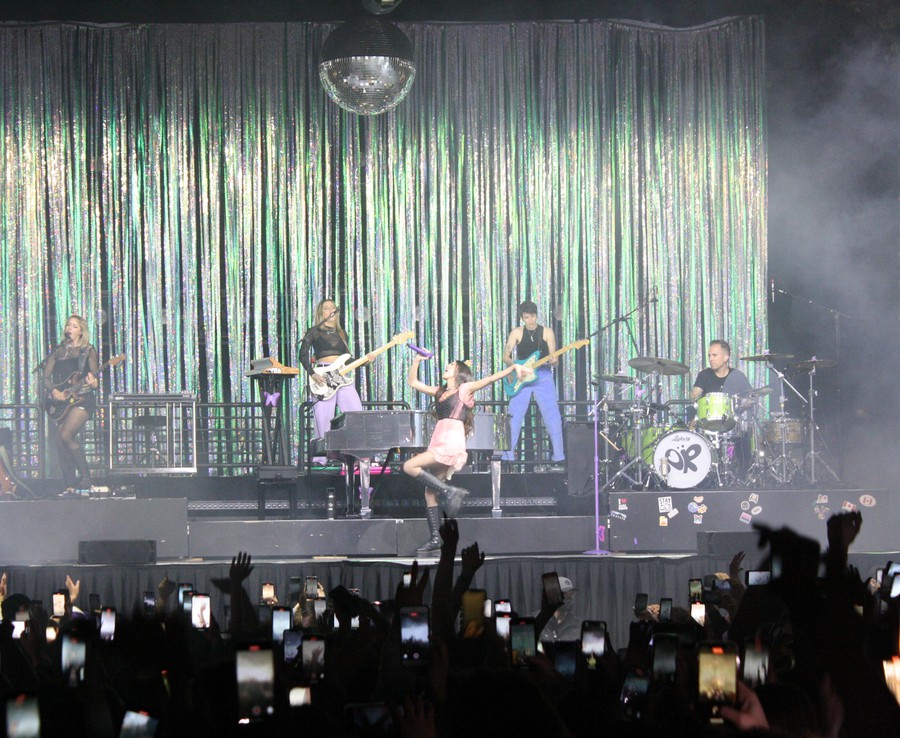 Olivia Rodrigo, the Disney actress turned pop star whose single “drivers license” was Spotify’s most streamed song of 2021, kicked off her Sour tour on April 5. Sour is Rodrigo’s debut album, an exploration of love, heartbreak, and the struggles of being a modern teenager. The album experienced enormous success last year, and the Sour tour is fully sold out.

As part of her tour, the 19-year-old spent two nights at Byline Bank Aragon Ballroom in Chicago, performing Sour tracks, rock covers, and a song from Disney+’s High School Musical spinoff in which she stars. In a stunning display of her versatility as a singer and songwriter, she switched effortlessly between angsty punk anthems, heart-wrenching power ballads, and stripped-down, guitar-only versions of her most intimate songs.

Gracie Abrams set the mood in the opening act with her wistful bedroom pop tunes, infusing the songs with a passion that made them sound even more personal than the recorded versions. As she sang hauntingly about loneliness and anxiety, the crowd screamed her name and waved.

The preshow soundtrack that followed Abrams’ performance included “Olivia” by One Direction, which played as Rodrigo’s all-female band took the stage. Then, lights flashed, the stage changed color, and the band began to play. Rodrigo ran onstage to the sound of deafening screams and began to sing “Brutal,” a pop-punk song about navigating adolescence. The live version featured heavier instrumentation than the recorded version, with the electric guitar coming to the forefront. The more pronounced instrumentals boosted the energy of the song and highlighted Rodrigo’s electrifying vocals. She then transitioned directly to “Jealousy, Jealousy,” which likewise featured strong live musical backing. As Rodrigo shouted, “Let’s go!” and jumped around the stage, the ramped-up guitar and drums transformed the jazzy tune into a full rock anthem.

In addition to these two songs, Rodrigo paid homage to the women of the ’90s and ’00s punk/alt- rock scene with two covers: Avril Lavigne’s “Complicated” and the Chicago-based band Veruca Salt’s “Seether.” Though it lacked the over-the-top energy of Lavigne’s version, Rodrigo’s cover of “Complicated” animated the audience, who sang almost every word. In contrast, the crowd was almost silent for “Seether,” a 1994 hit. The silence provided a rare chance to fully hear Rodrigo and her band, although the guitar and drums at times overshadowed Rodrigo’s vocals.

The most powerful performances of the night were the vulnerable ballads about heartache and betrayal. Raw emotion is what Rodrigo does best: her complete openness about her feelings and experiences allows her to package real, complex, human emotions into her songs. She sings about jealousy, insecurities, heartbreak, and anxiety; her relatability is part of what makes her music so appealing to her young fanbase. On top of that, her training as an actress allows her to replicate the same anguish that is captured in the studio versions each time she performs. Her audience gets the full experience of the emotional rollercoaster that Rodrigo describes on Sour.

The live performances of “Drivers License,” “Traitor,” and “Happier” were every bit as good as the studio versions and put Rodrigo’s piercing, emotion-infused vocals on full display. When she reached the famous bridge of “Drivers License”—“red lights, stop signs”—the stage turned red, lights flashed, and the crowd’s singing nearly drowned Rodrigo out. She laughed at the crowd’s enthusiasm and invited them to sing the last stanza—a moment of catharsis for the audience.

Perhaps most impressive, though, was her ability to replicate the emotion of “Favorite Crime,” a despairing indie pop ballad. Rodrigo’s voice quivered in all the right moments, her face appeared anguished at times, and the lyrics “crossed my heart as you crossed the line” stretched across the backdrop. It was during this dramatic performance that her background as an actress was most obvious.

In between cathartic ballads and angsty pop-punk tunes, Rodrigo squeezed in some quieter, more intimate moments. At one point, she stood alone at the front of the stage with her guitar and performed stripped-down versions of “Hope Ur OK,” “Enough for You” and “1 Step Forward, 3 Steps Back.” These short breaks from running and jumping all around the stage were clearly needed. At some points, Rodrigo was so out of breath that it was difficult to hear her when she spoke to the audience. She was audible when it mattered most, though, like when she asked, “Do you get deja vu, Chicago?”—causing the audience to shriek excitedly—before breaking into her hit single “Deja Vu.”

Rodrigo closed out the show with “Good 4 U,” which reached the top of the Billboard Hot 100 last May. As confetti fell and lights flashed, she sang angrily about an apathetic ex and banged the cymbal set. The live rendition of “Good 4 U,” was excellent, with Rodrigo repeating the bridge several times to get the audience to sing along with her and build up the energy in the room before singing the final chorus, which includes the popular line, “like a damn sociopath.” The energy stayed high even after she left the stage, with fans continuing to sing and dance in the audience and as they made their way out of the venue.