“Chill,” but not in a boring way, mxmtoon’s Chicago concert was an ode to COVID-era indie girl bedroom pop. 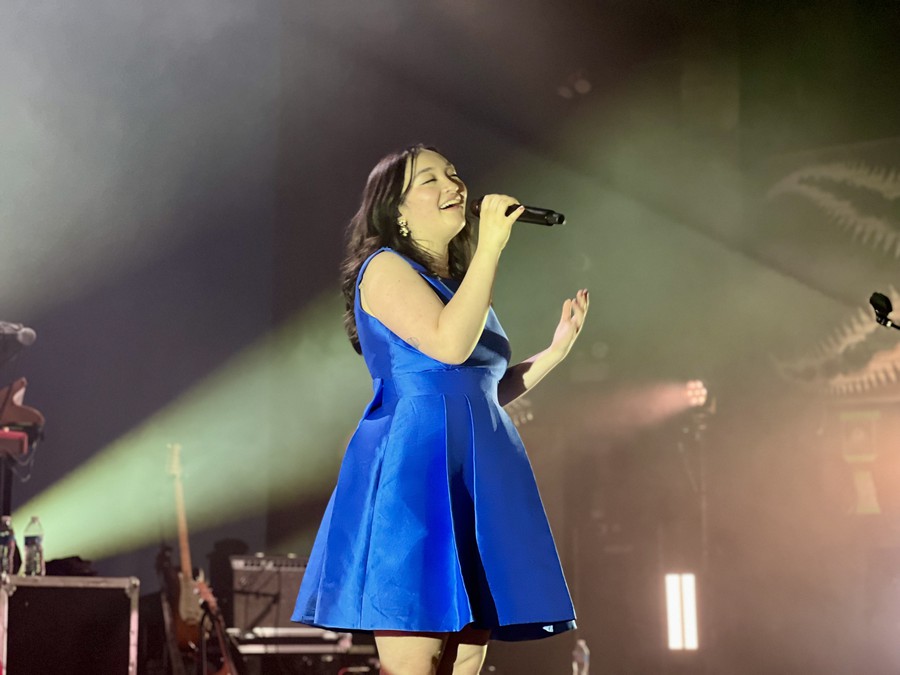 Disclaimer: mxmtoon is almost the same age as me, which lends her self-written songs an extra degree of ~relatability~ especially as I near graduation. That said, someone behind me at this concert had to explain to their friends that Harry Styles used to be part of this little-known band One Direction. I don’t think I’ve ever felt as old as I did in that moment.

A few weeks ago, a friend told me—as an Arts Hot Take ™—that the literary genre of disaffected, mostly white, millennial women (think Sally Rooney’s Normal People, or Ottessa Moshfegh’s My Year of Rest and Relaxation) was coming to an end. He didn’t name a successor to the genre, but I’d argue that it can be found in music, rather than literature. If millennial women turned disaffectedness into paragraphs, then Gen-Z is transforming anxiety and apathy into lyrics. It’s the age of indie girl bedroom pop, the genre at the forefront of singer-songwriter mxmtoon’s May 7 concert.

Indie pop—or more specifically, sad girl indie bedroom pop—isn’t a new genre. Artists like Mitski and Lucy Dacus have laid foundational groundwork for the past decade, expressing the melancholy and bittersweet of the everyday. But with artists like girl in red, Clairo, and mxmtoon rising to prominence, it’s a genre that has become especially popular through COVID-19, as concert halls were swapped for bedroom livestreams, although it’s worth noting the additional impact of TikTok on mxmtoon’s success.

Is it possible to describe a concert as chill? That’s not to say mxmtoon’s concert was boring—far from it—but that you wouldn’t hear mxmtoon songs on a Bar Night Playlist. Kicked off by opening act chloe moriondo (standout tracks included “Take Your Time,” as well as “sammy” for the dog lovers in the crowd), the concert alternated between ukulele-driven acoustic and dreamy pop, creating an atmosphere both intimate and familiar. And all the while, the crowd cheered, clapped, and reminded both moriondo and mxmtoon to chug water between songs.

mxmtoon played a variety of songs through the night; there were the more optimistic tracks like “fever dream” as well as the quieter “sad girl hour” songs like “seasonal depression” (which hits especially hard this year, given how utterly miserable the weather has been for the majority of spring). It was a good reflection of her growth as an artist, from the ukulele-backed indie of the album The Masquerade to the cheery pop of dawn to the introspective acoustics of dusk. mxmtoon also played then-unreleased tracks from her upcoming album Rising (Rising has since been released in its entirety). “Coming of Age” was a particular favorite of mine, with its lyrics talking about mxmtoon growing up and recognizing and loving who she’s become.

And that’s part of mxmtoon’s strength as an artist: She releases songs that she knows will resonate with her audience. This resonance continued even between songs, as mxmtoon quipped about Netflix’s new queer teen romcom Heartstopper (which features both mxmtoon’s “fever dream” and moriondo’s “I Want To Be With You” on its soundtrack), coming out, and antidepressants. Boasting just under 3 million followers on TikTok, the Gen-Z platform of choice, mxmtoon understands engagement.

As we (hopefully) move beyond COVID-induced apathy, it’s worth wondering how the landscape of indie music will change—whether streaming and social media will continue their dominance of the zeitgeist, or we’ll outgrow the insular anxieties of bedroom pop. Or maybe it’s better to just enjoy the age for what it is. If nothing else, mxmtoon’s concert was excellent advertising for her upcoming album (Rising, out May 20).