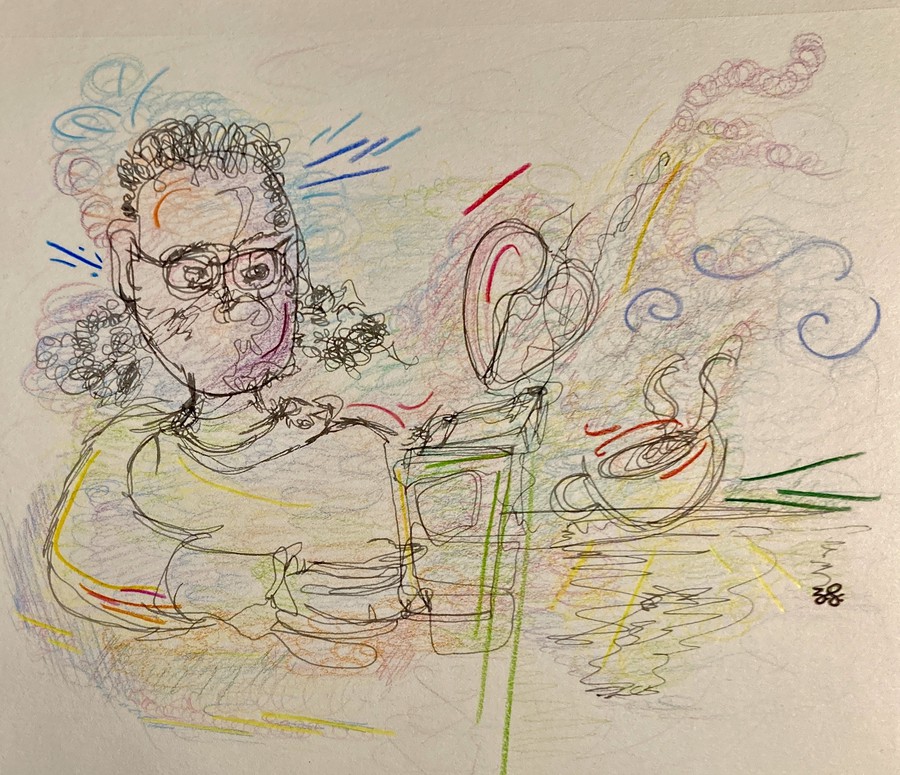 As I walked into the Regenstein Library on a Saturday afternoon during seventh week fall quarter, the sight of Ex Libris Café immediately stole both my gaze and my appetite. A wave of relief washed over me as if I had seen a mirage of an oasis in a desert. Coffee! I entered the crowded café and eagerly used my dwindling Maroon Dollars to purchase my usual latte before heading up to the second floor. I had successfully acquired a loyal companion to keep me energized for the large amount of work I was about to delve into. Reflecting on my reaction to the café as I took large sips from my cup, I came to realize how, over the previous few weeks, I had slowly become dependent on caffeine to keep me from feeling drowsy. I rarely drank caffeinated beverages before coming to UChicago, but within a year, switching to decaf would have given me a headache. My experience with caffeine is just one example of a troubling campus culture surrounding coffee shops and caffeine consumption at UChicago: We normalize and even glorify caffeine dependence. In order to create a campus environment that supports its students’ mental health, the University should spread awareness about caffeine dependence.

Before coming to UChicago, I only drank coffee about once or twice a week, early in the morning. Though my parents maintain a steady coffee regimen and would offer me a cup every so often—especially after late nights studying—I would usually decline their offer. Not only was I skeptical of how much a cup of coffee would actually help keep me energized, but I genuinely felt that I was able to rely on myself to sustain high enough energy levels to perform throughout the day. It is also notable to mention that I wasn’t surrounded by heavy coffee or caffeinated beverage drinkers in high school, so I never felt the urge to pick up the habit and begin consuming caffeine regularly. Back then, due to my lack of experience, I did not yet understand the hold caffeine has on its frequent consumers.

Walking into one of the many coffee shops on campus, students are greeted with the pleasant aroma of coffee grounds and the chatter of people studying and taking a break with their friends. For college students, coffee shops are useful social and study hubs where they can foster peer relationships and, more importantly, purchase their favorite caffeinated beverages. Many students have fallen into the ubiquitous working-adult routine by visiting a coffee shop on their way to class or the library.

With five student-run coffee shops on campus, a variety of other coffee shops on or near campus, and the ability to order coffee through third-party suppliers, students can easily overcome their fatigue whenever they please. As it turns out, an article from NBC Chicago states that according to data from GrubHub, UChicago students, in the 2016–17 academic year, were the most caffeinated college students in the U.S., ordering an average of 138 percent more caffeinated beverages than the national average. Though it may not come as a surprise to those familiar with the school’s academically rigorous environment, this statistic sheds light on a larger, more sinister phenomenon occurring at UChicago and other campuses across the country.

In my experience at UChicago so far, students’ overdependence on caffeine is all too present. It is not unusual for friends of mine to stop at Hallowed Grounds or Pret a Manger for a quick coffee during the afternoon and return to their dorms late at night to crack open their fridge and raid their stash of Red Bull or Celsius. Fueled by a constant rush of caffeine, students believe they are receiving the needed amount of stimulus to remain alert and productive during their hectic days, a habit they pass on to successive generations of students. In many ways, the caffeine-dependent environment students have created is the result of a habit loop to which incoming students succumb each year: Seeing second-years and upperclassmen fill coffee shops or carry around coffee cups entices new students to follow in their footsteps. Once I realized that I, too, had picked up the habit, it was easy to trace my steps back to one of my first days in the College. I was heading into Hutchinson Commons past Pret a Manger when I saw the long line stretching from the counter to the doorway and looked down at my ID full of Maroon Dollars waiting to be used. From then on, I began to adopt the coffee shop culture, rationalizing my purchases with my own fatigue and the fact that many people on campus, including close friends, drink caffeine. I had made drinking caffeine into a necessary tool for success.

As for the conclusion that caffeine is a substance needed to remain alert, there are many studies that would refute this statement. While caffeine does help keep habitual drinkers awake, it is not necessary for those who do not already drink coffee or other caffeinated beverages. A study in Neuropsychopharmacology concluded that coffee merely helps habitual coffee drinkers gain the alertness that non–coffee drinkers already have. Their ability to remain sharp without substances had been suppressed by their regular coffee intake.

Relying on caffeine to remain awake can have measurably adverse effects on students’ well-being. For example, a study performed at the University of New Hampshire seems to indicate that daily coffee drinkers’ dependence on caffeine masks their need for sleep. This causes them to stay awake longer at night and substitute a few hours of sleep for another two cups of coffee the next morning, creating a vicious cycle. A strong caffeine dependence could also lead to caffeine withdrawals, which induce anxiety and irritability. In essence, caffeine releases adrenaline into our body and subsequently triggers our fight-or-flight response. The added rush of adrenaline causes nervousness and jitteriness, which can lead to anxiety.

While, for the most part, the benefit of being more alert outweighs the costs of drinking coffee, we should all remain aware of our growing obsession with and dependence on caffeine in our time at UChicago.

Matthew Cabrera is a first-year in the College.