In Millennium Park, #CareNotCops Stands in Solidarity Against Boeing

Students protested the Boeing Company’s arms manufacturing and ties with the City of Chicago, claiming that Boeing profits from war and enables oppression globally. 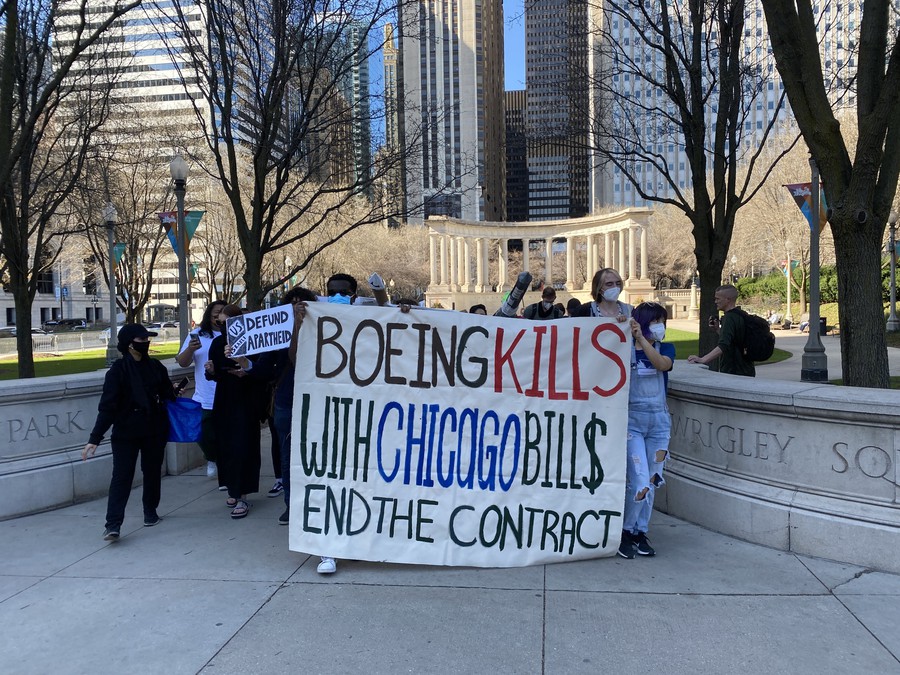 Members of UChicago #CareNotCops (CNC) joined students and activists in Millennium Park on Thursday, April 21, to protest aerospace manufacturer the Boeing Company and its relationship with the City of Chicago, claiming that Boeing profits off war and enables oppression globally.

About 25 people participated in the #BootBoeing rally, including activists from environmental group Rising Tide and Kashmiri solidarity group Stand With Kashmir. Students from UChicago and other Chicago-area universities, including Loyola University Chicago and Northwestern University, were represented among the activists. The protesters gathered in Wrigley Square and then marched to Boeing Gallery North, less than 500 feet from the Cloud Gate sculpture.

Activists carried large banners, one saying, “Boeing Kills With Chicago Bill$ / End The Contract” and another calling the Boeing Galleries the “Boeing Arms Genocide Galleries.” A set of posters outlined Boeing’s alleged involvement in war and oppression in regions around the world including Palestine, Kashmir, Yemen, the U.S.–Mexico Border, West Papua, and the Philippines.

The Boeing Galleries, which sit on the north and south sides of Millennium Park, were named for the company after it made a $5 million donation to fund the creation of the art spaces.

At Boeing Gallery North, activists spoke about Boeing’s ties to the City of Chicago. They then distributed chalk to write anti-Boeing messages on the pavement while security guards and Chicago Police Department officers watched from a distance. The speeches were interspersed with chants like “From Palestine to the Philippines, stop Boeing’s war machine.”

CNC organizer and UChicago third-year Warren Wagner spoke at the protest on behalf of CNC. Wagner’s calls for the abolition of the University of Chicago Police Department (UCPD) were met with cheers from the crowd, and they then spoke in support of the movement to “boot Boeing off Earth and send the UCPD with them.”

Wagner criticized the University’s financial investments, which, as The Maroon revealed in 2020, have ties to weapons manufacturers like Boeing, deforestation, and fossil fuels. They also stressed the importance of connecting CNC’s aims to movements like #BootBoeing. “We see how a lot of the same tactics used in the occupation and policing of the neighborhoods surrounding the University parallel warfare abroad,” they told The Maroon.

One of the organizers of the #BootBoeing campaign was Josue, 23, who declined to give his last name due to privacy concerns. He studied at UChicago before dropping out this fall, at the beginning of his third year.

Josue celebrated the City of Chicago’s choice not to renew a recently expired 20-year contract that offered Boeing tax credits in exchange for the relocation of its corporate headquarters from Seattle to Chicago in 2001. Ending this contract had been the initial goal of the anti-Boeing campaign.

The City’s choice not to renew the contract was not, as Josue noted, directly attributable to the #BootBoeing movement. Changing business priorities and the COVID-19 pandemic had reportedly left Boeing’s riverfront tower increasingly empty.

Protesters insisted that the expiry of the contract was not enough. They shared demands for Boeing to end its arms manufacturing as well as for the City of Chicago and the State of Illinois to cut ties with the company entirely. Pamphlets distributed at the rally took issue with the construction of a Boeing drone manufacturing facility at MidAmerica Airport in Mascoutah, Illinois, more than 250 miles south of Chicago. Defense and space contracting, primarily with government agencies, made up more than 42 percent of Boeing’s revenue in 2021, according to corporate filings.

In the minds of some protesters, there’s no room for compromise with a company they see as evil. “Even if they plopped a giant manufacturing factory in the center of Millennium Park and it [provided] thousands of jobs for working-class Black and brown people, at the end of the day, they’re still manufacturing weapons that are used to bring harm, violence, and death to every corner of the planet,” Josue told The Maroon. “No amount of jobs is worth that.”