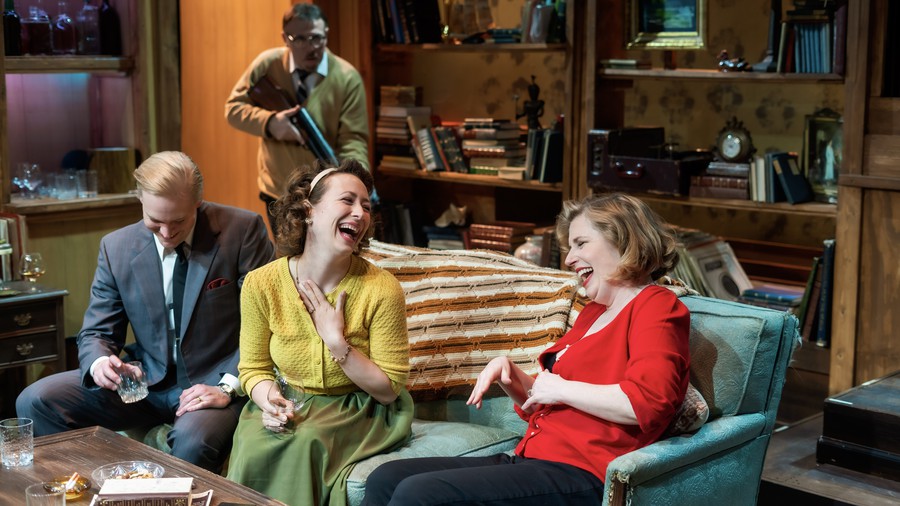 The performance space of the Invictus Theatre Company is small—smaller, certainly, than I anticipated, a black box on Chicago’s North Side set up to seat perhaps thirty guests a night for this season’s production: Edward Albee’s American classic, Who’s Afraid of Virginia Woolf? In this configuration, the audience, pressed close in four tight rows, takes up less space than the modest, cottage-style living room that stretches across the stage. The actors wear no microphones because the front row is close enough to reach out and touch them. Shattered bottles and violent shouts send the audience recoiling in their chairs. If nothing else, Invictus Theatre’s Who’s Afraid of Virginia Woolf? is an eminently personal experience.

Who’s Afraid, written and first produced in 1962, follows two couples—one older, one younger, and both discontent with their marriages—who share drinks late one night after a university faculty party. The older couple, George (James Turano) and Martha (Andrea Uppling), host the younger, sprier Nick (Keenan Odenkirk) and Honey (Rachel Livingston). George and Martha’s home is messy: Their marriage is in shambles, and their brief moments of affection always sour to insults and betrayal. The older couple drags Nick and Honey, a shotgun marriage for a child that never came, into their internecine conflicts as the night staggers toward dawn. Booze and tears flow as fists and insults swing. One by one illusions shatter under the harsh spotlight of truth exposed.

Albee won the Pulitzer Prize for Drama for three plays, but not for Who’s Afraid of Virginia Woolf?—in the ’60s, its crass language and themes of sexual infidelity were deemed obscene. Yet it's no surprise that Who’s Afraid has remained, above any of Albee’s other works, the most firmly entrenched in our social consciousness. At its heart, the show is timeless. The plot manages to avoid peculiarities of history, if not staying entirely abreast of them with its mentions of telegraphs and “the War.” Albee embeds his critique of the 1950s nuclear family in a brilliant and much broader discussion of reality and appearance, or as Martha shouts in the play’s third act, “truth and illusion!”

In the Invictus production, Turano and Uppling are brilliant costars, animated and explosive and anything but geriatric. Livingston’s slow descent into hysterics makes terrific and unnerving fare out of the play’s most marginal role. All three overshadow Odenkirk, who cannot seem to find the insidious charm or narcissistic rage that his role demands.

The Invictus production is demanding. It’s staged with two intermissions breaking up the play’s three acts. The production’s given runtime was three hours and ten minutes, including intermissions; the preview showing I attended ran three hours and forty minutes, including intermissions. It’s a formidable and perhaps indulgent length, brought on by the decision to produce the play in its original, unabridged form. The play’s 2005 Broadway revival helped to popularize Albee’s revised edition, shorter and with a few narrative tweaks, that’s now the standard choice for most productions.

Between its up-close presentation and daunting length, Invictus’s Who’s Afraid of Virginia Woolf? is devoutly involved. As fights between couples spill out on the stage, the other characters fade into the couch, into the bookshelf, or into the liquor cabinet, as spectators. The distinction between the spectators on stage and the spectators in the audience disappears. The audience and the actors stand (or sit) at equal distances from the conflict; our harrowed expressions are both mutual and honest. 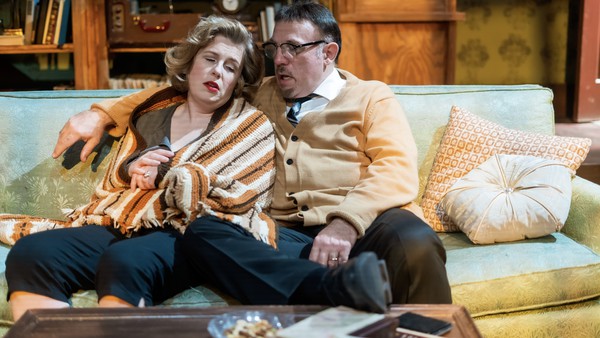 James Turano as George and Andrea Uppling as Martha.

The audience’s close proximity to the stage drives home a deep unease. Marital strife is intimate, it’s taboo, it’s hidden, yet suddenly we’re exposed to it. In fact, we’re participants in it; we’re voyeurs. We’re embarrassed and violently uncomfortable. We wonder if we should just step out so that the play can continue in solitude, undisturbed by watchful eyes.

This is what makes Invictus’s production both terrifying and brilliant. The play itself is about the exposure of the secrets on which the stability of a marriage rests. The disturbed and fraying relationship between George and Martha may dominate the show, but it’s the younger couple’s presence as witnesses that allows George and Martha’s conflict to take on monstrous and violent proportions. The potential for embarrassment and exposure before witnesses—before an audience—drives the conflict of the play. Invictus’s up-close and personal production feels like Who’s Afraid as it was meant to be staged, the perfect marriage of content and form. The whole production reminds us too that theater, particularly on the small scale, relies on an intimacy between performer and viewer that no blockbuster film or Broadway spectacle can hope to manipulate or reproduce.

Much of Who’s Afraid revolves around stories that the characters tell each other. Some of these appear fictitious yet turn out to be true; others appear true before turning out to be fictitious. Many of these stories, if not all of them, in fact lie somewhere in the in-between; they’re neither entirely fictitious nor entirely true. Albee seems to suggest that the very act of telling the story wills the story into reality. This fabrication of reality means the story can do real damage. The play’s flashes of physical violence—spare and always shocking—are rarely more disturbing than when the secrets the characters tell themselves, their stories, leap onto the stage and out into the open. The elaborate house of cards comes down with the full emotional weight of a high-rise.

I will not soon forget Who’s Afraid of Virginia Woolf? The Invictus production is disturbing and harrowing and likely to recall—as it did for me—those ugly moments in our own lives when we confront the secrets and illusions of ourselves and of our loved ones. I kept thinking during the show—in fact, I keep thinking, in the days afterwards—of my younger self huddled at the top of the kitchen stairs, catching soundbites of my parents shouting in what they thought was a dormant house. That is the sort of primal discomfort, the shattering of all privacy and taboo, with which Who’s Afraid leaves its viewer. For anyone with the emotional endurance, it’s not a production worth missing.