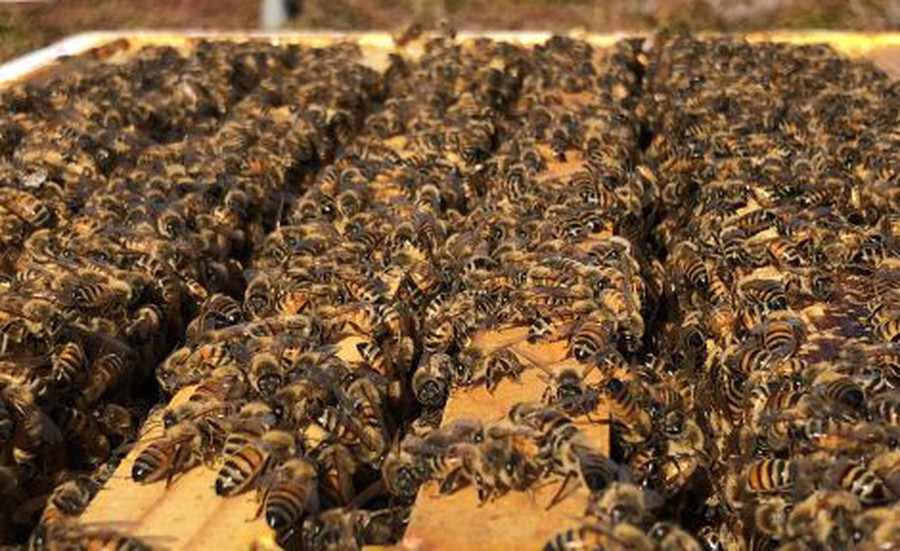 Phoenix Farms' beehives, located on the roof of Harper Court

Phoenix Farms is a blossoming recognized student organization (RSO) on campus spreading awareness of urban farming and beekeeping in Hyde Park. The club involves students in initiatives that range from harvesting honey from local bees to planting produce in gardens on campus. With these hands-on projects, the group aims to make such environmental activities accessible to all community members and promote sustainable ecological practices for urban settings.

“Given that we live in a city, [Phoenix Farms] is an opportunity to really come back to our roots and connect with our community in a way that you typically wouldn’t have the chance to,” fourth-year co-president Stephanie Zhang said.

Harper Hives, the beekeeping branch of the RSO, cares for thousands of bees that are housed in hives located at the First Presbyterian Church in Hyde Park. Members of the RSO learn how to don beekeeping suits and open up the hives to check on the health of the four different subspecies—Russian, Italian, Carniolan, and Saskatraz variants of the European honeybees—that reside in these hives. “It’s really rewarding seeing all the hard work the bees put into making their honey and being able to share it with them,” said fourth-year Angela Shi, a journeywoman beekeeper in the club.

By nurturing these hives and sharing their locally sourced honey with students on campus, Phoenix Farms seeks to promote the importance of bees in the environment. For members involved in Harper Hives, it is also important that this message is not limited to just honeybees as well.

Second-year Ian Olson, a journeyman beekeeper, explained, “We can’t overlook the role of native bees. Lots of native bees fill important ecological niches.... We should also keep in mind that keeping honeybees isn’t all we could or should be doing for urban ecosystems.”

Phoenix Farms also promotes urban agricultural initiatives through its farming branch Avant Gardens. Since 2011, club members and University personnel have worked together to manage the Young Garden, a plot that is located next to the Young Building and Smart Museum of Art. One can find a variety of edible fruits, vegetables, and herbs sprouting in the garden after seeds are planted during the spring quarter.

“These plants are meant to be harvested and enjoyed by the community,” head gardener third-year Emily Simon said. Every year, Avant Gardens also makes sure to grow pollinator attractors like milkweed and other plants that are native to the Chicago area. In this way, “the garden contributes to the ecosystem in which the campus is situated,” Simon added.

The scope of the club’s projects is not limited to the UChicago community. Phoenix Farms has formed partnerships with organizations throughout the city of Chicago to educate people of all ages about important pollinators and flora that sustain the environment. Over the past summer, club mem- bers led weekly workshops for children at a summer camp hosted by the Hyde Park Refugee Project.

In these workshops, kids engaged in hands-on projects that taught them about the importance of supporting the environment. One activity involved making “seed-bombs,” which are clay balls filled with soil and native wildflower seeds that can be planted anywhere to attract different pollinators. By the end of the summer, the children helped to establish a new garden plot filled with fruits and vegetables that they liked to eat the most.

Reflecting on the experience, co-president and fourth-year Bryan Gu said, “It was cool to watch the children realize that pollinators weren’t just bees and that there’s this whole intricate ecosystem that exists out there that goes from bees and pollinators and insects to even the food they throw on the ground.”

Inspired to expand the impact of the club’s community outreach activities, current members and alumni of the Phoenix Farms RSO also decided to also establish the group as a not-for-profit (NFP) organization separate from the University. The Phoenix Farms Not-for-Profit received the Harvard Consulting on Business and the Environment sustainability grant to support their projects, and their current goal is to estab- lish a food forest in Hyde Park. A food forest is a space that not only grows edible plants that can feed its surrounding communities but also imitates the ecosystem of the land surrounding it.

“A community garden could fall into disrepair, but a food forest will perpetuate itself because it is composed of perennial plants, which essentially take care of each other and form their own small microbiome,” said Grace Martin (A.B. ’19), a former RSO member and board member of Phoenix Farms.

For Tess Teodoro (S.B. ’21), former head beekeeper of the RSO and current NFP board member, the food forest project is an integral part of the organization’s mission to support the community.

“It hasn’t been fully implemented as far as we know on the South Side, where food deserts remain a challenge.... The idea that this is perennial, has minimal upkeep, and is constantly accessible as far as the seasons allow was really central to the idea of providing a sustainable service for the community,” Teodoro said.

The NFP hopes to launch the project in the spring after obtaining community input through a survey on what sort of produce is most preferred and how to make it accessible for as many members as possible.