Netflix’s "Don’t Look Up": Star-Studded, With Little New To Say

Adam McKay’s new climate change satire sets out to entertain, not to advance the climate conversation. 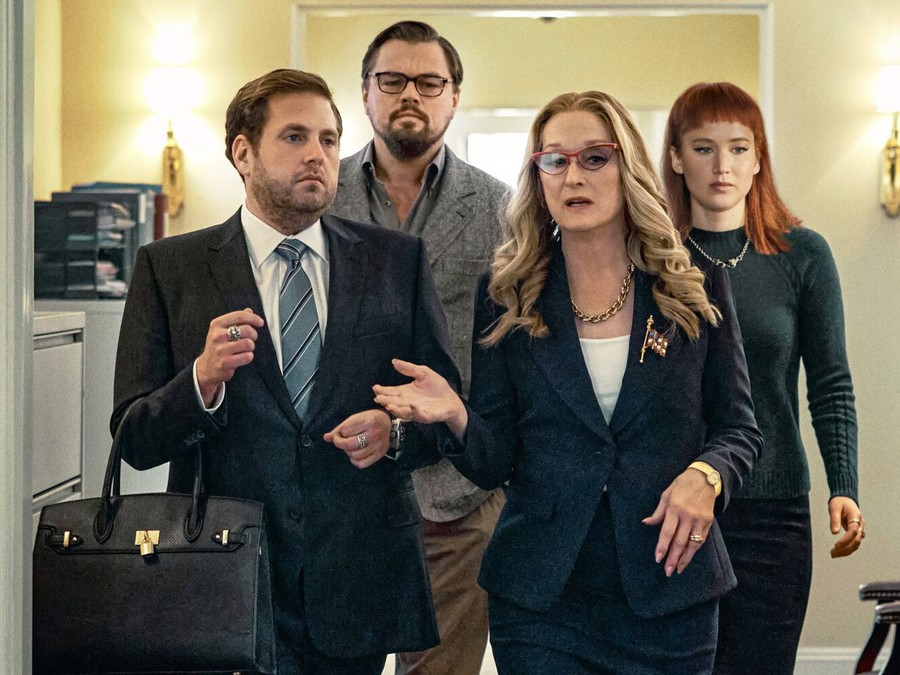 How do you make a movie about climate change? According to Adam McKay, the writer-director of Netflix’s Don’t Look Up, you make it about something other than climate change. The star-studded disaster movie, which debuted on streaming in December 2021, follows two scientists (played by Leonardo DiCaprio and Jennifer Lawrence) on their mission to warn an indifferent world about a comet hurtling towards the Earth.

The climate-focused satire is thinly veiled if veiled at all. DiCaprio and Lawrence attempt to use government channels, social media, print journalism, and celebrity appeal to convince humanity of its impending doom, only to find a world preoccupied with maintaining a status quo that’s destined to go up in flames.

If the premise sounds unoriginal, that’s because, on the whole, it is. Kid Cudi and Ariana Grande overstay their welcome as two celebrities whose public relationship makes for better headlines than an apocalyptic asteroid. Mark Rylance, an actor I’m typically partial to, is an odd choice for the tech-billionaire who convinces the public that the minerals in the asteroid will make everyone rich if only they wait to mine it. Meryl Streep features as the populist president of the United States downplaying the risk of disaster; she tells her followers “Don’t Look Up!”—a rallying cry to ignore the scientists.

The commentary tends toward the bombastic. At a run time approaching two and a half hours, the viewer is left wondering whether McKay set out to offer any unique criticisms of the way we discuss our climate or to simply rehash the jokes and tropes that dominate public discourse about contempt for the climate crisis. Did the viewer just watch a freestanding film or a series of Saturday Night Live sketches from the past decade stitched together in an effort to provide the illusion of narrative and purpose?

Ultimately, it’s no surprise that a movie juggling so many jokes, so many stars, and so many different social criticisms buckles under its own weight, shuffling on for far longer than it should. What McKay doesn’t seem to realize is that the true fun of the film doesn’t rest in the ingenuity of its premise so much as in the impressive roster of performers, from DiCaprio and Lawrence to Jonah Hill and Timothée Chalamet, whose secondary roles provide some of the film’s most memorable moments.

Don’t Look Up is made to entertain its audience, not to galvanize them into climate action. Fans of his other more serious work, like 2015’s The Big Short, will find much to enjoy in the film’s maximalist and often idiosyncratic style. But it’s hard not to wonder whether a film that leaves its audience thinking, “Well, at least I’m not like the idiots in that movie,” really sets out to critique our current culture or just languish in its stupidity. Climate change is very real—as real as a meteor flying through space—and it’s at least mildly disappointing that Netflix rallied such an impressive roster of performers only to offer satire that doesn’t advance any new conversation.

Has Adam McKay made the great climate change movie, a 21st century Dr. Strangelove? Hardly. The commentary is trite rather than fresh, and never subtle—it’s quite literally explosive. There are enough charming performances that the film yields a few memorable moments, but the full, untempered two and a half hours is likely too laborious for most viewers.